Germany under pressure to take sides in Nagorno-Karabakh conflict | Europe | News and current affairs from around the continent | DW | 22.10.2020 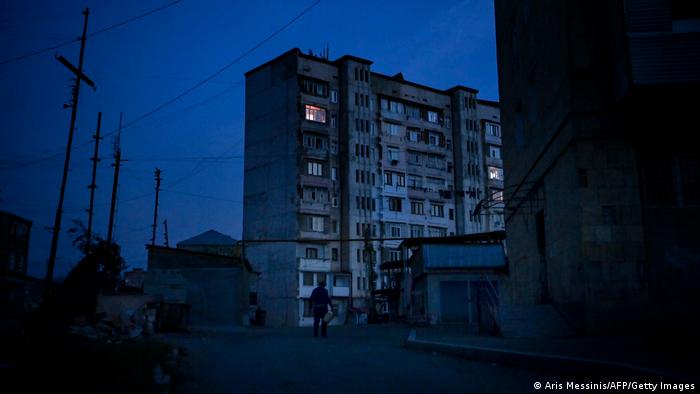 "It is now vital for Armenia and Azerbaijan to immediately resume efforts towards finding a peaceful and lasting solution to the conflict, based on the fundamental principles of conflict resolution," the statement continued.

Armenian Ambassador to Germany Ashot Smbatyan called for a less vague statement. "It is important that Germany condemn Azerbaijan's aggression and describe Turkey's role as being extremely negative," he told DW, pointing out that states such as the US, Russia, France and Canada had already done so.

"For 30 years now, Azerbaijan has been taking every effort to isolate Nagorno-Karabakh," Armenian Minister of Foreign Affairs Zohrab Mnatsakanyan said while speaking on DW's Conflict Zone. "Are we going to disregard the lives of our people?" he asked.

For his part, Azerbaijan's Ambassador to Germany Ramin Hasanov called on Berlin to condemn Armenia's "occupation" of Nagorno-Karabakh. "Germany has to send an important signal that the occupation must end," he told DW. "Since Germany is on the side of international law, we appeal for internationally recognized norms and principles to be protected."

'Azerbaijan has chosen the path of war': Armenia's foreign minister

Both ambassadors paid tribute to Germany's role as part of the OSCE Minsk Group, which has been trying to negotiate a peaceful resolution to the conflict for decades under the co-chairs of France, Russia and the US.

"As a member of the OSCE Minsk Group, Germany reaffirms its support of the Co-Chairs of this group as they continue their endeavors to find a negotiated solution," the German Foreign Office said in the above-mentioned statement.

However, Azerbaijan's ambassador criticized the most recent developments in the Minsk process: "It does not make sense to only call for a ceasefire. That's not so effective at the moment," he told DW, explaining that there had been a ceasefire for years already. "There have to be further steps," he insisted.

Armenia's ambassador accused Azerbaijan of wanting to sabotage the current peace process. He pointed out that "the Azerbaijani side continued its bombings" soon after the last humanitarian ceasefire was agreed.

Smbatyan also said Germany had a particular responsibility with regard to Armenia, pointing to the German parliament's passage of a 2016 resolution recognizing the atrocities in Armenia as genocide and acknowledging Germany's own unique historical responsibility.

"Azerbaijan today is a terrorist hub," he said, describing Turkey as a destabilizing factor. "We have been warning about this consistently. We have been seeing these destabilizing, aggressive policies all around Turkey's neighborhood, in the East Mediterranean, North Africa, the Middle East."

At a press conference in Berlin, Azerbaijani Ambassador Hasanov denied Turkish soldiers and foreign mercenaries were involved in the current fighting. He said though Turkey was a brother nation, such help was not necessary: "We have enough forces to keep occupying troops off our territory."

Speaking to DW, German Green party politician Cem Özdemir criticized "Azerbaijan's warmongering and Turkey's support of it" but also pointed out that "the military activities of the Armenian side went beyond mere defense."

He said he would welcome a more active role on Germany's part. "Parliament has acknowledged that Germany shared responsibility for the Armenian genocide of 1915," he explained. "That's also why the government should campaign in a much more active and visible way for peace in Nagorno-Karabakh, in conjunction with the co-chairs of the OSCE Minsk Group. And provide more help."

Merkel speaks to both sides

The Nagorno-Karabakh conflict has killed dozens of people since flaring up in late September. According to the German Chancellery, Chancellor Angela Merkel has since spoken to Armenian Prime Minister Nikol Pashinyan, who last visited her in Berlin this February, three times.

There are an estimated 80,000 to 100,000 people of Armenian origin living in Germany today, whereas Ambassador Ramin Hasanov estimates the number of  Azerbaijanis in Germany to be around 50,000.

A volcano near the Fagradalsfjall mountain in Iceland erupted in early August and has since been attracting onlookers from all over the world. The lava could flow for at least six months, say experts.