Ankara supports Azerbaijan's bid to retake "its own lands" in Nagorno-Karabakh, the Turkish defense minister said while talking to Moscow. Azerbaijan has been pushing for Turkey to be given a bigger role in peace talks. 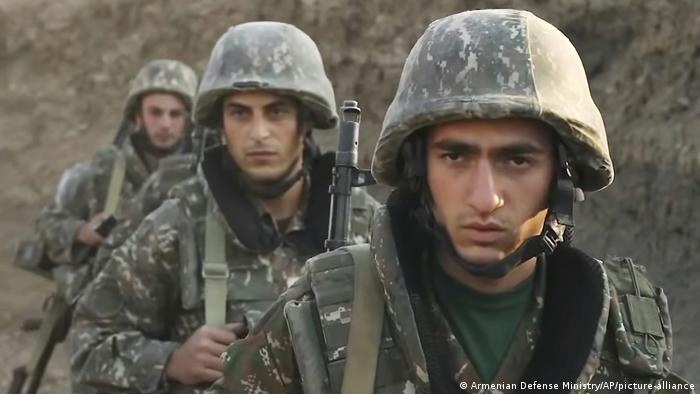 Amid a failing ceasefire in the disputed Nagorno-Karabakh region, Turkish Defense Minister Hulusi Akar restated Ankara's support for Azerbaijan's "campaign to take back its own lands." Akar made the comments during a telephone call with his Russian counterpart Sergey Shoigu on Monday.

The Turkish official also told Shoigu it was necessary for Armenia to end its attacks and "withdraw from the occupied lands."

The region of Nagorno-Karabakh is officially part of Turkey's ally Azerbaijan, but populated by Armenians and controlled by an Armenia-backed government. The latest clashes between Azerbaijani and Armenian forces have already claimed hundreds of lives. The two ex-Soviet states met to negotiate in Moscow last Friday with Russia's Foreign Minister Sergey Lavrov serving as a mediator. After 10 hours of talks, both sides agreed to a temporary ceasefire which went into effect on Saturday. However, both Armenia and Azerbaijan have since accused each other of launching fresh attacks.

Azeri officials have also emphasized the ceasefire was temporary and that they had plans to take more territory.

No room for Turkey?

In Moscow, the two sides agreed that talks about a more permanent solution would be mediated by the three co-chairs of the OSCE Minsk Group: France, Russia, and the US. The OSCE body also involves Turkey and several other regional powers as members. The body was formed in 1992 but has so far failed to achieve substantial change in the Nagorno-Karabakh conflict. Following the Saturday deal, Azerbaijan suggested giving Turkey a bigger role in the peace talks.

When asked about the suggestion on Monday, Russia's Sergey Lavrov said that no changes were envisaged in the talks format.

"The joint statement in Moscow confirms immutability of the negotiations process, the format of the talks," he was quoted as saying by the Azerbaijani SalamNews agency.

Ankara previously hailed the Moscow deal as an "important first step" but noted it would not replace a permanent peace treaty.

During the call between Russia's and Turkey's defense ministers on Monday, Turkey's Akar warned that "Azerbaijan will not wait 30 more years for a solution."