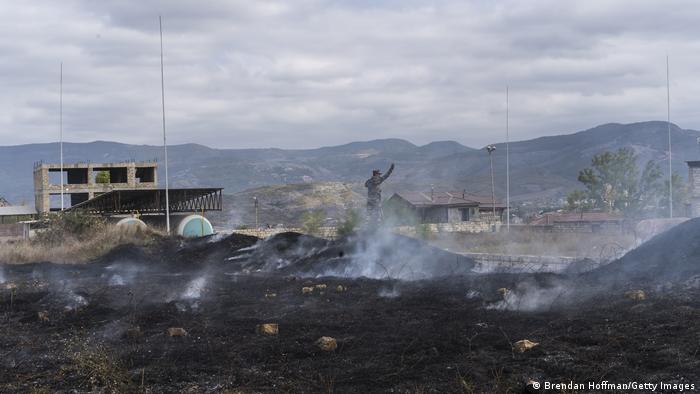 Armenian and Azerbaijani armed forces were locked in intense warfare over the disputed Nagorno-Karabakh province on Saturday.

Armenia said it would use "all necessary means" to protect ethnic Armenian from Azerbaijani forces, in the conflict that has already claimed over 230 lives.

Armenia-backed separatist forces had thwarted a "massive attack" by Azerbaijan and begun a counter-offensive, Armenian defense ministry spokeswoman Shushan Stepanyan said. "Heavy fighting is ongoing," she added, saying that three planes had been shot down.

Azerbaijan denied the shooting down of planes. President Ilham Aliyev said his country's army ''raised the flag'' in the town of Madagiz and taken seven villages.

An attempt to mediate by France was ignored, as the two sides continued to attack each other with rockets and missiles. Each side claimed to have destroyed each others' tankers.

Armenian armed forces have held back from entering the clashes so far. However, Armenian Prime Minister Nikol Pashinyan's administration said it would take "all the necessary means and steps" to prevent mass atrocities" by the forces of Azerbaijan and its ally Turkey.

Pro-Armenian Karabakh separatist leader Arayik Harutyunyan said he was on his way to the front line for what he described as the "final battle."

Baku and Yerevan have for decades been engaged in a simmering conflict over Nagorno-Karabakh, an ethnically Armenian part of Azerbaijan which broke away from Baku in a 1990s war which claimed some 30,000 lives.

Both Armenia and Azerbaijan have defied international calls for a ceasefire while accusing each other of starting the recent conflict.

The fighting, which broke out last Sunday, has seen the heaviest clashes since a 1994 truce between the warring sides. Some 200 people have perished, including more than 30 civilians. The region is Azerbaijan and under the control of local Armenian forces.

Barring a four-day war in 2016, the region has seen relative peace in the past quarter of a century. Russia, France, and the US called for a ceasefire and end to the clashes. However, Turkey has demanded the withdrawal of Armenian forces.

The conflict increases the likelihood of a wider regional war that could involve Russia and Turkey amid concern about stability in the South Caucasus, where pipelines deliver Azeri oil and gas to global markets.