As fierce fighting in the disputed region enters its sixth day, Armenia says it is ready to begin talks about a ceasefire with international mediators. Azerbaijan says it will only stop fighting if Armenia withdraws. 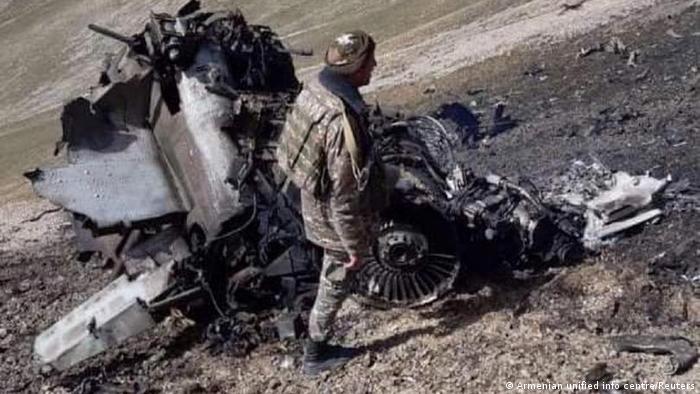 Armenia said on Friday it was ready to engage with the Organization for Security and Cooperation in Europe (OSCE) to reestablish a ceasefire in the breakaway region of Nagorno-Karabakh.

The country's foreign ministry said it "stands ready" to engage with France, Russia, and the United States, who co-chair the OSCE group of mediators to the conflict, "to re-establish a ceasefire regime."

The three countries on Thursday called for an immediate ceasefire in Karabakh, which is internationally recognized as part of Azerbaijan, but run by ethnic Armenians.

Armenia and Azerbaijan have been locked in a simmering conflict for decades over the disputed region and new fighting that erupted on Sunday has been the heaviest in decades.

Nearly 200 people have been confirmed killed, including more than 30 civilians.

Armenia and Karabakh declared martial law and mobilizated their militaries, while Azerbaijan imposed military rule and a curfew in large cities.

Talks to resolve the conflict have largely stalled since a 1994 ceasefire agreement.

Fears are growing that the conflict could expand into an all-out, multi-front war that could suck in regional powers Turkey and Russia.

France blamed Azerbaijan for initiating the recent conflict, with backing from its longtime ally, Turkey.

The Ankara government, meanwhile, insists that the three OSCE Group powers should have no role in peace negotiations.

President Recep Tayyip Erdogan said a lasting ceasefire could be achieved only if "Armenian occupiers" withdrew from the disputed region.

The US, Russia and France called for a ceasefire between Azerbaijani and Armenian forces. Turkey, an ally of Azerbaijan, said the three Minsk Group powers should have no role in eventual peace talks.