Despite urgent calls for a ceasefire, fighting between Azerbaijani and Armenian forces has intensified. The conflict has now crept closer to the Armenian capital Yerevan, where several drones were reportedly shot down. 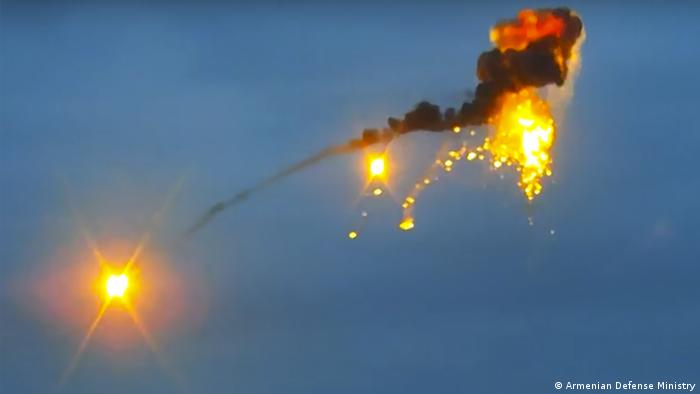 Armenia's military said it shot down four drones flying near the country's capital on Thursday night, as fighting over the separatist region of Nagorno-Karabakh raged on for a fifth day.

One of the drones was shot down by anti-aircraft missiles at a town just 16 kilometers (10 miles) outside the capital of Yerevan, defense ministry spokeswoman Shushan Stepanian.

The drones appeared in the provinces of Gegharkunik and Kotayak, Armenian Prime Minister Nikol Pashinyan said on Twitter, adding that the country's air defense forces were able to eliminate them.

The government post described the drones — or unmanned aerial vehicles (UAV) — as belonging to Azerbaijani forces.

Over 100 people, including civilians, have died and hundreds more have been wounded, including two French journalists, since fighting between Azerbaijani and Armenian forces erupted on Sunday.

It is the biggest eruption in a decades-old conflict between the former Soviet republics over the disputed Nagorno-Karabakh region since a 1994 ceasefire.

The disputed enclave in the Caucasus Mountains lies 50 kilometers from the Armenian border. Soldiers backed by Armenia occupy the territory, as well as some territory in Azerbaijan outside of the region.

Azerbaijan has said the only way to cease fighting is if Armenia withdraws from the region.

Armenian officials also claim that Turkey is interfering in the conflict by sending Syrian mercenaries to the region and deploying fighter jets to aid Azerbaijan. Turkey has denied sending mercenaries, but said it will "do what is necessary" to support its ally.

Israel has also been accused by Armenia of selling arms to Azerbaijan that are being used in the conflict — leading Armenia to recall its ambassador to Israel on Thursday.

Armenia and Azerbaijan have ignored growing international calls for a ceasefire — with the United States, Russia and France issuing a joint statement on Thursday condemning the clashes.

The three countries co-chair the Minsk Group, set up by the Organization for Security and Cooperation in Europe (OSCE) to encourage a peaceful, diplomatic resolution to the Nagorno-Karabakh dispute.