EU fails to act on Nagorno-Karabakh conflict between Armenia and Azerbaijan | Middle East | News and analysis of events in the Arab world | DW | 08.10.2020 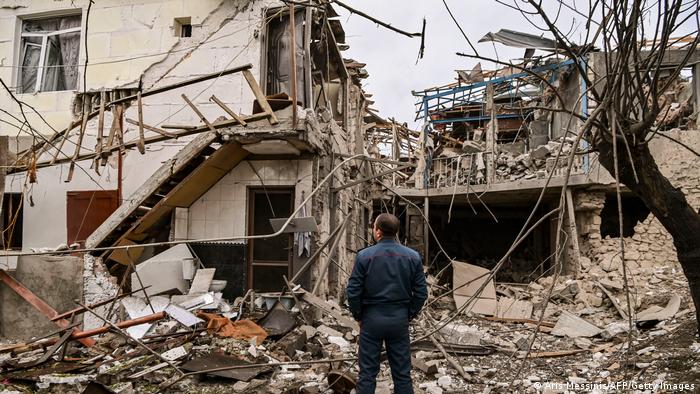 Hundreds of exiled Armenians gathered in front of the European Parliament building in Brussels on Wednesday to protest against the EU's failure to act against Turkey, which they accuse of stoking the current conflict in Nagorno-Karabakh.

"We demand that the EU take concrete measures," said Lucine Hayraoetyn, a political scientist who lives in Belgium. Many protesters had come from France, which boasts one of the biggest Armenian communities, after about half a million settled there after the Armenian genocide that began in 1915.

Others had come from the Netherlands. "We organized a bus from northern Holland," said Sepouh Abrahamian, who co-organized the protest. "All Armenians in Europe have to raise their voice so that the world realizes who the real terrorists are," he said, arguing that the governments in Turkey and Azerbaijan were destabilizing the whole region. 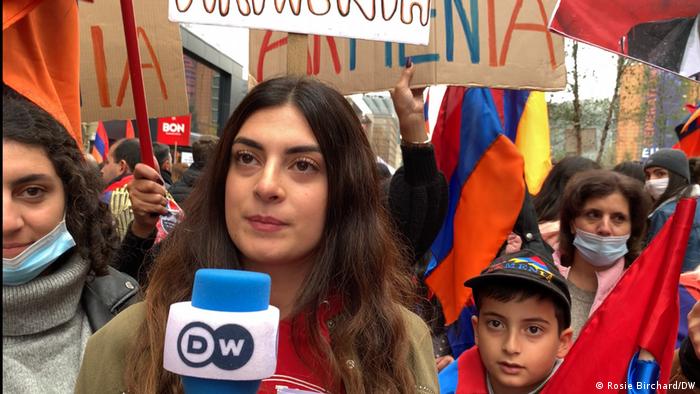 Armenians in Brussels demand action from the EU

The economics student Arakel Karapetyan accused the two countries of wanting to finish off the genocide that started in 1915, an accusation that was repeated throughout the day. "If we stand together, they will not be able to break us and we won't allow this to happen again," he said. His neighbor, for her part, burst into tears: "I want it to stop now! Children and innocent people are dying. I can't sleep, I can't eat because our compatriots are dying. Please world, put an end to this conflict!"

MEPs call for action against Turkey

During their debate, most members of the European Parliament agreed that something had to be done. "We demand that the fighting stop," said Sylvie Guillard, a French MEP, who is part of the liberal faction Renew Europe, arguing that Turkey should be punished for fueling the conflict.

Peter van Dalen, a Dutch Christian Democrat MEP, said that Turkish President Recep Tayyip Erdogan was trying to "recreate the Ottoman Empire" and that he could not be stopped with speeches, but only with tough sanctions.

The Bulgarian MEP Angel Dzhambazki accused Turkey of nurturing "imperial fantasies" and of exporting Islamist fighters into the region.

Some MEPs, like the protesters, accused Ankara of intending to finish off the genocide against Armenians that started in 1915.

The Swedish MEP Charlie Weimer from the European Conservatives and Reformists described the conflict as "a war of aggression, supported by Erdogan's jihadis."

Only the German MEP Michael Gahler from the European People's Party warned against "internationalizing" the conflict, saying that the OSCE Minsk Group should be left alone to do its work. The group, which is co-chaired by France, the Russian Federation, and the United States, was created by the Conference on Security and Cooperation in Europe in 1992 to encourage a peaceful, negotiated resolution to the conflict between Azerbaijan and Armenia over Nagorno-Karabakh.

Generally, most MEPs seemed to favor imposing sanctions on Turkey. However, when High Representative of the European Union Josep Borrell took the floor to respond, he appeared frustrated: "I think your message is clear, it has been repeated 65 times with different voices, but expressing the same concerns and the same request to act."

"But the European Council was clear that they consider that the framework within which to mediate and to act on this conflict is the OSCE Minsk Group co-chairs," he added. "We are going do what we can do as the European Union, with the resources we have in the diplomatic arena," he said, reminding the MEPS of the European Council decision to postpone the debate on imposing sanctions on Turkey to December. "I have to stick to that," he said.

Marc Pierini, a former EU ambassador to Turkey and currently visiting scholar at the Carnegie Europe think tank, said that regular diplomacy had never helped in this conflict. He had no illusions about Erdogan's motives, saying that he had surrounded Europe with smoldering conflicts, from Syria, to Libya, to Cyprus and Greece and now Nagorno-Karabakh. The aim, Pierini argued, was to destroy and dismantle the EU for domestic reasons. In this regard, Erdogan was on same wavelength as his Russian counterpart Vladimir Putin, he argued.

Pierini pointed out that Erdogan's timing regarding Nagorno-Karabakh was particularly clever: "The US is currently paralyzed by the elections and will be till the end of January at least. Russia has a defense pact with Armenia but it does not apply to the enclave."

This was one reason why Moscow had been reserved, he said. Moreover, "the Azerbaijani military is equipped with Turkish and Israeli drones that are extremely effective." While the planes and tanks that the Armenians have are less useful because of the difficult terrain. Pierini also added that he thought that the current "emergency" in Nagorno-Karabakh had been planned during routine maneuvers between Turkey and Azerbaijan a month ago.

He believed that sanctions should be imposed on Turkey but that it should be done right. Since the Turkish economy, particularly the arms industry, was vulnerable and Ankara was dependent on European technology, such as helicopter parts from Spain or German-made submarine motors, the EU could use this as leverage to raise the cost of Erdogan's political adventures.

Meanwhile, Richard Giragosian, the founding director of the Regional Studies Center (RSC), a think tank in the Armenian capital Yerevan, said that he saw a glimmer of hope in France's direct diplomacy because it acknowledged Russia' legitimate interest in the conflict. "This is also a reward for Russia's rare cooperation with the West by co-calling for a ceasefire."

Giragosian believed that French President Emmanuel Macron was reacting directly to Erdogan's greater strategy by trying to put a brake on Turkey's aggressive behavior in northern Africa, the Middle East and the eastern Mediterranean region.

He too argued that the EU as a whole had to give a more robust answer to Turkey's strategic ambitions which would not be satisfied by Azerbaijan's advance in Nagorno-Karabakh. He said that the EU had been "slow and ponderous" in its reactions and regretted that the bloc had not risen to the political and diplomatic challenges posed by the worsening security situation and the US's absence on the global stage.

"Despite years of diplomatic efforts for peace talks, Armenia and Nagorno-Karabakh are now alone, without a partner and with little hope that there will be serious negotiations."