Armenians in France plead for Nagorno-Karabakh intervention | Europe | News and current affairs from around the continent | DW | 22.10.2020 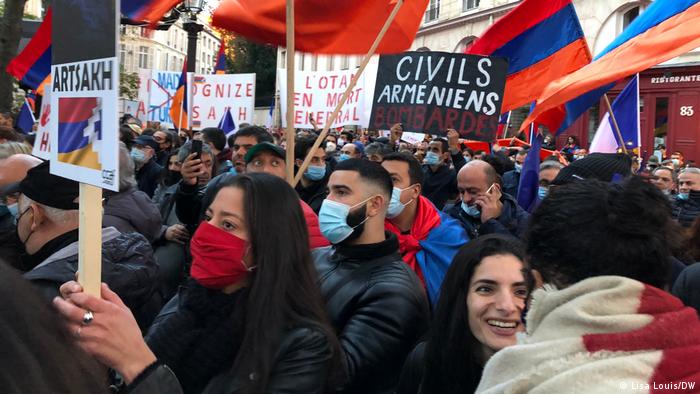 Dozens of women and men hurry along a street towards a square behind France's National Assembly in Paris. They are waving Armenia's red, blue and orange flag, or have it draped over their bodies. Some hold up signs that read "Recognize Karabakh," while many chant Hayastan, or Armenia.

The protesters are gathering on a Tuesday afternoon to demand France support Armenia in the conflict with Azerbaijan over the Nagorno-Karabakh region. After all, France harbors Western Europeweste's biggest Armenian diaspora with up to 600,000 members.

But, for now, Paris is showing restraint in its support for the Armenian side —  at least when it comes to actions.

"This is a cry from the bottom of our heart," Franck Papazian yells into a microphone, addressing the crowd that has since swelled into several hundred people. He is co-president of the Coordination Committee of Armenian Organizations in France (CCAF), which organized the demonstration in Paris and a dozen others across the country in recent weeks.

"We can't just let this massacre happen — we need peacekeepers in the region!" he pleads.

"Please, we are asking you. You won't be able to say afterward that you didn't know what was happening." 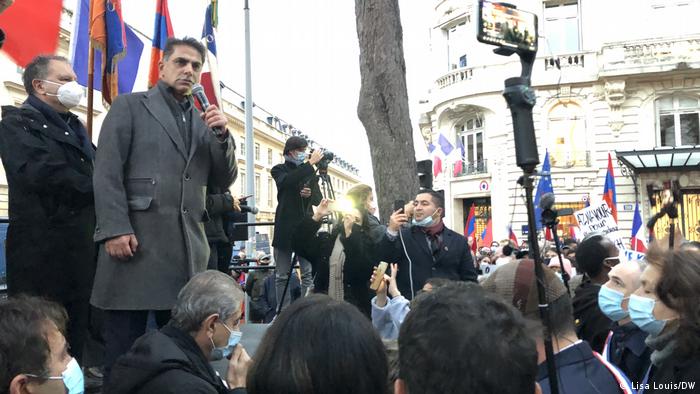 Turkey 'has crossed a red line'

The decades-old conflict over the region erupted afresh in late September. The ethnically Armenian region belongs to Azerbaijan but has been controlled by Armenians since the 1990s. Several hundreds of people have been killed in the recent fighting, while tens of thousands have been displaced, according to local officials.

He added that, as co-president of the OSCE Minsk Group, he has pleaded for an immediate ceasefire in the region. The organization was set up in 1992 to mediate in the Nagorno-Karabakh conflict and is also co-chaired by the US and Russia.

But two ceasefires, negotiated recently by Russia and the OCSE Minsk Group, were almost immediately breached with both sides accusing each other of violating them first.

Mediation efforts by the OSCE Minsk Group seem nevertheless to be France's only plan for now. When asked by DW if other measures, including sanctions against Turkey, were on the table, a source from the Elysée Palace referred back to the OSCE Minsk Group, saying the country was hoping a ceasefire could be established. 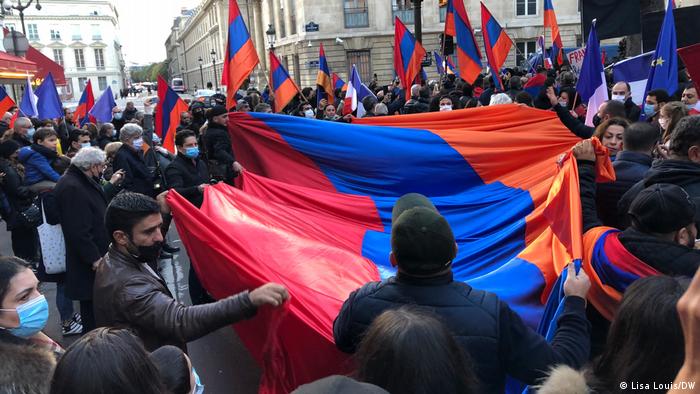 That clearly fell short of Talin Mungan's expectations, who traveled with a group of 20 other French Armenians from southern Marseille to join the protest in Paris. "France should immediately cut political and economic ties with Turkey," the 33-year-old tells DW, while wrapped in Armenian flags.

"This conflict is the continuation of the Armenian genocide in Turkey in 1915 and 1916, during which the country killed more than 1 million Armenians."

Mungan is referring to when, beginning in 1915, up to 1.5 million Armenians were killed by Ottoman Turks. Many scholars and countries, including the German parliament, have recognized the massacres as genocide. Turkey has repeatedly rejected the term.

At the time, Mungan's grandparents were forced to flee toward Turkey's mountains. There were hidden by Kurds, had to change their names, and pretend to be Muslims. "We can't stand on the sidelines while they massacre our brothers and sisters in Nagorno-Karabakh now," she says. 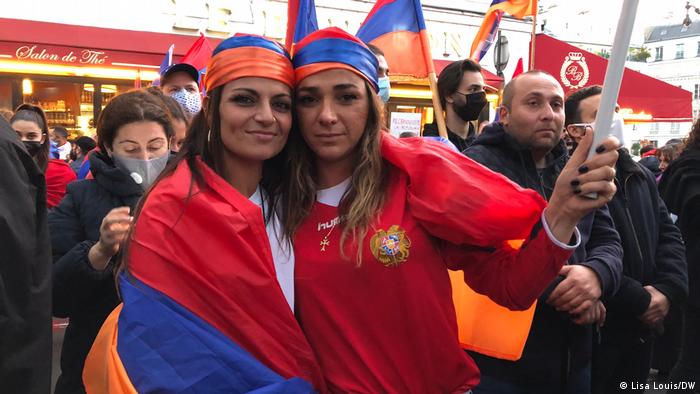 Talin Mungan (left) with her cousin at the demonstration in Paris

A few meters to her left, 40-year-old Samo, who does not want to disclose his last name, silently watches protesters' speeches. Originally from the western Armenian region of Ararat, he came to live in France with his three children 10 years ago.

"Two dozen of my friends and relatives in Armenia have gone to Nagorno-Karabakh to fight with our compatriots," he tells DW. "Of course, I fear for them, but I would do the same if I were there right now. We don't have a choice. We have to defend our country — if necessary, with our lives."

"After all, if Azerbaijan wins this conflict, they will certainly not stop there and try to also conquer the rest of Armenia," he adds.

But are such fears and comparisons with the mass killings of Armenians justified?

Mikaël Nichanian, a French Armenian historian and curator at the National Library of France, says they are. "Such a connection could even be made without the current Turkish involvement," he tells DW.

Nichanian added that Azerbaijanis slaughtered more than 20,000 Armenians in Baku in Azerbaijan in September 1918 — under the supervision of the Turkish army. "Both Azerbaijani and Turkish identities are based on a hatred of Armenians, who have been their scapegoats for more than a century and whom they consider as their arch enemies."

"That's how these countries unite their citizens in order to maintain their authoritarian regimes," he adds.

Against that backdrop, even lawmakers of President Macron's own party, La Republique en Marche (LREM), are pleading for more active support for the Armenians. Some have signed a resolution calling on the government to recognize Nagorno-Karabakh's independence.

This includes Anne-Laurence Petel, an LREM member of Parliament. "This is not only about the Caucasus," she tells DW. "We need to put Turkey's President Recep Erdogan in his place. He's leading expansionist politics, also in the Mediterranean Sea where he's fighting with Greece and Cyprus over gas reserves and maritime rights."

Unchecked, Erdogan could one day invade Cyprus and Greece, she says. "We need to show him that the EU won't have that by setting boundaries now."

Guillaume Kasbarian, another LREM lawmaker, also wants more action. "France's former President Jacques Chirac was strongly pleading in favor of several NATO airstrikes in the Yugoslav war in 1999, which finally forced Yugoslavian President Slobodan Milosevic to back off and prevented an escalation," he says to DW.

"We need to bare our teeth now, send peacekeepers and impose sanctions — being part of the OSCE Minsk Group just isn't enough," he adds.

Protesters at the square behind Parliament remain determined to do their part to force France's hand. "We won't stand back while there's a massacre," Papazian shouts into the microphone. Then, he announces another meeting for in a few days' time.

"Each one of you should bring along another 10 people so that our protest grows bigger and bigger," he shouts.

"Yes!" the crowd cheers back.

"Time is of the essence — tomorrow could be too late," says Papazian.