Munich Security Conference: Joe Biden tells Europe ′America is back′ | Germany | News and in-depth reporting from Berlin and beyond | DW | 19.02.2021

The US president spoke of an "inflection point" that would decide "the future direction of our world" at the MSC, while Angela Merkel, Emmanuel Macron and Boris Johnson reaffirmed the trans-Atlantic partnership. 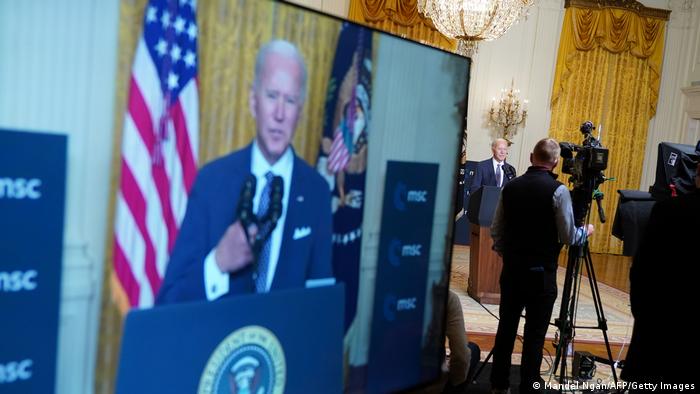 For the first time ever, the acting US president spoke at the Munich Security Conference (MSC) to re-affirm the trans-Atlantic alliance, which many world leaders feared had been left in diplomatic disarray by his predecessor, Donald Trump.

"I speak today as president of the United States and I'm sending a clear message to the world: America is back," President Joe Biden, beamed in from Washington DC, told the conference on Friday. "The trans-Atlantic alliance is back."

The sense of relief was palpable on the stage of Munich's Bayerischer Hof hotel, where MSC head Wolfgang Ischinger, a seasoned German diplomat and former ambassador to the US, was visibly excited to be hosting a three-way video-link with Biden, German Chancellor Angela Merkel, and French President Emmanuel Macron.

But there were also hints that the alliance was not simply going to be a return to an old world order. Biden warned against re-establishing Cold War power blocs, while Macron spoke of a re-balancing of trans-Atlantic ties — especially when it came to defense.

Macron reiterated his vision of a stronger European Union that would "take much more of the burden of our own protection."

The key issue here, as it had been under Trump, was defense spending and the contribution to NATO — but the tone was conciliatory. Biden has reversed Trump's decision to withdraw troops from the US bases in Germany, and both Merkel and Macron reiterated their commitment to increasing defense spending to meet NATO's target of 2% of GDP.

"We have to increase our defense investment," Macron said. "This is a way to re-balance the trans-Atlantic relationship. Having an EU much more invested in defense makes us much more credible within NATO."

Macron said this was especially important because the US had shifted its focus to becoming a "Pacific" power.

Nevertheless, in a series of 15-minute speeches, the three leaders reaffirmed their mutual commitment to an alliance that European Council President Charles Michel, speaking later, called "the backbone of the rules-based international order."

"Let me erase any lingering doubt, the US will work closely with our EU partners," said Biden.

The US president also warned of the encroaching threat to democracy in both the US and Europe.

"We are in the midst of a fundamental debate about the future and direction of our world," he said. "We are at an inflection point between those who argue that given all the challenges we face, from the fourth industrial revolution to the global pandemic, that autocracy is the best way forward, and those who understand that democracy is essential to meeting these challenges."

For Chancellor Angela Merkel, who spoke after Biden, the president's words provided a cue to invoke her favorite theme: The importance of multilateralism for facing humanity's various existential threats. And Biden's election, it seemed, had reinvigorated the notion: "This year the prospects for multilateralism are much better than they used to be and that has a lot to do with Joe Biden," she said.

UK Prime Minister Boris Johnson, speaking from London towards the end of the three-hour event, also found it in his heart to welcome Biden's election: "As you've seen and heard earlier, America is unreservedly back as the leader of the free world and that is a fantastic thing," Johnson said. "We're turning a corner and the countries we call the West are drawing together and combining their formidable strength and expertise once again."

This year's MSC was a modest affair, where only the major Western powers and international organizations were represented.

The "Special Edition" was conceived as a curtain-raiser ahead of a projected "full" MSC later in the year, when — if COVID restrictions allow — Ischinger hopes to welcome top officials from China and Russia, and many other countries for the usual round of panel discussions and impromptu side-line meetings in the warren of luxurious suites in the Bavarian hotel.

But on Friday, Biden was the main attraction, and he used the opportunity to address the rise of China's power.

The US president called for Chinese companies to be held to the same standards as US companies. "We have to push back against the Chinese government's abuses and coercion that undercut the foundations of the international economic system," Biden said.

He also warned of the threats posed by Russia and what he considered an attempt to weaken democratic systems. "The Kremlin attacks our democracies and weaponizes corruption to try to undermine our system of governance," he said.

The German chancellor, meanwhile, stuck mainly to her main point: That only global alliances could tackle global problems like the coronavirus pandemic, the threats to the climate and biodiversity, and terrorism.

She celebrated the steps taken by the new US administration to rejoin the WHO and the Paris Agreement, the extension of the new START agreement, and the readiness to return to the Iran nuclear deal.

She talked about the need for a united strategy regarding China and Russia, but also the need for dialogue with those countries. She brought up the importance of the COVAX program, especially in light of the distribution of Chinese and Russian vaccines in developing countries.

While the four Western leaders reasserted their bonds, the heads of various international organizations appeared at the MSC to make their annual pleas on behalf of the global south.

Secretary-General of the United Nations Antonio Guterres laid out all the problems facing the world: the coronavirus, climate catastrophe, inequality, a pushback against women's rights, and the erosion of the nuclear armaments agreement. "2021 must be the year to get back on track," he said.

Like the Director-General of the World Health Organization (WHO) Tedros Ahanom Ghebreyesus, Guterres pointed out that vaccinating those in the world's rich countries first might well backfire: Left unchecked in the global south, COVID-19 could easily mutate and render the vaccines useless.

As Ghebreyesus put it, "The longer it takes to suppress the virus everywhere, the more opportunity it has to change in ways that could make vaccines less effective… we could end up back at square one."

The WHO chief gave three demands to realize the power of the global vaccination drive: Funding and donations of doses to COVAX, full vaccination information from the manufacturers, and for people to call for vaccine equity.

Bill Gates also spoke at the MSC, a year after he had warned the conference of the threat of global pandemics. He called it a "tragedy" that the world had not prepared itself properly before the outbreak of the coronavirus pandemic.

He laid out a plan to invest in capacities for research and manufacture of vaccines and drugs to battle not only COVID-19 but other common infections.

"We have to be thankful to Germany, who's led the calls for this COVAX," Gates said.

He believed that with current production and investment, vaccinations in the developing world would be six to eight months behind the richer countries.

Has Angela Merkel's Germany given China too much leeway?

Debate has intensified about Angela Merkel's efforts to tighten ties with China. The question is whether Merkel ushered in an era of smart engagement — or one of dangerous dependency on an authoritarian superpower.