France′s Macron under fire for political lurch to the right | Europe | News and current affairs from around the continent | DW | 30.11.2020 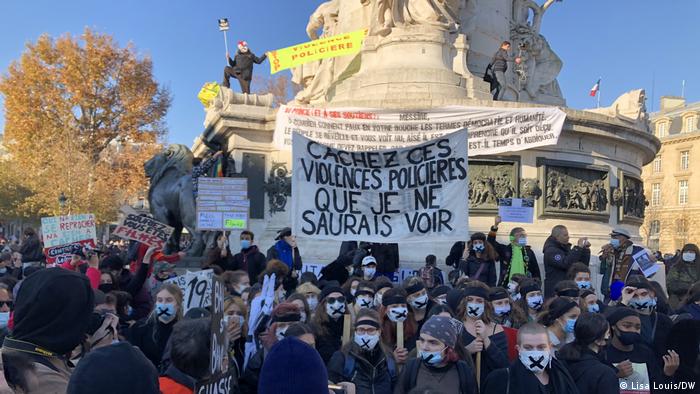 Public demonstrations have been a rare sight in protest-prone France since the beginning of the coronavirus pandemic.

But over the weekend, many felt it was time to make their voices heard again. Between 133,000 and 500,000 people — according to the police and organizers, respectively — demonstrated in more than 70 cities across France against a proposed security law, even though the country is still under partial lockdown.

The new law is meant to increase police protections, particularly through article 24, which would make it a criminal offense to publish images of on-duty officers with the intent of harming their "physical or psychological integrity." On Monday, however, a parliamentary majority appeared to bow to public pressure, saying it now planned a "complete rewrite" of the controversial section.

"The bill will be completely rewritten and a new version will be submitted," said Christophe Castaner, head of the LREM party of President Emmanual Macron, which has a majority in the National Assembly.

Many French citizens fear increased police protections would leave them vulnerable to police violence — a fear made even more pressing by the recent forced evacuation of a migrant camp in central Paris and the violent arrest of a Black music producer. Officers taking part in both operations are now under investigation, in part because footage of both events was made public.

New law would 'lead to even more police brutality'

The videos were a profound shock for Santiago Kadeyan, a 19-year-old medical student who was among the protesters at Paris' Place de la Republique on Saturday. 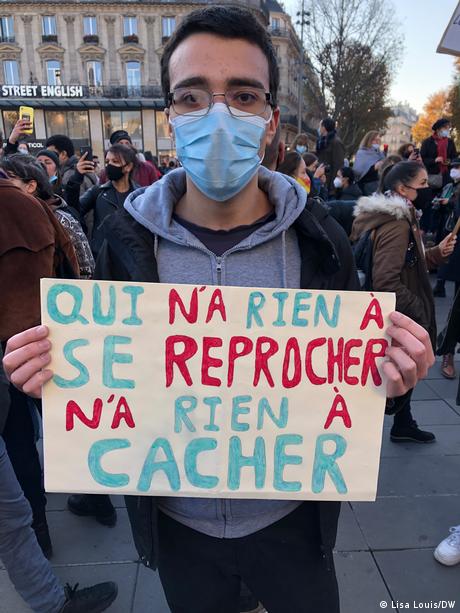 "The new law would also give the police more powers, allow them to use drones during demonstrations, [give them] more money — while restricting our right to defend ourselves," Kadeyan told DW. "That will certainly lead to even more police brutality."

The demonstrators in Paris, numbering at least 45,000, were from various ethnic and professional backgrounds and included teachers, psychologists and journalists. Those in the last group believe the draft law would curtail press freedom, and they're not entirely reassured by the news that the government plans to rework the bill.

"I really fear this will have a huge impact on our work," Adeline Queraux, a Paris-based journalist at a national daily, told DW. Queraux has been a regular at protests since she was little, but Saturday was the first time she felt afraid while demonstrating.

"I am scared of the violence — the atmosphere is really aggressive now, with no restraint, and the government is lurching ever more to the right," she said.

It's not just the proposed security law that has people concerned about the government's rightward shift. A new policing scheme could mean that journalists will need accreditation to cover demonstrations, even those taking place in public. The government will soon table legislation to fight radical Islam, strengthening control of Muslim groups and limiting home schooling — but there are no plans to prevent discrimination against Muslims. And a provision in a new law on university research funding has effectively banned demonstrations on campus — this in a country where students have historically played an important role in protest movements.

'We are now at a watershed' in Macron presidency

Sebastian Roche, a senior researcher at the French National Centre for Scientific Research, called the draft laws an acceleration of a trend he has been observing since President Emmanuel Macron came to power in 2017.

"Macron was elected as being left- and right-wing, and he offered a well-balanced program," he told DW. "But he has almost exclusively implemented right-wing policies, and opinion polls show we are now at a watershed: Macron has lost the support of almost all his left-wing voters. And so he's engaging in Thatcherite politics — a law-and-order approach with tougher sanctions, more police, more prison spaces."

Read more: Muhammad cartoon row: What you need to know

That law-and-order approach won't be enough to convince voters ahead of the next presidential election in April 2022, thinks Bruno Cautres of the Paris Institute of Political Studies (Sciences Po). "The French need security — but also in a social way. They are worried about their public services and unemployment," he said. "Macron also has to satisfy those needs or he hardly stands a chance in the next presidential election."

But Jean-Baptiste Moreau, a lawmaker and spokesperson for Macron's party LREM, denies that the government is swinging to the right.

"Law and order is not a right-wing approach — it's also left-wing. There's no freedom without security," he told DW. "Also, we can't leave this topic to the far-right Rassemblement National (RN) — we need to come up with our own, less radical solutions."

'There is a red line': LREM lawmakers

But discontent with the new approach is increasing, also within government ranks.

Cecile Rilhac is one of 10 LREM lawmakers who voted against the draft law when it passed the National Assembly last week. An additional 30 LREM members abstained from the vote. The law is still expected to head to the Senate for approval in January — though the government could decide to withdraw the controversial article completely by then, a move Rilhac would support.

"We are at a turning point and need to show the government that there is a red line — it should not lean further to the right or we won't be much different from the RN," she told DW. 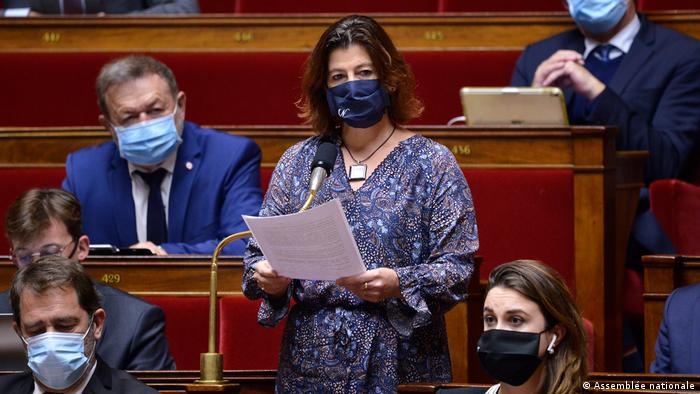 Along with a few other LREM lawmakers, Rilhac is working to set up another, more left-wing political party ahead of the 2022 election — although that party would still be part of Macron's parliamentary block.

Other lawmakers have already left LREM, including Aurelien Tache, who joined a Green parliamentary group in May.

"I had to leave — I felt like I was betraying my voters. Macron has almost only put in place right-wing measures limiting civil liberties and supporting big companies. He has done nothing to fight discrimination and poverty," he said. "And with this new security law, he has reached a whole new level — he really wants to become the champion of the right," he added.

But researcher Roche thinks Macron's strategy could work, under one condition.

"He has a good chance to be reelected in 2022, as long as he's facing RN leader Marine Le Pen in the second round runoff," he said. "If, however, left-wing parties and the Greens presented a common candidate, Macron could have to run against their candidate. Then, the outcome of the election could no longer be taken for granted, precisely because Macron hasn't done much to appeal to left-wing voters."

In any case, Macron seems unlikely to win Kadeyan's vote in 2022. "Macron has two years to prove that he's capable of basic human empathy and decency," said the protester. "If he doesn't, I'd just vote blank in case of a Le Pen-Macron duel."