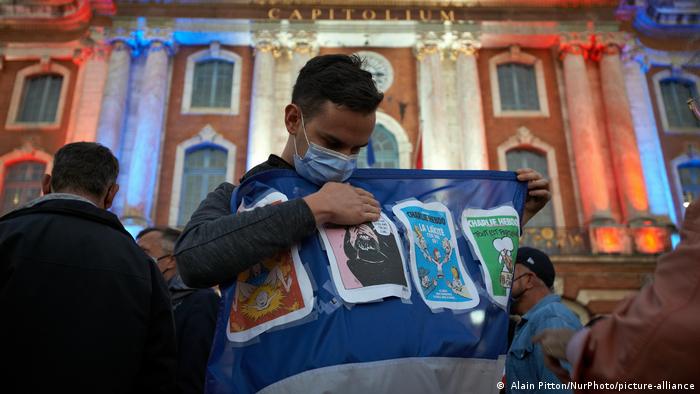 Five years later, and after another terrorist attack, there's a sense of deja vu. Today's protests are smaller. But the horror is the same, following the brutal decapitation of Samuel Paty, a middle school history teacher, after he displayed cartoons of the Prophet Muhammad in a class on free speech.

The same mocking cartoons which inspired the Charlie Hebdo attacks — and last month's stabbing of two people in Paris — are again testing the limits of France's vaunted secularism, or laïcité. Clashing views of faith and free speech are on the line. Feeding the tensions, some experts say, is a broader sense of stigmatization and disenfranchisement felt by many French Muslims, who represent Western Europe's largest Islamic community.

Now, as President Emmanuel Macron and his centrist government have vowed an all-out war against radical Islam, critics have said the strong defense of secularism is only exacerbating the problem. Instead of providing a neutral space for the country's melting pot of beliefs, as it's intended, secularism — enshrined in a 1905 law separating church and state — has become a flashpoint.

"There's a political culture that has problems with Islam," said Farhad Khosrokhavar, a prominent sociologist and expert on radical Islam. "And this political culture, laïcité, is a problem." Secularism has become 'a civil religion'

Authorities insist there is no disharmony between moderate Islam and French values. They instead fault communitarianism, a term used in France to suggest an inward-looking view of society that is often, although not exclusively, linked to conservative Islam. More recently, Macron has replaced communitarianism with separatism in his lexicon.

Some observers have said that same inward view helped fuel Paty's murder, with authorities citing an online hate campaign launched by a disgruntled parent of a student in Paty's class. That campaign, they say, motivated 18-year-old Chechen refugee Abdoullakh Anzorov to kill Paty.

In its fight against communitarianism over the years, the French government has introduced bans on religious symbols in public schools and offices and outlawed full-body Islamic swimsuits, or burkinis, in public swimming pools and beaches, the latter cast as a hygienic measure.

In September some lawmakers, including from Macron's own party, recently walked out of a session of the National Assembly during a speech by a veiled student leader — although she had broken no laws with her hijab.

Read more: The long shadow of the Saint-Michel terrorist attacks

"Laïcité was once a way to manage the relationship between government and society," said Khosrokhavar. "But it has become a kind of civil religion, with its codes, its prescriptions."

As he paid homage to Paty at a national memorial in Paris on Wednesday, Macron offered up an emotional defense of France's secular values. He said they provided the space for free and critical thinking, and even the right to mock a religion — although not a person.

"We will not give up cartoons," the president vowed at the ceremony in the courtyard of the Sorbonne University.

Macron's government has responded to Paty's murder with muscular action, carrying out dozens of raids against suspected Islamist networks early this week, temporarily shutting down a mosque in a Paris suburb for relaying a denunciation against the teacher and vowing to expel radicalized foreigners and dissolve organizations with extremist ties. It also plans to unveil legislation in early December to fight separatism, with Islamist extremism in its crosshairs.

Calling radical Islam a "warlike ideology," National Rally leader Marine Le Pen — considered for now as the president's top opponent in the April 2022 presidential election — has called for "war legislation" to match it, including an immediate halt to immigration.

Others, however, fear the authorities have gone too far. Among the most prominent groups targeted for dissolution is the Collective Against Islamophobia in France (CCIF). Hard-line Interior Minister Gerald Darmanin has described the NGO that offers legal aid for Muslims as a "threat to the Republic."

Darmanin has linked the CCIF to Paty's killing, ostensibly because the disgruntled father behind the hate campaign against the teacher sought the group's help. CCIF head Jawad Bachare has rejected such accusations, and several rights groups have protested the group's possible dissolution.

"The government was unable to protect its citizens and it needs a scapegoat," Bachare said in an interview earlier this week. "And that's the CCIF."

Stirring up the debate is a government plan to "renew" the Secularism Observatory, a government advisory body, to reportedly bring it more "in line" with the fight against separatism. The body has sometimes gone against state and local authorities on matters like the burkini ban on beaches, which it said was illegal.

Remarks made Tuesday by Darmanin during a TV interview also haven't helped matters. Speaking with broadcaster BFM TV, he suggested "separatism" extended even to supermarkets.

"I do not criticize the consumers but those who sell them something. I understand very well that halal meat is sold in a supermarket, what I regret is the aisles," he said. "So you have the aisle for Muslims, the kosher aisle and then all the others ... why specific aisles?"

Such moves may resonate with French voters, shaken by a string of Islamic terror attacks in recent years that have left more than 250 dead. But some may question their timing, coming 18 months ahead of the presidential election.

A survey this week by the Ifop polling firm found an overwhelming majority of respondents considered France's secular values were in danger, and that radical Islam was at war with the country.

"Laïcité is not against religion but allows everyone to live his religion or be atheist," said Elisabeth Gandin, who joined thousands at Paris' Place de la Republique to protest the attack against Paty. "I don't agree with the Charlie cartoons, but I'm on the streets to defend the right to say things some may not like."

Bolstering those views may be another recent Ifop survey suggesting that 40% of Muslims, including more than three-quarters of those under 25, put their religious convictions ahead of the country. Those figures were far higher than for non-Muslims, although skeptics have questioned how the survey's questions were framed.

Mainstream Muslim leaders have expressed outrage at Paty's killing, echoing arguments about the dangers of radical Islam while also warning against stigmatizing the Muslim community as a whole.

"We cannot allow on French territory words, activities, actions, calls for hate without punishing them," Tareq Oubrou, the imam of Bordeaux mosque, told France Info radio. Still, he said, ordinary Muslims are doubly hit, "as both French citizens and Muslims."

Analyst Khosrokhavar believes France's fierce interpretation of secularism has paradoxically helped fuel radicalization. He notes the country became Western Europe's biggest exporter of jihadi fighters to Syria, even though others, like Germany and Britain, also have large Muslim populations. Intolerant views about headscarves, he claims, have helped push some conservative Muslim women toward fundamentalism.

"The majority feel they are targeted by this laïcité, which becomes a kind of symbol of neo-colonial rule and for them, a denial of their dignity," Khosrokhavar said, referring also to his interviews with multiple middle-class Muslim men, many not particularly religious, for an upcoming book.

Teachers, especially in France's immigrant-heavy suburbs, say they must also tread carefully in dealing with secularism as they are on the front lines of explaining its principles.

"There is a penetration of a religiosity that increasingly structures students and feeds a radical vision," said Iannis Roder, a history teacher in the Seine-Saint-Denis region northeast of Paris, which is home to one of the country's largest populations of North African and Black immigrants. "It manifests itself in really basic things, like some students refusing to listen to music during Ramadan," he told French radio.

"Tackling free expression by showing caricatures of the Prophet [Muhammad] — you have to weigh the consequences," she said, declining to be identified as she had not received her school's authorization to speak to the media.

The teacher has spent years on projects to explain the Holocaust and other sensitive events, taking her often skeptical students on field trips to see history up close.