Paris, Lyon and Marseille held solidarity demonstrations for the French teacher beheaded in an Islamist terror attack. Samuel Paty was killed days after showing a caricature of the Prophet Muhammad. 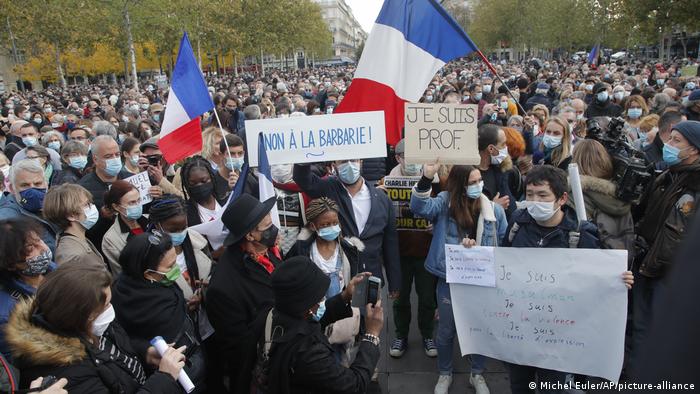 Thousands of demonstrators across France took part in protests on Sunday to support freedom of speech and to pay tribute to a French teacher who was beheaded outside a school near Paris after discussing caricatures of Islam's Prophet Muhammad in class.

"You do not scare us. We are not afraid. You will not divide us. We are France!" tweeted Prime Minister Jean Castex, who was among those gathered in Paris. "I am a teacher for freedom of speech," read one sign at a solidarity rally in Marseille

History teacher Samuel Paty was decapitated on Friday by an 18-year-old Moscow-born Chechen refugee who was shot dead by police.

The teacher had been the target of online threats for showing the cartoons in class, with the father of one schoolgirl launching an online call for "mobilization" against him, France's anti-terror prosecutor Jean-Francois Ricard said.

Witnesses said the young man, named as Abdullakh A., was spotted at the school on Friday afternoon asking pupils where he could find Paty.

On Saturday, hundreds of pupils, teachers and parents flooded to Paty's school to lay white roses.

The editors of the satirical magazine Charlie Hebdo called for the demonstration in Paris on Sunday afternoon together with the organization SOS Racisme and teachers' unions.

"It is absolutely important to show our mobilization and our solidarity, our national cohesion," Education Minister Jean-Michel Blanquer told France 2 television, calling on "everyone [to] support the teachers."

The solidarity rallies came as French authorities say they have detained an 11th person following the atrocity, including four family members of the attacker, who had been granted a 10-year residency in France as a refugee in March.

The Paris prosecutor said a text claiming responsibility and a photograph of the victim were found on the suspect's phone.

He also confirmed that a Twitter account belonging to the suspect posted a photo of the victim's body minutes after the attack. The message in the Tweet indicated the attack was motivated by the teacher showing caricatures of Muhammad in class.

Many demonstrators in Paris on Sunday held signs which used the slogan "Je suis prof" (I am a teacher) or "Je suis Saumel" (I am Samuel), echoing "Je suis Charlie" that became the rallying cry of solidarity marches in 2015 following the deadly attack on the offices of the satirical magazine.

Suspects accused of links to the Charlie Hebdo attacks are currently before the courts in a trial that is expected to run until mid-November.

Charlie Hebdo's former office was the site of a cleaver attack just a few weeks ago after it republished some of the cartoons of Muhammad ahead of the ongoing trial.