French officials have said an 18-year-old refugee originally from the Russian republic of Chechnya beheaded a teacher in suburban Paris. The French president has called the gruesome murder an "Islamist terrorist attack." 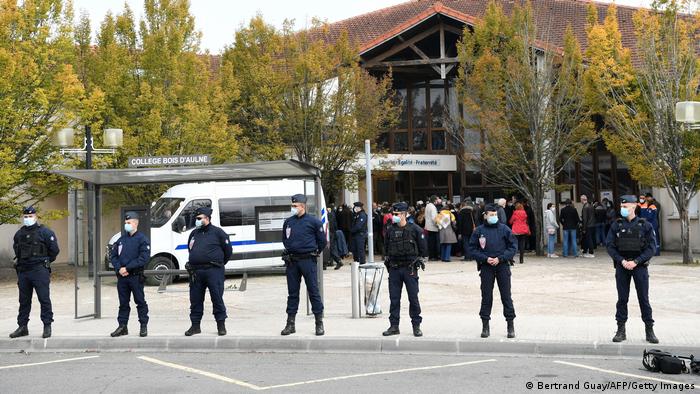 The suspect in a gruesome knife attack on a street in suburban Paris was identified as an 18-year-old Moscow-born Chechen refugee, French anti-terrorism authorities said during a press conference Saturday.

Police were called to the area after receiving reports of a suspicious person loitering near the victim's school. They found the dead victim and saw the teen nearby. He was shot dead after allegedly threatening officers, who found the suspect had been armed with a knife and a pellet gun.

Anti-terrorism prosecutor Jean-Francois Ricard said officials found a photograph of the teacher's body and a text claiming responsibility for carrying out the killing on the suspect's phone. Ricard said that the suspect had approached students outside of the school and asked them to point out the history teacher.

Officials said Paty had recently showed cartoons of the Prophet Muhammad as part of a class discussion on freedom of expression, and a few parents had complained.

Nine people have been detained in connection to the killing, including the suspected attacker's grandparents, parents and 17-year-old brother.

The French investigators said they were treating the attack as "a murder linked to a terrorist organization," adding that the suspect was not known to intelligence services, and had been granted a 10-year residency in France as a refugee in March.

Chechnya is a Muslim-majority Russian republic in the North Caucasus. France has offered asylum to many Chechens following a war between Russian forces and Islamist separatists in Chechnya in the 1990s and early 2000s.

Sergei Parinov, spokesman for the Russian embassy in Paris, said the "crime has no relation to Russia because this person had lived in France for the past 12 years," Russia's state-run news agency TASS reported Saturday.

Teacher had been threatened online

Ricard said that the father of a student had called for Paty's dismissal and launched an online call for "mobilization" against the teacher after the freedom of expression lesson in Paty's classroom in early October.

The man shared Paty's name and posted the school's address on social media only days before the attack. He also said in a social media video that Islam had been "insulted" at the school.

The anti-terrorism prosecutor did not say, however, whether the alleged attacker had any links to the school, students or parents, or if he had acted independently.

Freedom of expression vs. extremism

On Saturday, parents and teachers paid tribute to Paty outside the school. A parent of one of Paty's students told France's AFP news agency that, according to his son, the teacher had told Muslim students to leave the classroom ahead of the lesson and that he "didn't want to hurt their feelings."

"The whole country stands behind its teachers. Terrorists will not divide France, obscurantism will not win," Macron said after visiting the scene Friday.

In a sign of solidarity, the hashtag #JeSuisSamuel (I am Samuel) is trending on social media, echoing the #JeSuisCharlie hashtag following the 2015 attack on the offices of French satirical magazine Charlie Hebdo, which had published cartoon images of Muhammed.