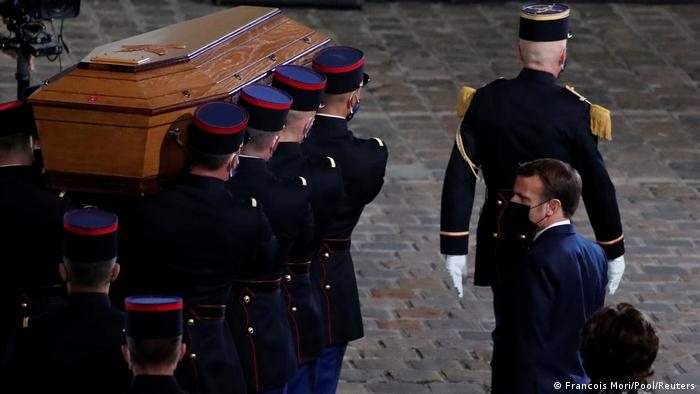 Macron described Paty as one of the 'quiet heroes'

Mourners gathered at the Sorbonne University in Paris on Wednesday for a high-level ceremony dedicated to late Samuel Paty. The history teacher was beheaded by an 18-year-old Moscow-born ethnic Chechen for showing students caricatures of Prophet Muhammad.

"We will not give up cartoons," France's president, Emmanuel Macron, told the crowd of some 400 mourners on Wednesday.

Uniformed pole bearers brought in the coffin to the Sorbonne courtyard accompanied by the song "One" from the Irish rock band U2, at the request of Paty's family. 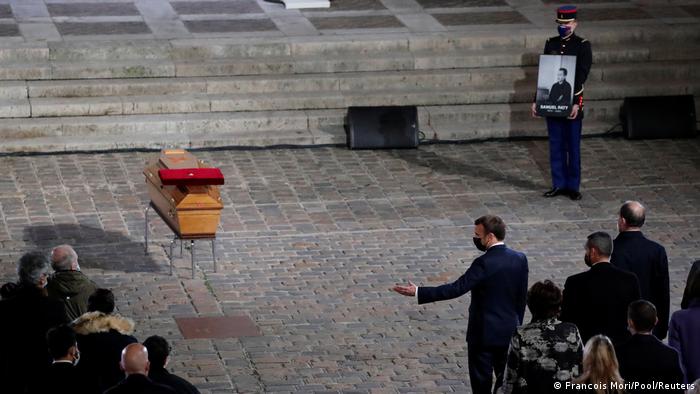 Macron posthumously awarded Paty with the Legion of Honor, France's top civil award. In an emotional speech, the French president added that Paty was slain for representing the secular, democratic values of the European country.

"Samuel Paty became the face of the Republic on Friday," he said.

DW's Marina Strauß reported that Macron's speech focused on Paty "as a person and as a teacher" rather than a victim.

Prosecutors and political leaders have linked the gruesome murder to the lesson on free speech, which the 47-year-old had held several weeks earlier.

On Wednesday, Macron also slammed "cowards" who gave Paty's name to "barbarians" who then took his life. The remarks come just hours after prosecutors said they were seeking terrorism charges against seven people, including two teenage students, over Paty's murder. The students allegedly pointed out the teacher to the attacker in return for money.

The 18-year-old assailant reportedly told them he was planning to beat the teacher up and force him to apologize.

Meanwhile, nine of 16 people held over the murder were released from custody late Tuesday, including four members of the killer's family and three students.

Police have carried out several raids since the killing, while the government has ordered a mosque outside Paris closed for six months, and plans to dissolve a group it said supported Palestinian militant group Hamas.

Macron has announced that the pro-Hamas group, the Sheikh Yassin Collective, would be dissolved for being "directly implicated" in the murder. Paty's killing sparked an outcry across France, with public figures calling the murder an attack on French values.

Paty was attacked shortly after leaving the junior high school, where he taught in a suburb outside of Paris. Prosecutors said the attacker had approached students outside the school and asked them to identify Paty as he left for his home.

He became the target of an online hate campaign after he showed students the same controversial images of the Prophet Muhammad that sparked a violent attack on the offices of satirical magazine Charlie Hebdo five years ago.

Investigators found a photo of the teacher and a message claiming responsibility for his killing on the cellphone of his killer, an 18-year-old originally from the Russian region of Chechnya. He also tweeted images of the teacher's decapitated body before he was shot dead by police.