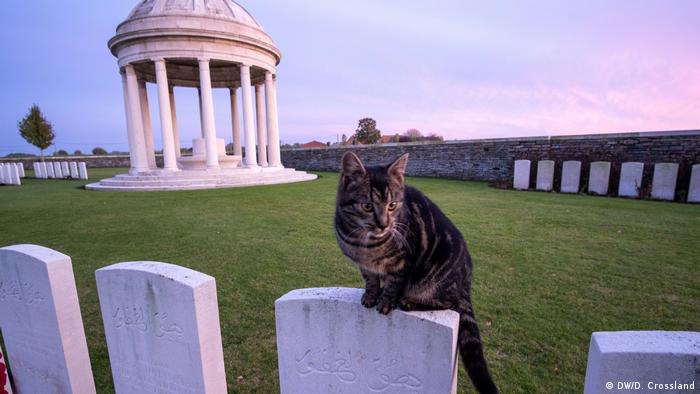 The giant Menin Gate in the Belgian town of Ypres echoes with the mournful tune of the Last Post played by buglers from the local fire brigade.

The ceremony, watched by hushed school groups, has been repeated every night at eight o'clock since 1928 apart from the years of German occupation during the Second World War. It commemorates soldiers who fought and died for Britain in the First World War.

The walls of the gate are covered with the names of 54,607 soldiers who were killed in Belgium and have no known grave. Among them are 412 soldiers from India including Muslims such as Bahadur Khan of the 57th Wilde's Rifles, who fell during the First Battle of Ypres on October 28, 1914, and Nur Alam of the 40th Pathans, killed on April 26, 1915, during the Second Battle of Ypres.

The role played by these soldiers and their 2.5 million fellow Muslims who fought for Britain, France and Russia in a war not of their making has been under-researched in comparison with the extensive accounts of Western troops in poems, diaries and histories. 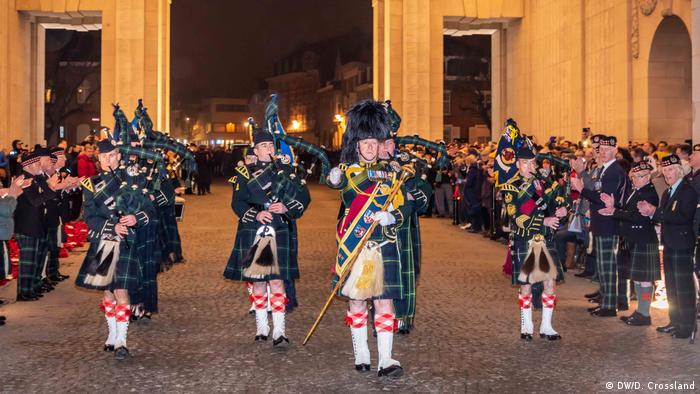 A Scottish military band passes through the Menin Gate, which records the names of 54,607 soldiers with no known grave

Luc Ferrier, the Belgian founder and chairman of the Forgotten Heroes 14-19 Foundation, plans to change that. He is convinced the Allies would have lost the war without Muslim soldiers. Raising public awareness of their contribution could help counter growing anti-Islamic sentiment in Europe, and give immigrant communities a stronger sense of belonging, he said.

"Originally, the objective of the foundation was to discover how Muslims from the former colonies served alongside the Allied forces," he told DW. "The biggest surprise was how much respect and loyalty there was between all these people of all faiths in the most gruesome circumstances, the trenches of the World War I.

"Among the personal diaries we found are numerous heart-warming accounts of Muslim, Christian and Jewish soldiers fighting side-by-side, sharing their experiences and accommodating each other's culture, music, food and religious practices, despite the difficult conditions in the trenches. 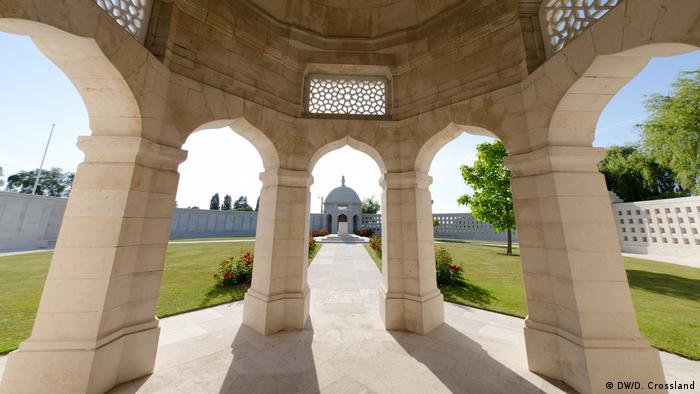 The Neuve-Chapelle Memorial commemorates more than 4,700 Indian soldiers and laborers killed on the Western Front

"Chaplains, priests, rabbis and imams went out of their way to learn Arabic, Hebrew, English and French in order to conduct religious burials of the dead on the battlefront. If soldiers then could accept and accommodate each other in the trenches during wartime, what's stopping us from doing the same today?"

The First World War centenary events that culminated last year with the anniversary of the armistice on November 11, 1918, coincided with a rise in the kind of nationalism that spawned the "war to end all wars."

Right-wing populists across Europe are targeting immigrants but also the European Union, set up after the Second World War to bring lasting peace to the ravaged continent. 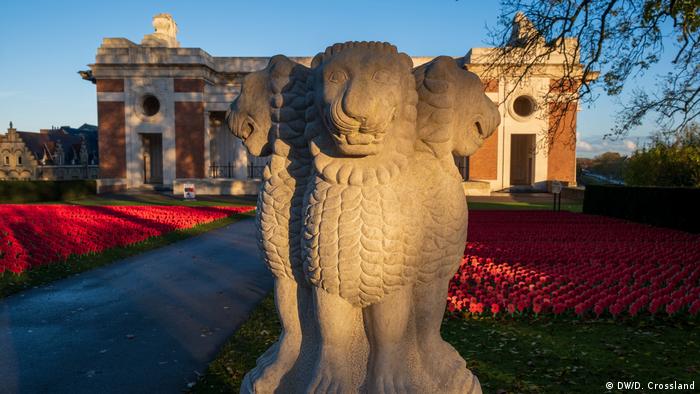 Ferrier, who is not Muslim, created the foundation in 2012 after discovering the diaries of his great-grandfather who fought in the First World War. "I was impressed by the enormous respect he had for his Muslim brothers in arms from all these continents," he said.

When he tried to learn more, he found there was a dearth of literature on Muslim troops. The foundation has enlisted the support of researchers worldwide who helped unearth and translate historical documents.

The research has been compiled in a book, "The Unknown Fallen," containing stories and photos that convey the Muslim experience in the war. The foundation plans a second book in 2021 incorporating research from Germany, Austria, Hungary and the Ottoman Empire.

"I personally don't believe that racism was a motive to hide this part in history," said Ferrier. "It was just that nobody cared, including the Muslim world."

In India, which lost over 70,000 troops in the war, the returning troops were tainted by having fought for the British cause at a time when India was pushing for greater autonomy.

When German troops marched into France in August 1914, the French hastily summoned soldiers from French North Africa — Algeria, Morocco and Tunisia — while the British called troops from across its empire including India.

They arrived in Marseille in their fezzes, turbans and brightly colored uniforms, and crowds welcomed them as saviors. They were quickly dispatched to the front.

Troops from the British Indian Army, consisting of Muslims, Sikhs and Hindus, with Muslims making up around a third, were in the thick of the fighting almost from the start. They reinforced exhausted British troops just in time to stop the German army breaking through to ports on the English Channel in the First Battle of Ypres in 1914. 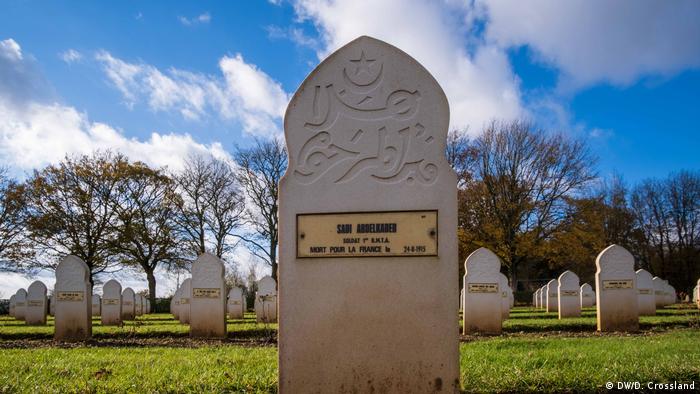 They were volunteers, trained and experienced soldiers, but like Western troops they were unprepared for the inferno of shells, machine guns and poison gas they were thrown into.

"Just like a turnip is cut to pieces, so a man is blown to bits by the explosion of a shell," wrote a Pathan soldier from northern India. "In taking a hundred yards of trench it is like the destruction of the world."

Officers made efforts to provide troops with halal food and there was a high death rate among Indian cooks who risked their lives to German shells to serve the men chapatis and hot curry.

The Germans treated Muslim prisoners well, even building the country's first mosque at a prisoner-of-war camp in Wünsdorf near Berlin, in an attempt to persuade prisoners to change sides. Not many did. Notre Dame de Lorette, France's biggest war cemetery, with over 40,000 soldiers, was once one of the bloodiest battlefields of World War I

The Muslim presence is evident in cemeteries up and down the Western Front that stretched 700 kilometers (435 miles) from the North Sea to the Swiss border.

In France's biggest war cemetery at Notre Dame de Lorette, the headstones of 576 Muslim soldiers stand facing Mecca. They have been desecrated with anti-Muslim graffiti three times in recent decades.

Ferrier said the foundation's work is important to counter claims from extremists on both sides that Islam and the West were incompatible.

"What we have found proves otherwise," he said. "We still have an enormous amount of work to do."

Captain Hans Langsdorff rescued his crew of more than 1,000 men by scuttling his ship, the Graf Spee, rather than fight a hopeless battle in 1939. His daughter says it’s time to honor his moral courage. (01.10.2019)

Germany's Muslims feel increasingly threatened after a number of recent bomb scares at mosques. Now, the heads of the country's leading Muslim associations want the government to take protective action. (24.07.2019)