Raising over €200,000 from the public, volunteer archaeologists have explored a German World War I trench fortress that was about to be bulldozed for a housing development. They found more than 100 fallen soldiers.

After promising preliminary investigations three years ago, Belgian archaeologist Simon Verdegem was determined to comprehensively excavate a still-intact segment of a renowned set of German World War I trenches. They were located on the valuable high ground of Hill 80 in the village of Wijtschate ("Whitesheet" to the British soldiers) near Ypres (or "Wipers") — a strategically crucial city in western Flanders that was contested for almost the entirety of the war.

Verdegem was convinced the site would prove unusually bountiful, but he also had a darker suspicion. Wijtschate was where Germany's first attempt at "Blitzkrieg" — charging through Belgium towards Paris via the northern Channel ports — ground to a halt.

As soldiers first dug in and trench warfare set in, the various armies had no idea what a brutal, static conflict was about to develop. Systems for removing fallen soldiers' remains to the back of the lines had not been established. The first soldiers who arrived in Wijtschate had been advancing several kilometers every day in the preceding weeks; they were not expecting to stay put for the next four years.

As a result, Verdegem strongly suspected that the site would hold an unusually large number of bodily remains. In the end, he and the Dig Hill 80 team uncovered the remains of more than 130 soldiers, of various nationalities — including a pair of mass graves thought to contain Bavarian troops likely buried in haste in 1914 by their comrades after what became known in German as the "massacre of the innocents at Ypres." 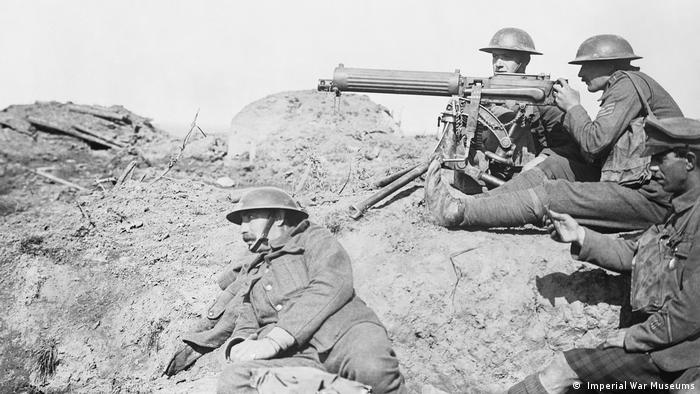 But the land's developer, planning to build new homes on the site, could not cover the costs of a full excavation, despite being willing to spend some money on the effort. Afraid this potentially precious site would go the way of a recently developed sports center a few meters away, Verdegem dug in his heels.

"I asked him to give me more time, to see if I could find solutions," Verdegem told DW at the dig earlier in July. There followed a crowdfunding campaign that raised over €200,000 (more than $240,000), covering around two-thirds of the total costs. "We've even had really big donors, who then later gave more."

The project concluded its work on Friday. It attracted prominent patrons, including British comedian and history buff Al Murray, and the British and German historians Robin Schaefer and Peter Doyle, who have written a collaborative book about ordinary soldiers' World War I experiences called Fritz and Tommy.

University College London was on site on the day DW visited, while at the end of every day, a drone would fly over the site. It was sending data back to Virginia Tech in the United States, which is working on a 3-D model of the trench fortress. Such academic institutes are paying their own way to get a look at the site.

Meanwhile, every chance to subsidize the project was utilized — not just crowdfunding. Visitors were welcome for VIP tours. Contribute a little more, and enthusiastic amateurs could come and be an archaeologist for a day, or longer. There's even a box of souvenir t-shirts and other merchandise available at the dig site, and the website, of course.

"You see those diggers over there, the small ones, they're here on discount," Verdegem told DW. "We got a reduced rate, so long as it didn't come with a driver. But that's OK, we have guys here who can use it." 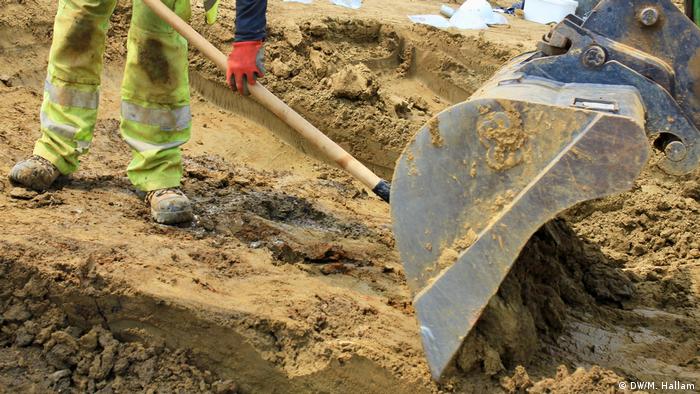 By the last week of the dig, large excavators were used more liberally to hurry the process along

Academic specialists in need or desire of field experience were also invited to volunteer their services, with the promise of help to cover their expenses if there was enough money left over.

Ben Goodburn bought into the project not once, but twice.

"I started off as a [financial] supporter," he tells DW, all while delicately brushing debris from a skeleton with largely undamaged legs and a devastated torso. "But then, given my background in archaeology, I decided to come myself."

Excavating 20th-century history is not that common in archaeology, given the extensive written and photographic evidence from the period.

"Some archaeologists don't really like the two World Wars," Goodburn said. "They're the destructive, recent, well-known conflicts that destroyed the Roman treasures and mysteries beneath. But it feels like archaeology to me."

'That's going to take a while'

It feels like archaeology to an amateur observer, too. But a pall hangs over the site that one imagines is not so present somewhere like Pompeii, or a Mayan ruin. The history is modern, tangible, and steeped in death and destruction at every turn. A selection of fairly common bounty: part of a boot, a water bottle plus bullet hole, some ammo, and parts of shells

Signs of the conflict abound. Our tour guide Nathan Howarth found a bullet beneath his shoe at random within seconds of starting our tour, joking that we could take that one home, as they had plenty of ammo already. Howarth is a British soldier who took unpaid leave to take part in the project — though the military will pay him for documenting the experience for the regiments that served in Wijtschate.

A white tent offering shade on a hot summer day becomes less inviting after Howarth pointed out it was shielding workers digging their way through a pair of German mass graves. "People don't always enjoy staying too long in this tent," he said.

Another Italian member of the team displays some signs of battle-weariness on a blistering July day after three months on site. Just before lunch break, a colleague entered the break room and kitchen, gently telling her: "I'm sorry! I've got a British soldier and his rifle, lots of effects, and some buttons."

Her face sinks: "That's going to take a while."

'I've got to go and look at that sandbag'

The site is remarkably advanced, with thorough German fortifications. The team even found remnants of an electric cable in the trenches, theorizing that it powered a signal lamp pointing across the valley and beyond Ypres.

Doyle bounds around the dig with his camera, studying the trench network. Ledges are cut either side of the trenches, a few inches off the ground. Below them is a base level of timber and bricks. But these are not for walking on: they're a desperate bid to improve drainage. The ledges would have served as the troops' dry footholds. The low-lying Flanders region's irrigation system was built up over centuries and then obliterated within weeks by artillery barrages, leading to the muck and the mire that became synonymous with the Western Front. Doyle unpacks this at length and in real time for his followers online.

Doyle told DW that the team came to the Wijtschate site with an excellent idea of what they were looking for and where, mainly thanks to period photos. "After all, the reason the Red Baron is in the skies at this point is to shoot down all those reconnaissance planes."

When a largely undamaged sandbag (not a kind of material that tends to fare well underground amid mud and water) is discovered, Doyle politely begs his leave, saying "I'm just going to go and look at those sandbags, because they are fascinating." 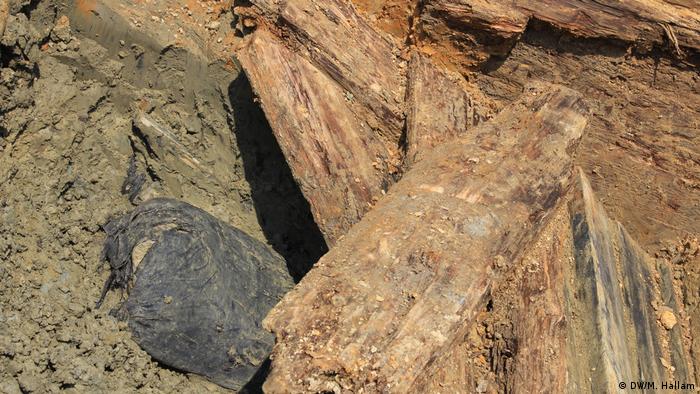 The very sandbag in question...

The excavators have to take care with the human remains. They asked us not to take any photos for sensitivity's sake; and even when they think they've identified a soldier — perhaps by the buttons from his uniform, or the language of his Bible, or the type of ammunition or weapons on his person — it's usually up to national governments or the military to decide whether to accept the remains as "one of theirs."

Howarth turns somber when taking visitors to a back room for a closer look at the unblemished skull (and perfect teeth) of a deceased soldier believed to have been French. "I'm a soldier. People should see these things, I think. It's why we're here." He's a relatively old casualty by the site's standards, thought to be in his early 20s.

Doyle and head archaeologist Simon Verdegem both alluded to some public resistance as the Dig Hill 80 team sought to foster support. "Some people did say 'Why don't you let them rest?'" Verdegem said.

But for Doyle and the rest of the team, the more than 130 fallen soldiers would have found little rest as part of the foundations of a new housing estate. Instead, the remains found at the Wijtschate during the Dig Hill 80 operation will receive proper burials.

"This isn't vanity, it's a rescue," Doyle said.

Wijtschate's full, four-year wartime story, alas, is far too long to be told here. But here are just a few of the noteworthy points:

Almost 30 sites are on the shortlist to receive the highly coveted World Heritage designation. France and Belgium have entered their World War I graveyards into the running. The final decision will be announced in July. (24.06.2018)

The villages and hills around Ypres in Belgium were some of the fiercest-fought regions in World War I. One of them, Wijtschate or "Hill 80," has just been excavated thanks to more than €200,000 in crowdfunded donations. (13.07.2018)