Captain Hans Langsdorff rescued his crew of more than 1,000 men by scuttling his ship, the Graf Spee, rather than fight a hopeless battle in 1939. His daughter says it’s time to honor his moral courage. 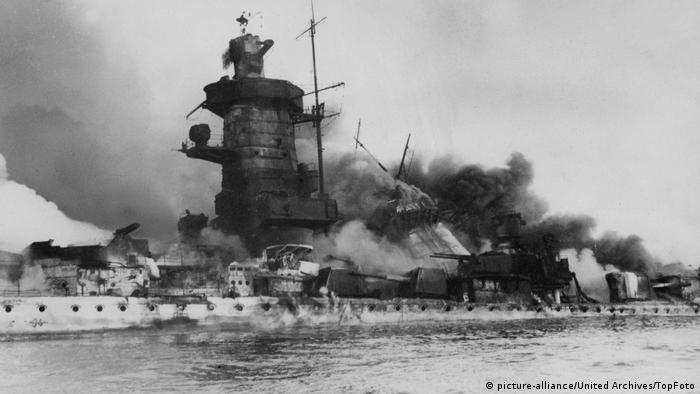 On Dec.17, 1939,  the battle-damaged German warship Admiral Graf Spee (pictured above) limped out of the port of Montevideo into the estuary of the River Plate for what was expected to be a decisive clash with Britain's Royal Navy.

But suddenly, to the amazement of the thousands of spectators watching from the roofs and seafront of the Uruguayan capital, she was rocked by a series of explosions. Jets of flame burst from her and a plume of smoke billowed into the reddening evening sky.

The proud ship, which had only four days earlier damaged three British warships in the first sea battle of World War II before steaming to neutral Montevideo for repairs, had scuttled herself in shallow waters. Her wreck burned for three days. 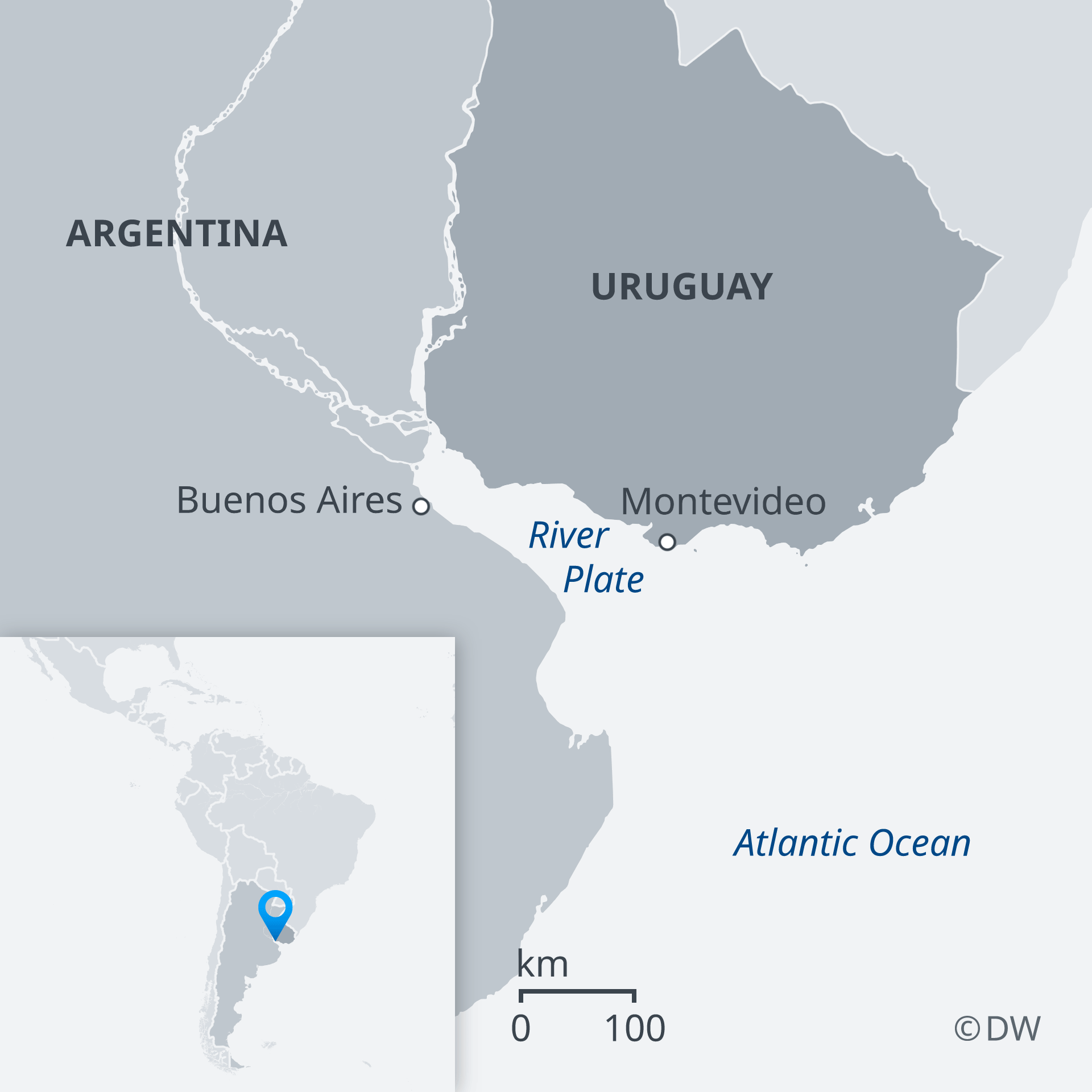 Her commander, Captain Hans Langsdorff, believed he was facing impossible odds against a superior force beyond the horizon and defied Hitler's order to fight to the last man. Three days later, he committed suicide, shooting himself in the head in a Buenos Aires hotel room. He was lying on Graf Spee's battle ensign.

Eighty years on, his daughter, Inge Nedden, 82, is calling on Germany to show greater public recognition of his act that saved a crew of more than 1,000 men from almost certain death. They were interned in Argentina during the war and many settled there afterwards.

Every year, hundreds of their descendants gather at his grave in Argentina's National Cemetery in Buenos Aires to commemorate him.

"The affection, gratitude and unwavering trust of many former Spee soldiers in many encounters over the years have made me proud and defined my joy at the rescue of the many men by my father," Nedden said. "So I hope one will find a way for him to be honored publicly as well."

Feted abroad, Langsdorff is largely ignored in Germany even though he would appear to embody the modern army's stated ethos of encouraging personal responsibility and rejecting the blind obedience of the Nazi era.

The Canadian town of Ajax in 2007 dedicated a street to him — "Langsdorff Drive" — and the Royal Navy, which was also spared casualties by his actions, will honor him in a memorial dinner at its base in Portsmouth in December.

In Germany though, no streets or squares are named after him and there has been no official military representation at the annual ceremonies at his grave.

The German War Graves Commission has not responded to a request from the family that it begin tending his grave, Nedden and her husband Rüdiger said in an emailed statement.

But as the 80th anniversary of the drama approaches, politicians and Hans-Jürgen Kaack, the author of a new biography of Langsdorff due to be published this month, are supporting the Neddens' call for greater recognition of his actions. 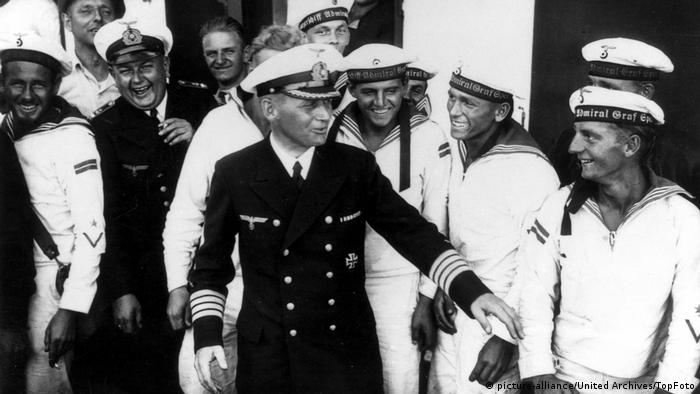 "I want his behavior to be honored, it is an extraordinary feat as a soldier to forego a battle in order to save 1,200 lives," Kaack, a retired naval officer, said.

He said a conservative mindset remained entrenched in the German navy, and that he had received angry letters from several former naval officers in recent weeks.

"People are annoyed with me for addressing something that hasn't been addressed in 80 years. For the navy, the duty to fight continues to prevail and I have the impression that only a small number of officers have a sense that there can and must also be an ethical judgment of such an approach."

Jan Korte, a lawmaker from the opposition Left Party, has urged Defense Minister Annegret Kramp-Karrenbauer to declare her position on Langsdorff.

He said it was a contradiction that Germany shuns him while commemorating Rear Admiral Rolf Johannesson, who signed five death sentences against resistance members two weeks before the end of the war, with a bust that stands in the navy's college at Mürwik.

"It is telling that people like Langsdorff, who early on rejected the madness of fighting to the end and saved many people with their actions, are seen as a red rag and others who represent the murderous tradition of the navy continue to be honored," said Korte.

Praise but no action

The German Defense Ministry, contacted by DW, heaped praise on Langsdorff and denied that the military does not honor him — but it stopped short of pledging a more public form of recognition.

A spokesman said Langsdorff had saved many lives and prevented the ship's modern and secret technology from falling into the hands of the British.

"In this respect, it is a historical example of timeless soldierly virtues," the spokesman said. "These are recognized in the Bundeswehr and his example is used at the naval school in Mürwik, in teaching and training, to support the young officer candidates in their personal confrontation with the political, legal and ethical dimensions of the military and naval service."

Kaack said Langsdorff had been given command of the fast, heavily gunned and well-armored Graf Spee because he regularly topped the navy's skill rankings.

He had won the Iron Cross in WW I when his duties included commanding minesweepers in the North Sea.

After the outbreak of WW II, the Graf Spee was ordered to disrupt British commerce and sank nine merchant ships in the South Atlantic and Indian Ocean. Langsdorff won respect from British crews for his humane treatment of prisoners.

After being tracked down and engaged by the Royal Navy cruisers Exeter and Ajax and New Zealand's Achilles in the battle of the River Plate on December 13, Langsdorff made for Montevideo where the authorities only permitted him 72 hours for repairs before the ship would be interned under international rules governing neutrality.

The repairs would have taken at least two weeks, and British intelligence dispatched fake signals to mislead the Germans into believing that fresh Royal Navy warships were closing in even though the nearest ships capable of matching Graf Spee's firepower were still thousands of miles away.

Kaack said scuttling the ship made military sense because its ammunition was too low for a prolonged battle and it was too damaged for the 11,500 kilometer (7,145 miles) return to Germany. 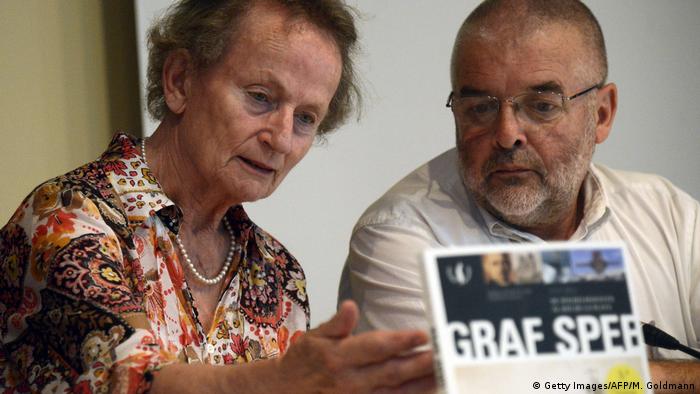 Inge and Rüdiger Nedden will travel to Montevideo and Buenos Aires in December to take part in 80th anniversary memorial events. They will be joined by a British delegation at a ceremony at Captain Langsdorff's grave together with families who, without his actions, would not have existed.

Inge, who was only two when her father died and has no memory of him, said she treasured her mother's reminiscences of him.

"They had great love for each other and absolute trust. That enabled her to accept his decisions amid all the sorrow and in particular during our visit to Argentina in 1954 to feel great joy to see the young families (of the crewmen) and feel their affection."