Salvage Team Prepares to Raise WWII Ship | News and current affairs from Germany and around the world | DW | 04.02.2004

A German battleship that terrorized the South Atlantic during the early days of World War II is to begin its journey back to the surface from its resting place off the coast of Uruguay this week. 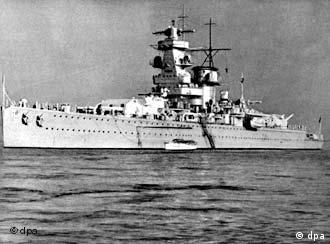 The Graf Spee claimed many "kills" before being crippled by allied ships and sunk by its own captain.

A multimillion euro effort to raise a German battleship that has lain at the bottom of the River Plate estuary in Uruguay since it sank during World War II will begin this week, weather conditions permitting.

Salvage work to exhume large segments of the Admiral Graf Spee from the silt in which it has resided for the best part of 60 years is expected to start either on Thursday or Friday. The start depends on the status of the high winds and choppy waters which are making preparations difficult on the broad waterway separating Uruguay from Argentina.

Crippled during Battle of the River Plate

Once a vessel feared by the British navy, the Graf Spee was regarded as a symbol of German naval might early in the war, as it prowled the South Atlantic chasing and sinking as many as nine allied merchant ships while always allowing the crews time to evacuate the ships. It was crippled by British warships on December 13, 1939, in one of the fiercest opening naval exchanges of World War II.

The pocket battleship -- smaller, lighter versions of conventional warships which were designed to outrun battleships and outgun heavy cruisers -- limped into Montevideo harbor after it had received several direct hits. It was pursued into the River Plate estuary by a British battle group consisting of the British light cruisers HMS Exeter and HMS Ajax, and the HMS Achilles of New Zealand.

Under the international conventions of the time, a damaged vessel had a total of 72 hours to make necessary repairs while sheltering in a neutral harbour. After being allowed to bury their dead, the crew of the Graf Spee was unable to salvage the battleship in the time allowed and, under intense pressure from Britain, neutral Uruguay forced the Graf Spee to set out to sea once more.

Ship’s Captain Hans Langsdorff decided that, instead of facing capture or destruction at the hands of the allied battle group, he would take the ship and sink it. Evacuating his crew onto ships bound for Argentina, Langsdorff scuttled the Graf Spee in waters less than 25 feet deep on December 17th before rejoining his shipmates in Buenos Aires. Langsdorff committed suicide two days later.

Very few of the battleship’s crew are still alive and only octogenarians in the Uruguayan capital of Montevideo can recall the memory of seeing the Battle of the River Plate unfold just seven kilometers off their sleepy shores. But the battle and the story of the Graf Spee is well documented, as much for the demise of such a revolutionary and innovative vessel as the ferocity of the conflict.

A historical example of naval innovation

"It was a masterpiece in its time," said Mensun Bound, a marine archaeologist from Oxford University who is co-ordinating the project with Uruguayan salvage expert Hector Bado, in an interview with Argentine newspaper, Clarin. “And it doesn't have a dark history. Its captain was a man of great dignity and honour. It was a battle in which both sides came out with their honour intact.”

After the partners discovered that the wreck was in better shape than first thought back in 1997, plans were drawn up to raise the ship a bit at a time. Bado said the recovery team would first try to remove a 27-ton communications tower equipped with early radar and what was then sophisticated sighting equipment for its 11-inch guns.

“The radar was one of the first to be used in that era,” said Bado, whose group has private funding and Uruguayan government backing for the operation which could take years.

“(The Graf Spee) will be rebuilt on land and will be the best ship museum in the world," said Bado. "This is the last salvageable German battleship."