Germany′s navy marks 100 years since scuttling at Scapa Flow | Germany| News and in-depth reporting from Berlin and beyond | DW | 21.06.2019

The sinking of Germany's captive Imperial Navy off a Scottish island in 1919 signaled the death of the Kaiser's Reich. The event is being commemorated by the German navy on its 100th anniversary. 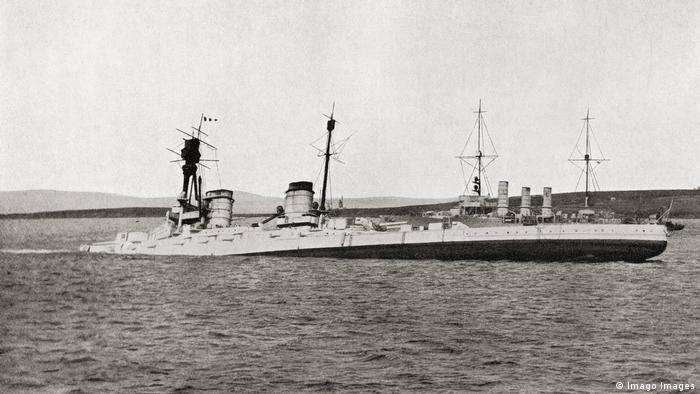 German navy divers will on Friday lay underwater wreaths at the remaining shipwrecks lying in the bay off a Scottish island to commemorate the 100th anniversary of what could be seen as some of the final casualties of World War I.

Seven months after the Armistice was signed in November 1918, nine German sailors lost their lives on June 21, 1919, trying to defend the pride of the last vestige of the German Empire: the High Seas Fleet.

To the defeated officers, the scuttling at Scapa Flow was, as German military historian Michael Epkenhans told DW, "a kind of belated victory."

"They had failed to beat the British on the high seas, but thus they made sure that the British and their allies wouldn't get the High Seas fleet," he said, speaking from the Orkney Islands. "It was better than nothing, and, when they came home, they felt like victors, and were treated as heroes. And, if you look at the memoirs of some of the admirals, you can see they really rejoiced about [the scuttling]." 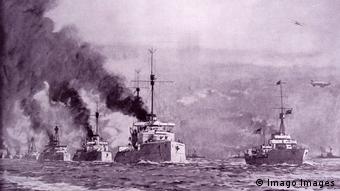 Following the end of World War I in November 1918, 74 German ships were interned in Scapa Flow, a shallow, sheltered bay in the Orkney Islands north of Scotland that had served as one of the Royal Navy's key bases during the war.

The story of their scuttling, which inspired plays and films in the 1920s, was dramatic enough: Skeleton crews, disaffected and sick after months on board, had surreptitiously loosened portholes, drilled holes in bulkheads and left watertight doors open, waiting on the order from their commander, Admiral Ludwig von Reuter, aboard the fleet's flagship, the Emden.

Von Reuter, in turn, was waiting for the outcome of the peace talks in Paris, where the fate of Germany's ships was to be decided. Historians believe that von Reuter had been ordered to sink the ships at all costs (a violation of the Armistice agreement), but only if, as was expected, the Allies decided that they were to be seized. France, in particular, was said to be keen to acquire extra ships.

The British Navy suspected that the Germans were planning to sink the ships and prepared plans to stop them, but von Reuter found an opportunity in an alignment of circumstances: a delay to the signing of the Treaty of Versailles, which the German admiral was not kept informed of, and a bright day on June 21 that allowed the Royal Navy to leave the bay to go out on exercises.

After von Reuter sent out a signal by semaphore and searchlights at around 11:20 a.m., sea cocks, flood valves and internal pipes were opened. It took an hour for the news to reach Admiral Sydney Fremantle of the Royal Navy, leading the exercises, and another two for his fleet to return to Scapa Flow, by which time crews were only able to save 22 of the ships.

"During the scuttling, some of the Germans were shot for refusing to go back to their ships to stop them from sinking," said Kevin Heath, one of the organizers of the commemoration projects, who has helped survey the salvage sites of the seven shipwrecks still at the bottom of the bay. "And 21 were wounded, mostly from bayonet wounds and being hit with rifle butts." 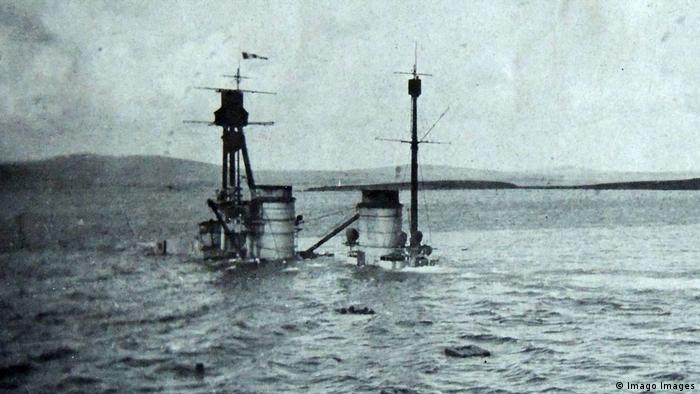 Thirteen World War I German sailors are now buried in a cemetery on the Orkney Islands: Nine were shot, and the others died during their internment — most probably victims of the flu.

The conditions during the internment were poor. Twenty-thousand Germans were initially brought to Scapa with the ships, though that was gradually reduced to about 1,800 by the time of the scuttling. "The British were very strict, and tried everything to avoid allowing the sailors to get into contact with the local population here," said Epkenhans. "Life was pretty harsh, especially in fall and winter. The weather here is pretty rough."

Heath added, "They weren't allowed off the ships. Their supplies had to come from Germany. We wouldn't give them anything. So it would have been pretty grim for them."

That segregation was partly motivated by fears of a spreading flu epidemic on board — but the British may also have had another "contamination" in mind: the spread of communism across Europe. The previous year's revolution in Germany had been started by mutinous sailors, and the vestiges of the class resentment were still on board.

"There was still a lot of tensions between the officers and the rank and file," Epkenhans said. "Many of the red sailors made clear that they were revolutionaries, and they to some extent even showed they despised their officers — by stamping on the decks to make it impossible for von Reuter to sleep. He eventually had to change his flagship because he got no sleep."

Nowadays, the last remains of all this drama (many of the ships were later raised) lie 30 meters below the surface. Scapa Flow has become a popular diving spot, where amateur regularly come to take a closer at the Kaiser's old ships.

Rosa Luxemburg: Guiding light and controversial figure of the Left

Social democrat, Spartacist, communist and revolutionary: The politician Rosa Luxemburg was murdered 100 years ago. She remains as controversial as she is admired — and so does her contemporary, Karl Liebknecht. (15.01.2019)

World War I on the big screen