For the soldiers on the front lines, World War I introduced an unprecedented level of violence. But it was not the "the war to end all wars" — quite the contrary, writes guest author Jörn Leonhard. 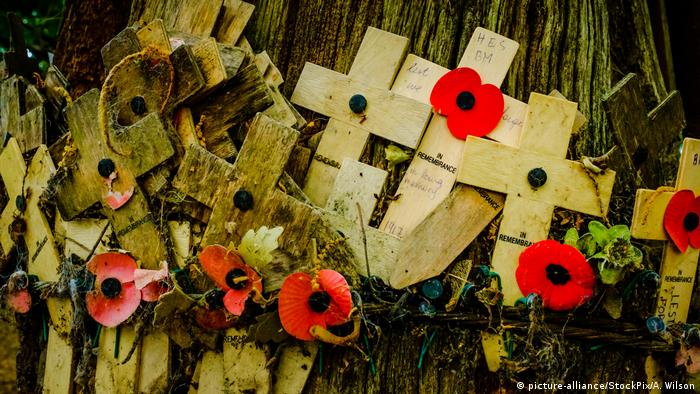 World War I ended on November 11, 1918, bringing peace to the West — but not to Eastern and Southeastern Europe. The Great War precipitated the collapse of the Austro-Hungarian Empire and gave rise to severe interethnic conflicts.

The historical significance of the Great War derives not only from the sheer number of war dead, but also from the new quality of violence it entailed. While most of those who died were soldiers — unlike in World War II — civilians were subjected to a new quality of violence, for instance in Belgium and northern France, in Serbia, Armenia, large parts of Eastern Europe, in Africa and Asia.

Many individuals were recruited as soldiers from colonies in India, Africa, East Asia and the Pacific, and perished far from home. Many soldiers were badly wounded in the fighting, obliging the state to provide long-term care for war invalids on their return home.

World War I, therefore, did not actually produce a victorious nation, or state, or empire. And neither did it put an end to global warfare. Only war itself emerged victorious, so to speak. And with it the totality of violence, which contradicted the maxim that had evolved during the fighting that this would be "the war to end all wars." Indeed, this belief had boosted the participants' determination to continue waging war. Ultimately, however, World War I did not have the outcome that many had hoped.

End of World War I and its aftermath

In the years immediately after Armistice Day 1918, war remained the norm rather than the exception. In Ireland and Poland, conflict broke out as new nation-states were established. In Russia, a bloody civil war ultimately saw the Bolsheviks triumph. In Turkey, violence was used as a way to forcefully undo the provisions of a peace treaty.

What began in the summer of 1914 as war between European states gradually grew into a multitude of other violent conflicts which continued long after World War I formally ended.

The first half of the 20th century was a period of violent catastrophes and turmoil, and it almost seems as if it took the remainder of the century just to heal these wounds. But the scars of war remain visible to this day.

The way World War I is recalled in Germany significantly differs to the culture of remembrance in the United Kingdom, France, and other countries that were involved. In Germany's national psyche, the horror of the Holocaust and World War II continue to overshadow the bloodshed of World War I. This is why for Germans World War I is not known as the Great War as it is in the UK, but merely the war that preceded World War II. For them, World War I appears almost as if it belongs to a time much further away.

Remembering the massive destruction and extreme violence of World War I, and reflecting on what harm humans can inflict on each other in modern warfare, must be part of our modern consciousness, to help us understand how we arrived in our complicated present times. It should not, therefore, be regarded as a distinct historical episode without any bearing on the here and now.

Jörn Leonhard is a professor of Western European modern and contemporary history at the University of Freiburg. He has published two seminal works on World War I: Die Büchse der Pandora — Geschichte des Ersten Weltkriegs (Pandora's Box: A History of the First World War) (2014) and Der überforderte Frieden - Versailles und die Welt 1918-1923 (An overwhelming peace — Versailles and the World 1918-1923 (2018).

Men's and women's teams from the British and German armies played a pair of commemorative friendlies in Nottingham, days before the centenary of the end of World War I. Even in the trenches, football never died. (08.11.2018)