Employees at a Hong Kong crisp factory got a nasty shock when they discovered a World War I-era grenade in a pile of potatoes imported from France. The mud-coated device was likely left in a trench 100 years ago. 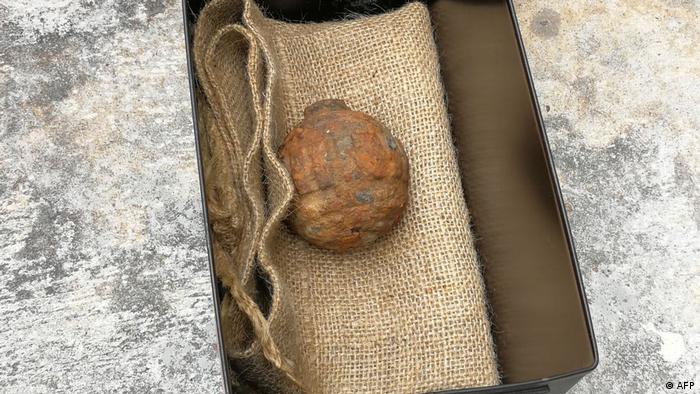 A police bomb squad was called to the Calbee snacks factory in eastern Hong Kong after staff there found a hand grenade from the First World War inside a crate of French potatoes, police said.

Officers moved cars and piled sandbags around the 1-kilogram (2.2-pound) device before safely destroying it.

"The grenade was in an unstable condition because it had been previously discharged but failed to detonate," superintendent Wilfred Wong Ho-hon told reporters.

Mistaken for a potato

The grenade, thought to be a German model, was encased in mud and hidden in a shipment of potatoes imported from France. Hong Kong University military historian Dave Macri said the weapon was probably buried beneath a former battlefield some 100 years ago.

"If it was covered in mud, the grenade was likely to have been left behind, dropped by soldiers there during the war, or left there after it was thrown," he told the South China Morning Post.

"The ditch was then filled up and used as a growing field, and the explosive was tossed into the mix of harvested potatoes ... and sent to Hong Kong."

The discovery of wartime bombs or grenades is not uncommon in Hong Kong. During World War II, the city saw fierce battles between Japanese and British forces and was heavily bombed by the US and its allies.

The woman thought the unexploded World War II shell she found could be taken home as a souvenir. She reportedly washed it in her hotel room to not get her clothes dirty, but wasn't worried about an explosion. (11.07.2018)