The woman thought the unexploded World War II shell she found could be taken home as a souvenir. She reportedly washed it in her hotel room to not get her clothes dirty, but wasn't worried about an explosion. 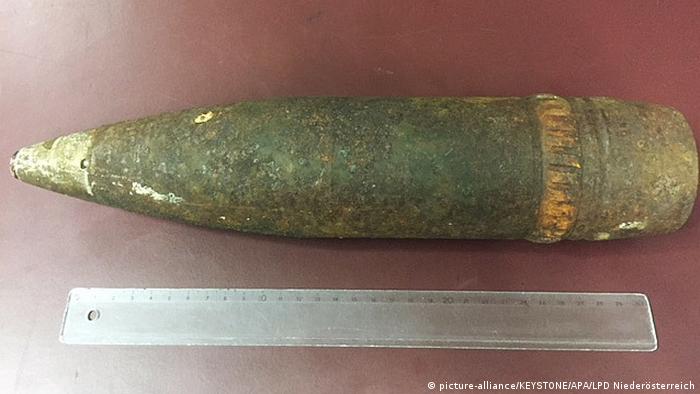 A 24-year-old American tourist caused panic at Vienna Airport when she put an unexploded World War II artillery shell in front of Austrian customs officials and asked whether the "souvenir" could be taken onboard her flight home.

Officials quickly called the bomb disposal unit to remove and dispose of the 7.5 caliber dud tank artillery shell.  The incident shut down the arrival and luggage hall for 15 minutes.

Police said at no time were passengers under threat.

The woman had found the World War II relic while hiking.

According to the Kronenzeitung newspaper, the woman reportedly cleaned the artillery shell in her hotel room so as not to get her clothes dirty when she packed it up to take to the airport.

An 800-meter area will be evacuated on Friday morning to allow authorities to defuse a 500-kilogram World War II bomb. Police said there was no immediate danger from the unexploded device. (18.04.2018)

An aerial World War II bomb partially exploded during an attempt to defuse it in the eastern city of Dresden. Bomb disposals are routine in Germany and rarely involve accidents. (24.05.2018)

Authorities in the eastern Italian town of Fano ordered some 23,000 people to evacuate after the discovery of a bomb from World War II. Officials said the device was neutralized at sea in a "highly risky operation." (14.03.2018)

A lot of unexploded bombs are buried in German cities, decades after WWII. And they're getting more dangerous - not less - over time. The hope is that lasers and 3D modeling will avoid another 'Munich 2012' scenario. (20.04.2018)

Ski season is on again in Germany and Austria, with restrictions 12.11.2021