An 800-meter area will be evacuated on Friday morning to allow authorities to defuse a 500-kilogram World War II bomb. Police said there was no immediate danger from the unexploded device. 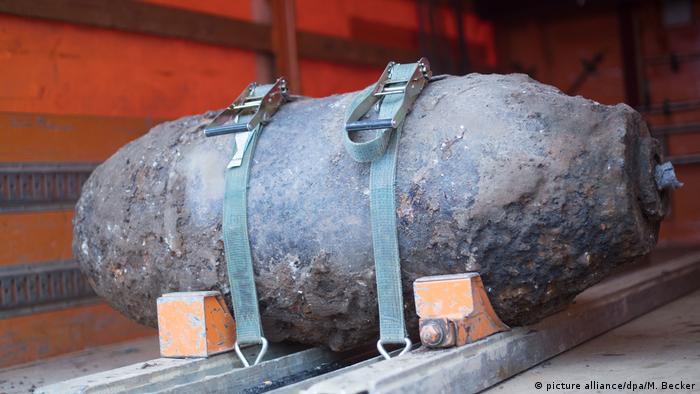 An aerial bomb discovered near a Cologne train station in 2016

German police said an area close to Berlin's central train station would be evacuated on Friday to allow a 500-kilogram (1,102-pound) World War II bomb found during construction work on Wednesday to be defused.

Police wrote on Twitter that the bomb was in a safe condition and there was no immediate danger, but all buildings within 800 meters of the site had to be evacuated from 9 a.m. (1100 UTC) on Friday as a precaution.

The bomb was discovered during construction work on Heidestrasse in Mitte. Even 70 years after the end of World War II, it is still not uncommon for unexploded bombs to be in this way in Germany.

The central station is near the evacuation area, according to the Berliner Morgenpost, and is a major stop for long-distance trains.

It was not clear on Wednesday how severely the evacuation would affect transport, but police asked that commuters follow official instructions on the day.

A Deutsche Bahn spokesperson said they were preparing for interruptions to traffic.

London City Airport has been closed following the discovery of an unexploded World War II bomb in the nearby River Thames. Police are enforcing an exclusion zone while the find is "safely dealt with." (12.02.2018)

Police have evacuated some 97 inmates from a Regensburg prison after an unexploded bomb from World War II was discovered nearby. Some 1,500 local residents were also ordered to leave so the bomb could be defused. (01.07.2017)

Experts have defused a World War II bomb in Frankfurt after the largest evacuation in Germany since 1945. More than 60,000 people had to leave their homes as the device was made safe. (03.09.2017)