Dresden 1945 — The devastation of war

Dresden thought it was safe, protected by its architectural beauty. But 73 years ago, the city paid an enormous price for Hitler's war, suffering bombing attacks of a ferocity unparalleled in Germany. 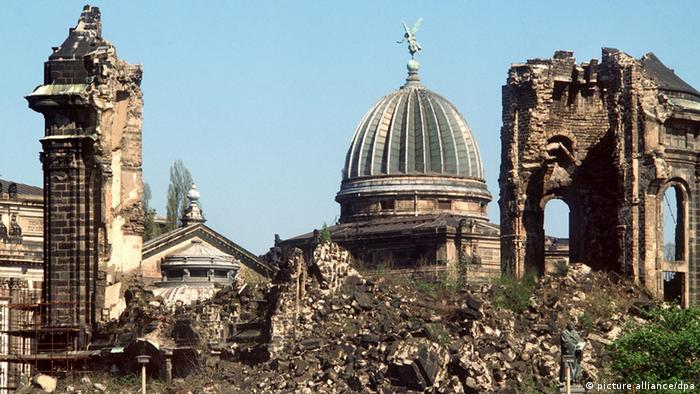 In 2004, the city council of the eastern German city of Dresden set up an interdisciplinary commission to investigate the question: How many people lost their lives in the bombing raids of February 13-15, 1945?

For decades, there has been wild speculation. 70,000 is often cited. 35,000 seems a more likely estimate — but just an estimate all the same. The Dresden commission came to a definite conclusion, calculating that 25,000 people were actually killed by the bombings. It produced evidence backing up this number in its final report released in 2010.

It is much easier to document exactly what happened over Dresden 70 years ago. On February 13, 1945, 245 four-engined Lancaster bombers from the No. 5 Group of the Royal Air Force (RAF) took off from England. Their target: Dresden on the Elbe River, a city that at the time had a population of 630,000, with an estimated 100,000 refugees. To a large extent, Dresden was strategically and economically unimportant for the further course of the war in Europe, which had already been decided by 1944. 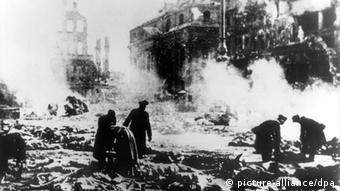 At 8:39 p.m., the sirens in the city began to wail. In the space of just 23 minutes, some 3,000 high-explosive bombs and 400,000 incendiary bombs rained down on the "Florence of the Elbe," as Dresden was known because of its beautiful architecture and wealth of art treasures. The city center was vaporized. The glow of the fires was so intense that British pilots headed for Dresden reported being able to see the city burn from 320 kilometers (200 miles) away and from an altitude of 22,000 feet (6,700 meters). The temperatures were so high that glass melted in cellars. Some 15 square kilometers (5.8 square miles) of the city were razed to the ground in two British attacks and a subsequent raid by US bombers.

Hundreds of British and American pilots were involved in Dresden's annihilation, but one person was in charge: Arthur Harris, Marshal of the British Royal Air Force. He was Churchill's right-hand man for the area-bombing attacks on Nazi Germany, a military method of demoralizing the enemy. 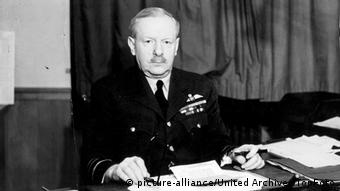 'Bomber Harris' in the British press, 'Butcher Harris' to some contemporaries in the RAF

"No hobbies. Never read a book. Didn't like music. Lived for his job:" That is a short summary of the character of this top military figure, who remains controversial to this day. Harris was a kind of "anti-Englishman" — he totally lacked the proverbial British politeness, being coarse and sometimes even insulting. Broadly nicknamed "Bomber Harris," some within the RAF at the time called him simply "Butcher Harris."

Harris already discovered his passion for aerial warfare between the world wars. He was a wing commander in Pakistan and Iraq, often flying himself. He liked using incendiary bombs against Kurds and Arabs, whose straw-roofed huts easily burst into flame, and was enthusiastic about the effectiveness of war conducted from the air.

Like many air force officers both in Britain and elsewhere, Harris believed in the military superiority of bombers. As far back as 1943, he promised to bomb Germany into surrender just from the air, without using any ground troops. A year later, in 1944, Harris took stock: 45 of the 60 most important German cities had been destroyed, including Cologne and Hamburg. He called for the rest to be finished off as well. That included Dresden. 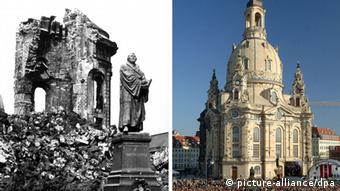 Some historians see the bombing of Dresden as part of an increased military cooperation between the Western powers and the Soviet Union in the last phase of the war. The Allied offensive against Germany on the Western Front had become bogged down since the end of 1944, while the Red Army was advancing in the east with increasing speed.

In January, shortly before the Yalta Conference, Churchill thus began looking into whether "Berlin and no doubt other large cities in East Germany should not now be considered especially attractive targets." The purpose of all this was to impress Moscow. For Stalin was distrustful, having called on the Western powers to open a second front for years.

Another theory runs like this: Because central Germany had been promised to the Soviets as an occupied zone even before the Yalta Conference, the British and Americans unleashed a blind destructive fury in Dresden and other eastern German cities.

Whatever was the case, Harris had his eye on Dresden. And there were warnings long before February 13. Allied radio reports and even newspapers described the possible scenario that every German city could become a front city as the war continued. In addition, Dresden was a junction for roads and train lines running both east to west and north to south. 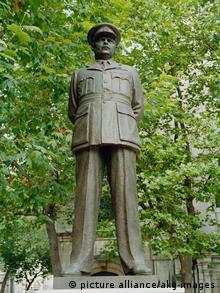 The Allies also saw Dresden as a likely place of refuge for Hitler and the Nazis if the transport hubs of Berlin and Leipzig were eliminated as supply routes. So the city was high on the Allies' list of potential targets.

And Churchill was obviously not just a passive onlooker with regard to the merciless bombing methods of his aerial strategist Harris. Shortly before his death, Harris wrote that the attack on Dresden "was at the time considered a military necessity by people more important than myself."

The deed and its perpetrator — still a controversy

The Red Army under Marshal Zhukov was just 80 kilometers to the east of Dresden when British and American bombers gave the Soviets this sign of cooperation against Hitler's Germany in February 1945. "The Soviet army would never have been capable of such a barbarity," Shukov said later.

And to this day, the bombing of Dresden is an emotive issue in England as well. When a 2.7-meter-high bronze statue was erected to "Bomber Harris" in the center of London in 1992, the Queen Mother praised him as an "inspiring leader" while hundreds of demonstrators chanted "mass murderer, mass murderer."