Uruguayan officials are afraid neo-Nazis could get their hands on parts of a German World War II battleship being raised near Montevideo harbor. The "prize" piece is a 400-kilo (880-lb.) bronze eagle atop a swastika. 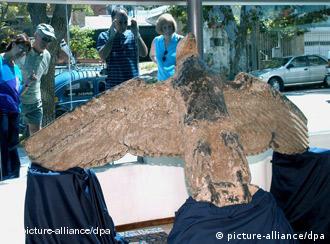 A private syndicate wants to put fragments of the "Graf Spee" battleship up for auction and share the proceeds with the government, as required by law, The New York Times reported. But Uruguayan officials are concerned that neo-Nazis could acquire the artifacts and have threatened to suspend the group's permit and do the salvaging themselves.

"There are ethical limits on the promotion of Nazi symbols in museums, so who are the potential buyers of these icons if not neo-Nazis," Miguel Esmoris, head of the government's National Heritage Commission, told the paper. "We're not against salvagers making a profit, but this is formally an archeological site, and we cannot allow illicit trafficking in cultural and historical items." 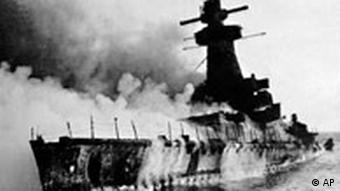 Graf Spee was crippled by British warships and sunk by its captain on Dec. 13, 1939

The group has been trying to salvage parts of the ship since 2004. That year they recovered a cannon and a communications tower, finds that failed to attract half as much attention as the bronze eagle and swastika that were brought to shore in February.

The Graf Spee was regarded as a symbol of German technological innovation at the beginning of World War II. It was crippled by British warships in 1939 in one of the first naval exchanges of the war. It was subsequently sunk by its captain outside of Montevideo harbor.

Alfredo Etchegaray, head of the syndicate, said collectors from the United States and Asia were willing to pay $15 million (12 million euro) if the fragments go to auction, according to the report. Marine archeologist Roberto Branco, who works in the region, told the paper he had received e-mail messages from colleagues in Europe who were keen on buying the eagle and swastika. 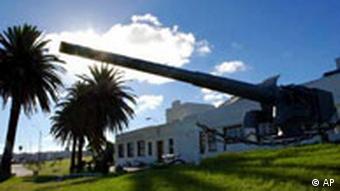 The salvaged cannon was installed at the Naval Museum in Montevideo

Etchegaray said that potential buyers would be carefully screened.

But Ernesto Kreimermann, president of the Uruguayan Jewish Committee, was critical of the idea of selling the fragments privately. "When it comes time to commercialize the insignia, we believe it must go in a museum, not into private hands, and that photographs be controlled," he told the paper.

Germany may also claim ownership of the wreck, further endangering the syndicate's project, which Etchegaray said had already cost it $100,000. A German Embassy official in Montevideo, Theodor Proffe, reportedly said his government had laid out its position in a note to the Uruguayan foreign ministry, but he refused to explain the official position. The previous German government had apparently protested against the Graf Spee being raised and declared the ship its own property. 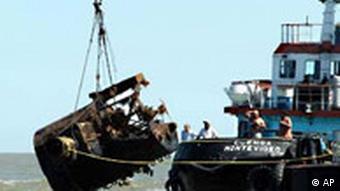 The communications tower was recovered in Feb. 2004

Etchegaray, meanwhile, disputed that Germany had any claim to the vessel, saying that it had sold the rights to salvage the ship to a Uruguayan businessman in 1940.

"We're interested in this as pure history, and not in taking one side or another," Etchegaray told The New York Times. "History is full of horrible crimes, which have to be handled maturely, seriously and respectfully."

A German battleship that terrorized the South Atlantic during the early days of World War II is to begin its journey back to the surface from its resting place off the coast of Uruguay this week. (Feb. 4, 2006)

German police is investigating the case of German-Turkish movie director Fatih Akin who was seen last week wearing a T-shirt with a swastika on it in protest to the policies of US President George W. Bush. (Aug. 7, 2006)

The use of swastikas is banned under German law. But they are a common element in symbols used by the left-wing movement. The Stuttgart district attorney now wants legal clarity on this contradiction. (April 4, 2006)