Stuttgart Seeks to Ban Anti-Fascist Symbols | Germany| News and in-depth reporting from Berlin and beyond | DW | 04.04.2006

The use of swastikas is banned under German law. But they are a common element in symbols used by the left-wing movement. The Stuttgart district attorney now wants legal clarity on this contradiction. 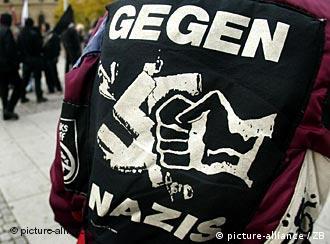 "Against Nazis" reads the patch on this left-wing supporter's jacket

A crossed-out swastika reminiscent of a no-parking sign or a little stick person throwing a swastika into a garbage can are images often used by the left-wing movement in Germany.

That's despite the fact that the swastika itself is banned as a symbol of an unconstitutional organization. German law allows its use, though, if it is clearly in a form indicating opposition to National Socialism.

The Stuttgart district attorney's office feels this regulation requires greater clarity. It has now filed charges against Nix Gut, a mail-order company which specializes in anti-fascist paraphernalia favored by punks and other supporters of the left-wing movement. The Winnenden-based company is accused of distributing merchandise with modified Nazi symbols.

"The disputed point is when is this type of symbol clearly recognizable as such," district attorney Tomke Beddies said.

She said that the justice system in Baden-Württemberg handled this problem differently, on a case by case basis. Stuttgart now wanted legal clarity, she said.

"We want consistency in order to settle this awkward situation," Beddies said.

Nix Gut welcomed the charges, as the case will finally clarify the legality of such merchandise incorporating swastikas, it said.

But Social Democrat Sebastian Edathy, head of the committee on internal affairs in the German parliament, said the district attorney's actions harmed the battle against right-wing extremism and neo-Nazism.

"The expression of a democratic attitude, worthy of support, is being criminalized," said Edathy. "This is a scandal in the administration of justice." 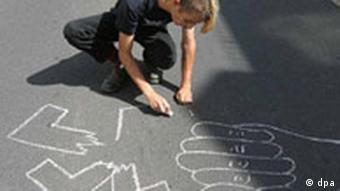 Punks often use broken swastikas to express their political beliefs

Beddies, however, maintains that if the law banning swastikas is not clearly implemented, neo-Nazis might eventually be able to make use of this and adapt the symbol to express their convictions.

"There's a danger that the use of swastikas, even in a modified manner, will not be removed from our society," said Beddies. "So neo-Nazis could use them for their own means and this should under no circumstances be the case."

"We want to avoid a situation where the use of these symbols once again becomes normal," Beddies said.

Wolfgang Kraushaar, a political scientist at the Hamburg Institute for Social Research, said that this process of normalization was widespread historically.

"It has been common for protest movements to use certain symbols to express their rejection of that symbol's association," said Kraushaar, whose research focuses on protest and opposition movements in Germany since 1949.

Is a crossed-out swastika a universal symbol?

Kraushaar said there have been repeated cases in Germany in which left-wing supporters have been criminalized for their actions aimed at protesting against neo-Nazis.

Last year, a student in Tübingen was fined for wearing an anti-Nazi button on his backpack. The local court had argued that a Japanese tourist would only see the swastika and wouldn't recognize the crossed-out symbol as an anti-fascist pictogram. The student has since won his appeal before the regional court, which ruled that he was clearly expressing his anti-fascist attitude by wearing the button.

According to Beddies, the Stuttgart district attorney also feared that a casual observer might misunderstand such symbols, and that this was another reason for the legal action. But Kraushaar said this form of pictogram was a practically universal symbol. 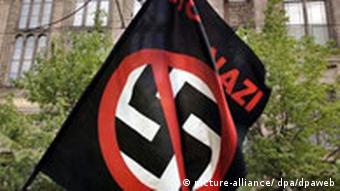 This symbol is universally understood as being against Nazis

"A Japanese tourist would understand its meaning just as well as a German," Kraushaar said. He said it was noticeable that the German justice system followed anti-Nazi supporters more closely than right-wing extremists.

"A backpack with a button is a bagatelle as opposed to a neo-Nazi rally," Kraushaar said.

The Stuttgart district attorney has filed the charges directly with the regional court. Nix Gut is expected to appeal the case if it loses. The ruling would then go straight to the Federal Court of Justice.

The anti-fascist movement has certainly gained some prominent political support in its fight to use the controversial symbol. In reaction to the case against Nix Gut, the head of the Green party, Claudia Roth, reported herself to the police for wearing a button featuring a crossed-out swastika.

Ernst Zündel, a Holocaust denier, faces a German court on charges of inciting racial hatred and defaming the dead. The case shows that while Germany guarantees freedom of expression, there are limits. (Feb. 20, 2006)

Giant Nazi swastika flags hung in the center of Berlin for the filming of Germany's first comedy about Adolf Hitler, made by a Jewish director. (Mar. 7, 2006)

In a conversation with DW-WORLD, Matthias Adrian discussed how skinheads are changing their image and how increasing numbers of youth, even those without far-right philosophies, are attending right-wing concerts. (Mar. 17, 2006)