Giant Nazi swastika flags hung in the center of Berlin for the filming of Germany's first comedy about Adolf Hitler, made by a Jewish director. 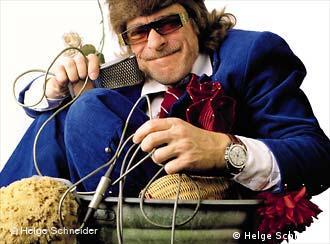 "My Führer -- The Really True Truth About Adolf Hitler" is billed as a parody of the hit German drama "Der Untergang" (Downfall) about the Nazi leader's last days, but this time featuring a sniveling Hitler wallowing in his defeats.

Its Swiss director, Dani Levy, 48, is an established filmmaker best known for the first German Jewish comedy since World War II, "Alles Auf Zucker" (Go for Zucker), which was a critical success in Germany and abroad in 2004.

A shaggy-haired comedian famous for his gag hit "Litter Box," Helge Schneider, has been enlisted to play the Führer in the film, whose release date had not yet been announced. 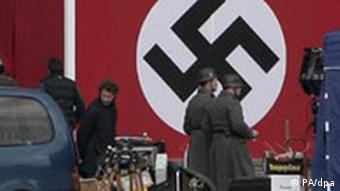 The film is Germany's first stab at a Hitler comedy

Some 700 extras joined the crew for the one-day shoot on Monday in front of the Hohenzollern Berlin Cathedral on the capital's Lustgarten lawn, which was festooned with mammoth red and white flags emblazoned with the black swastika, a spokeswoman for production company X-Filme told AFP. Filming on the picture began in January and is to wrap up in the coming weeks.

No fears voiced so far

The mass-selling daily Bild recently asked whether it was right to make a German comedy about the Nazi period, but the leader of the Central Council of Jews in Germany, Paul Spiegel, told the newspaper Monday he did not see a problem. "Both Helge Schneider and Dani Levy are certainly capable of bringing the necessary sensitivity to this project," he said. 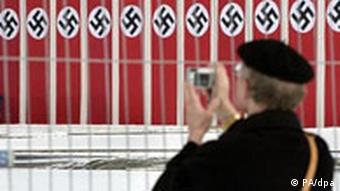 The Altes Museum was bedecked in swastikas Monday

Bild ran the article under a giant headline "Swastika Shock in Berlin."

The X-Filme spokeswoman said the company believed denizens of the German capital would not be offended. "It is obvious that when people learn that it is a feature film being made by Dani Levy they will not be shocked to see the flags," she said.

Nazi symbols are officially banned in Germany but may be used in specific educational and artistic contexts.

Breaking long-standing taboos, a comedy poking fun at Jewish life in Germany won the German Film Prize on Friday. The country's equivalent of the Oscars was for the first time awarded by a 600-member academy. (July 9, 2005)