Authorities have removed a new camp just a week after hundreds of migrants were left homeless in the French capital. Police used tear gas to drive the inhabitants out and decried an "illegal occupation of public space." 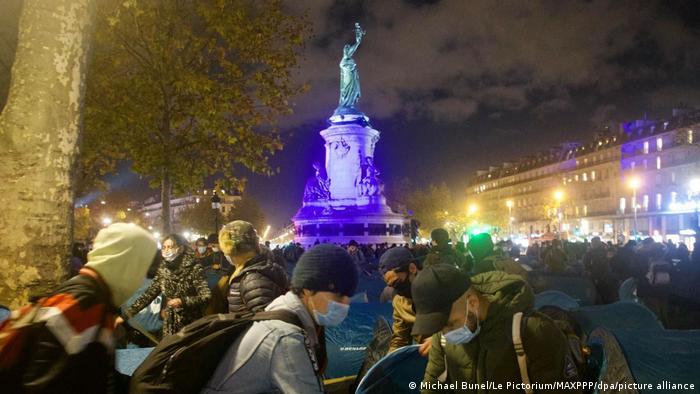 French police on Monday night cleared a makeshift migrant encampment in central Paris, which appeared after another was dismantled last week.

Police said that "certain associations" had organized the construction of the camp, which they said was "not acceptable."

The officers used tear gas to drive away the inhabitants and dismantle the camp in central Paris. Previously, volunteers had helped set up around 500 blue tents at the square on Monday, which were quickly filled by migrants, mostly from Afghanistan.

Around an hour alter, police arrived to take the camp apart, picking up tents – sometimes with people still inside.

Interior Minister Gerald Darmanin said on Twitter that the images of the operation were "shocking," and requested a "detailed report" on the events from the Police Prefecture by midday on Tuesday.

The refugee organization Utopia 56 said the migrants had become homeless after a camp near the Stade de France stadium was cleared last week. "We are surrounded by police officers who are chasing away the migrants and dismantling the tents as usual without having a solution for where they should stay."

Read more:Lesbos: Is another Moria in the making?

Police have cleared dozens of similar sites in recent years around Paris. Many migrants lack permanent or safe housing in France, even despite coronavirus fears and nationwide regulations implemented to curb the pandemic. Critics see the evictions as a symbolic political move that does little to address problems with migration policy.

Paris is a key stop-off point on the European migrant route, with tented camps often appearing around the city. Thousands have traveled from Paris to the port of Calais and attempted to hide in trucks moving across the English Channel.