Lesbos: Is another Moria in the making? 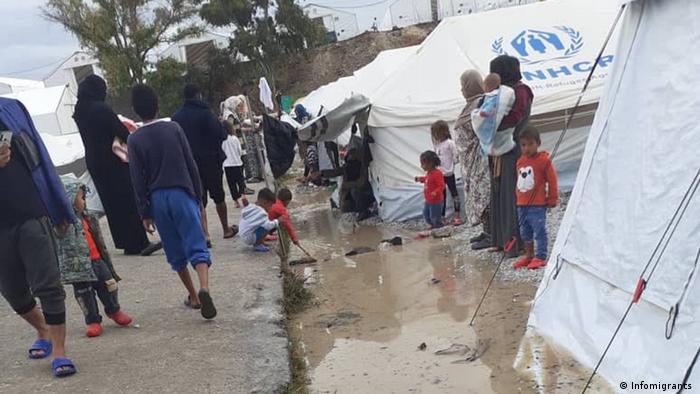 There are huge puddles in front of the tents at the Kara Tepe camp on the Greek island of Lesbos. A woman holding a newborn baby in a thick pink blanket watches children splash through the water, barefoot or in flip-flops. People are using shovels in often vain efforts to remove the murky water from inside the tents. The rainwater has even seeped underneath the plastic groundsheets, causing them to bulge in places.

The videos and photos circulating on Twitter and other internet platforms give the world an idea of how helpless the people on Lesbos must have felt after the massive rains this week. "The water came into our tent and everything was flooded," Ahmad Shuaib Abawi told DW. The 26-year-old Afghan and his family of nine live in one of the approximately 1,100 tents in what the Greek authorities refer to as a "temporary camp."

Conditions were supposed to be different there — more orderly, safer — after the controversial and completely overcrowded Moria refugee camp burned down about a month ago. 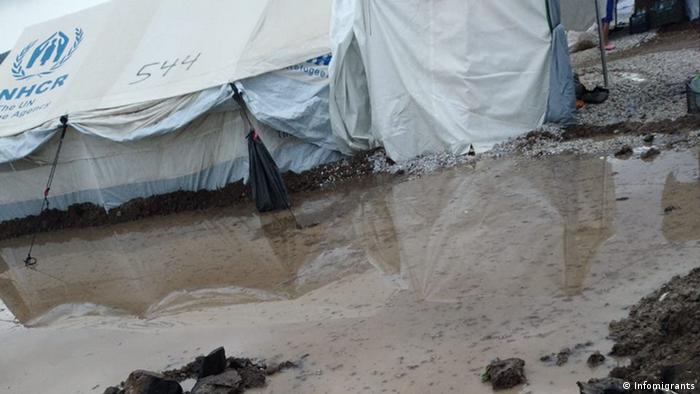 Parts of the camp are under water after the heavy rains

Even before the heavy rainfalls, critics called the new camp, which is being called Moria 2 by some, "inhumane." The rains have now destroyed about 80 of the 1,100 tents. According to the Greek Immigration Ministry, the authorities immediately started to fix the problem, arguing that it is normal for "temporary accommodation built within just a few days" to face challenges.

The ministry said only a small part of the camp was affected by the floods and that some of the refugees had been temporarily relocated. According to the Greek government, almost 10,000 people currently live at the Kara Tepe camp.

"It's really horrible," said Marion MacGregor, who has been on the ground in Lesbos for the InfoMigrants online portal for the past few days. The refugees are not doing well and the psychological strain, in particular, is enormous, she said. "They do not want to lose years of their lives waiting around in these conditions; they just want to have their asylum application interviews and get on with it" she said. Instead, many face a long wait in the camp, knowing that winter is coming, there are no showers and there is not enough food.

In good weather, the location of the camp could even be described as idyllic. It is situated right on the coast and the morning sun occasionally bathes the tents in soft orange light. But in reality, Kara Tepe has little of the idyll about it.

"People wash in the ocean," MacGregor said, adding that this is a problem in particular for the women, as they have no privacy. Portable toilets have been set up — altogether 345 of them, camp residents have told workers from the aid organization Doctors Without Borders (MSF). 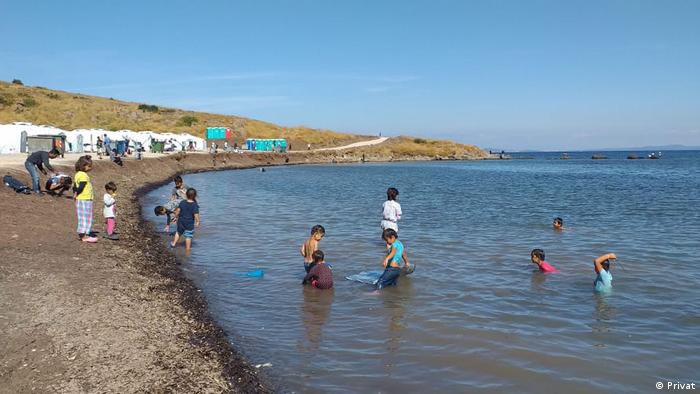 Food packages are not enough

"Once a day, they are handed a packet of food, but that's not enough," MacGregor said  — which is why some refugees try to sell bottles or handkerchiefs in the city to buy extra food. But thanks to solar panels, many people in the camp at least have electricity.

Is the situation in the new camp better than in Moria, despite the many privations? Residents of the camp are divided in their opinion. MacGregor has heard that there is less violence, at least, thanks to the enormous police presence in front of and inside the camp.

Ahmad Shuaib Abawi also had a relatively positive view — of the camp, at least. "We are not doing badly here, but we are wasting time; the children could go to school and we could study," he said, adding that he wants to get on with his life rather than get stuck. 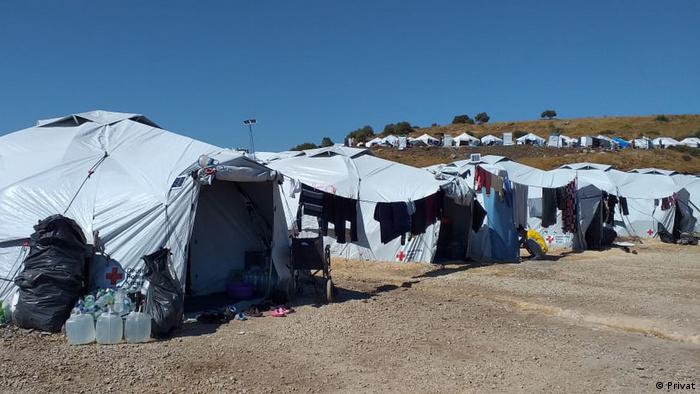 There are some 10,000 people living in the camp

"The conditions in the new camp remind us a lot of Moria, while we hear from our patients that in reality, the situation is even worse," said Marco Sandrone, director of operations for MSF on Lesbos, adding it appears that some tents have no groundsheet at all. "Before the rains, people slept on rocky or dusty ground, which has since become muddy," he said. Many families have to share tents; they cook, eat and sleep on about 7 square meters (75 square feet), he added.

The local aid organizations agree the living conditions are not humane despite promises by the Greek Immigration Ministry to provide "decent conditions," medical care and sufficient food. "Enough is enough!" several aid organizations, including MSF, say in a joint statement. "We reaffirm our call to move these people to safe and decent housing. Other European countries must also accept those seeking protection in order to relieve the situation on the Greek islands." 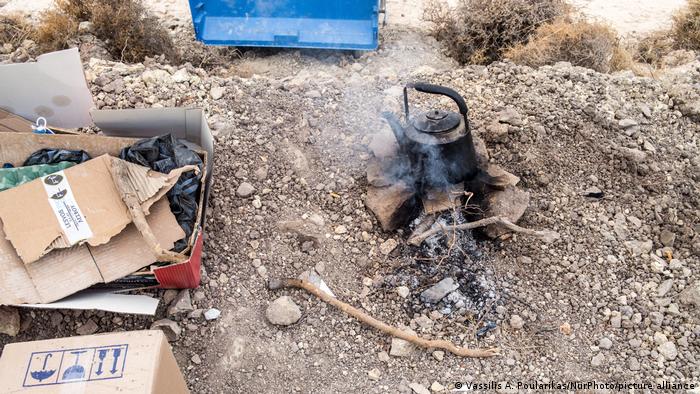 Residents of the camp are forced to improvise

About 2,500 refugees housed at the Kara Tepe camp have been transferred to other accommodation within the EU since September, and 1,300 are expected to leave the camp soon, according to the Greek Migration Ministry. Germany agreed to take in 1,500 refugees from Greece; France expects 900.

The aid organizations argue that is not enough. They call on EU leaders and member state to stop sealing off the Greek islands and reinforcing the bloc's external borders.  For the time being, however, nothing is likely to change at the Kara Tepe camp. The waiting continues, along with hopes that the next rain will not flood everything again.