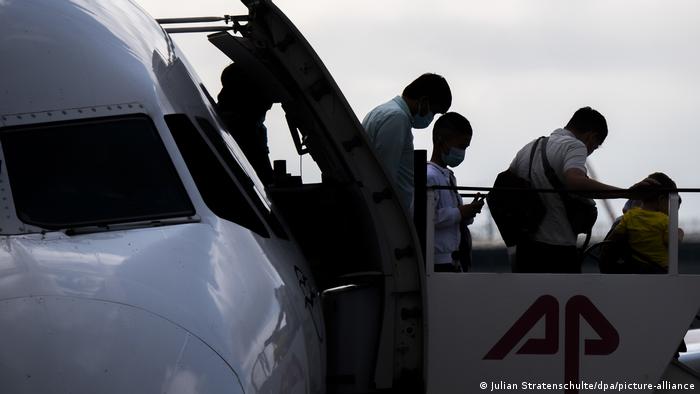 The first group of refugees from the razed Moria camp arrived in Germany from Greece on Wednesday.

A group of 139 people — unaccompanied children, children suffering from serious health problems and their immediate families — arrived in Hannover, in northern Germany.

At least 51 of the group came from the notorious Moria camp, with others coming from separate overcrowded island camps.

The German government agreed to take up to 150 children after the squalid camp was destroyed. It came as part of a European pledge to take in 400 children.

In addition, 17 sick children and their families were brought in under a commitment made before the Moria fire to take in 243 children who need medical treatment, the German Interior Ministry said. In 2020, a total of 713 people, including 104 unaccompanied minors and 142 children with health problems, have been flown from Greece to Germany, according to the Interior Ministry.

Not a long-term solution

German Chancellor Angela Merkel said taking in the children from the destroyed camp was an act of compassion but not a viable long-term solution.

"We saw terrible pictures in recent days ... from Lesbos, from a member state of the European Union. I believe it was right the way Germany acted there and provided humanitarian help, even though we know that it's not a sustainable solution to the problem,'' German Chancellor Angela Merkel told lawmakers Wednesday.

Merkel said she was "grateful" for a recent European Commission proposal to tackle "a really complicated problem that won't just occupy us for two, three years but, I predict, the entire coming decades."

"If we continue not to have a common basis among the member states of the European Union on the question of migration, then that will be a heavy burden for Europe's ability to act," she added.

Her message was backed up by Michael Roth (CDU), Minister of State at the Foreign Office, who appealed to European Union states to maintain an open mind towards reforming European asylum law.

"If we stop trying to find common and European solutions, nationalists and populists will have won in the end," Roth said in the general debate in the Bundestag. The nationalists were counting on deterrence, egoism and "retreat into the snail's shell," said Roth.

Roth said Germany's reunification 30 years ago gave the country a special obligation. "We are making a special effort for a united, cohesive and sovereign Europe."

At the same time, he emphasized: "We must ensure that Europe still plays a role in the competition with other value models. This will only succeed with united European forces.

The latest arrivals will be distributed among several German states, based on family ties and special medical needs.