Germany to take in some 1,500 migrants from Greece

Angela Merkel's government has said Germany will take in additional migrants from Greece and in particular Lesbos. More than 12,000 people were left homeless by fires at the refugee camp Moria. 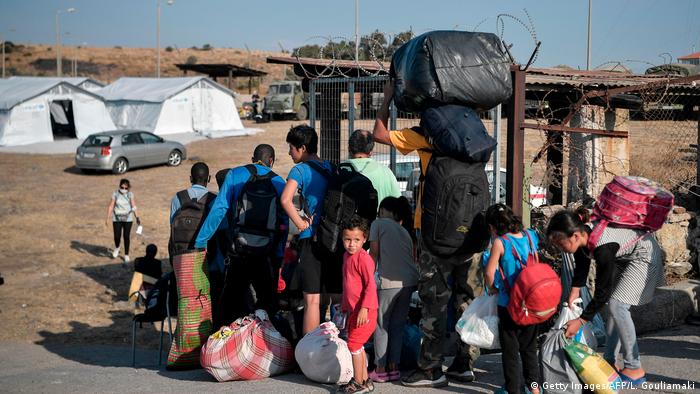 Germany said on Tuesday it plans to take in 1,553 asylum seekers from Greek islands following mounting criticism at home that it was doing too little in the wake of a devastating fire at a refugee camp in Moria.

The migrants are from 408 families with children that have successfully filed for asylum, government spokesman Steffen Seibert said. He added that the German government was working toward "a far-reaching European solution with receptive member states" to seek to redistribute more people.

Finance Minister Olaf Scholz was the first government minister to formally announce the decision, in a tweet.

"Germany will, in a further step, now take in more than 1,500 refugees, mainly families with children, who are currently in Greece. And we are striving for a European aid effort, under the terms of which our country would take in more people in need of protection," Scholz said.

The announcement came after Chancellor Angela Merkel and Interior Minister Horst Seehofer agreed that Germany would accept additional refugees being held on Greek islands. The government had already agreed to accept around 150 unaccompanied minors.

The decision to bring more migrants to Germany follows mounting public pressure for greater German action after a fire at the Moria refugee camp on the Greek island of Lesbos left around 12,000 people without shelter last week. Katrin Göring-Eckardt, a leading Greens politician, had called for Germany to take in 5,000 people.

"Every child who escapes the disastrous situation counts," Göring-Eckardt wrote on Twitter after the government's announcement. "Taking in 1,500 people from ALL Greek islands is another alibi-offer. Four thousand are living on Lesbos alone, according to the UNHCR (the UN's refugee agency). Do we leave them in need?"

Her colleague Omid Nouripour told DW that while he was "grateful for every person taken in," such small steps should not be used as an "indulgence," a reference to the Catholic practice of allowing reduced punishment for a sin in exchange for an action or financial contribution.

In an initial response, Germany had said it would take in between 100 and 150 unaccompanied minors as part of a joint European initiative.

The newest plan will also include migrants being held in other parts of Greece, not just those coming from Lesbos and Moria, government sources said, adding that this was a key point for the Greek government. They will hail from five islands in total.

Politicians from Germany's ruling coalition government had aimed to reach an agreement by Wednesday on how many people they would take in addition to the unaccompanied minors.

Oppostion parties like the Greens have dubbed the measures unsatisfactory, calling for a larger intake in the region of 5,000 people.

On Monday, the chancellor had emphasized that the agreement should address more than just the number of migrants Germany would accept. The deal should include a plan for establishing facilities to receive migrants and refugees on Lesbos, with Europe overseeing the financing and management.