After Moria, EU to try closed asylum camps on Greek islands | Europe | News and current affairs from around the continent | DW | 23.09.2020 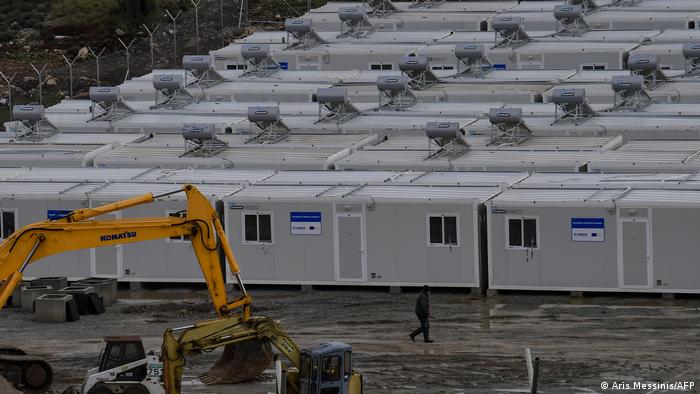 The site of what is to be one of the first new EU camps for displaced people is surrounded by a 6-meter (20-foot) barbed-wire fence. The heat of the day gathers in the valley, which is served so far only by a gravel road. The location of the future camp is over 5 kilometers (4 miles) from Samos, the main town on the island of the same name. When the camp is built, residents will be able to enter it through turnstiles at the gates by means of microchipped armbands. At night, the gates will remain locked.

By the end of 2020, Samos is meant to be the first Greek island to host a "closed camp." The announcement was made by the Greek migration minister, Notis Mitarachi, when he visited the island at the end of August. The European Commission has given Greece almost €130 million ($152 million) to build multipurpose reception-and-identification centers, which are meant to provide a higher standard of accommodation than previous camps had, with portable cabins, running water, separated areas and, above all, more security.

The concept of the closed camps is part of a new strategy to better fortify regions at the European Union's external borders. Overfilled camps in such regions have become a chronic problem since large numbers of displaced people began arriving in Europe from 2015 on. At the start of the year, the Greek islands near the border to Turkey were hosting more than 40,000 asylum applicants. In the town of Samos, the number of asylum applicants exceeded the number of people who lived there permanently.  Almost 5,000 people are currently living in the existing camp on the island — although it was first meant to house only 650.

Read more: Erdogan warns that 'millions' of refugees are heading to Europe

Residents have built tents made from sleeping bags, sticks and tarpaulins. Water pipes stick out from the ground. The doors of the portable toilet cabins are banging open and shut with the wind. There is a smell of fried fish and urine.

Omar, who asked that his real name not be used, was sitting on a pallet, drinking tea with his wife and children near the tent that the family — eight members in all — shares. At night, the rats are so loud that they can't sleep, the 58-year-old Omar said. After seven months of waiting since the family came from Idlib, Syria, he has had enough. "It's better to send us back to our country," he said: It would be better to be in danger in a civil war than to be provided indefinite refuge at this camp.

Read more: The helpless hand of humanity after Moria fire

Skin infections are proliferating, Omar said, and most people are without showers. Each person receives one bottle of water and two meals a day — which the members of the family take turns standing in line for up to three hours to get. 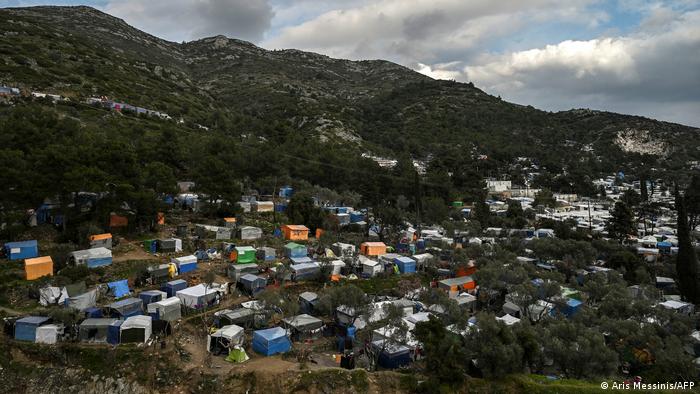 A son, Mohammed, who had studied in university back in Syria, fanned out the meal vouchers for the following days. Whereas at the start each person had received about €90 per month, this lump sum has now been reduced to €75. Omar had heard that the money saved was being used to improve the general living conditions. But, he said, nothing has changed for him. On the contrary: Since restrictions were placed on movement, he said, the situation has become even more tense. He said the situation often got worse at night — when there is neither electricity nor light.

Read more: In Greece, refugees are painted as the enemy, a DW editor writes

After the first two cases of coronavirus infection were discovered in the camp earlier in September, the Greek authorities imposed a lockdown that is to last until the end of the month. Over the past week — including as recently as Sunday evening — fires broke out in the camp. It remains unclear what caused the fires. But Greek politicians are warning of copycat effects following fires at the Moria camp on Lesbos, and even excusing the camp residents of engaging in arson to escape the miserable conditions.

In the future, 2,100 will be held at the camp — 900 of them in a closed-off area where they will wait for decisions on their cases, according to Jonathan Vigneron, project coordinator for Doctors Without Borders (MSF) on Samos. The numbers are taken from a map that the migration minister handed out during his visit. Vigneron said the whole thing reminded him of a prison.

Opinion: There must not be a second Moria refugee camp, a DW reporter writes

"It's a very scary thing to see," Vigneron said. He added that issues that international organizations had asked for clarity on included whether NGOs such as MSF would even be permitted to work in the new camp. The registration procedure for NGOs makes access almost impossible, he said. In an open letter, 68 organizations wrote that conditions in the camp could create "a worrying situation with regard to human dignity."

Displaced people might have a better standard of accommodation and more security at the closed camp, Vigneron said, but they would have nothing to do and no freedom of movement. "The camp is 5 kilometers away from any place," Vigneron said. "It's not marginalizing people: This is segregation by definition."

This article was adapted from German by Tim Jones.

Haim Geron, one of 300 witnesses called to testify against former Israeli PM Benjamin Netanyahu, died in a plane crash off the Greek island of Samos. An investigation into the cause of the crash is ongoing.