Opinion: The helpless hand of humanity after Moria fire

Germany is set to take in 1,500 refugees from Greece. That’s a good thing. But it’s also an example of how Europe’s refugee policy has failed, writes Jens Thurau. 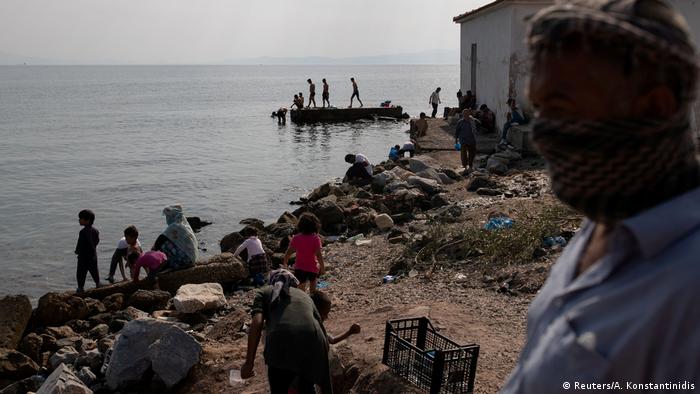 The number is 1,500. That's out of the 12,000 refugees and migrants who lived in the former Moria camp on the Greek island of Lesbos before it burned to the ground. Most of them are still on the island with nowhere to go. Still, 1,500 of them will be flown to Germany.

Every person brought to safety is good news, that has to be said.  But is Germany going it alone, just like in 2015 when the country took in hundreds of thousands of people from across the globe?

No, that is not the case.

Relevant authorities are now busy trying to point out that the estimated 400 families set to arrive in Germany don’t all come from Lesbos — with many living on various other Greek islands. And most of them have already had their application for asylum registered.

The message is clear: Berlin is helping the hopelessly overloaded Greek authorities. But the narrative must not be: the camp burnt down so now there is a clear way to get to wonderful Germany. It’s a despicable narrative that uses hundreds of desperate refugees — children, women, men — as scapegoats.

And yet, this tale depicts the moral, ethical and humanitarian standards that the European Union's refugee policy has encompassed for some time.

Just don’t set a precedent. Politicians in Berlin have said time and again that at the EU's headquarters in Brussels, the Germans are told that taking in refugees is their problem. Those looking the other way — mainly Eastern  European counterparts — will say it the issue has nothing to do with them.

And Germany knows exactly the effect this has: Every humanitarian gesture becomes fodder for right-wing, populist misanthropists.

Every lone move — no matter how small — is seen as part of Germany’s ambition to dominate Europe. If you take away the games in Brussels from the refugee equation, then it becomes clear that in Germany, too, generosity plays a huge part in politics, despite the criticism that Germany is just as callous as many other nations and societies.

Cities and communities here want to take in far more than the mere 1,500 refugees planned to arrive soon. But they’ve come up against European moral impotence.

So what exactly does Europe want to be?

A money dispenser enjoying open borders again once coronavirus has been tamed? Or are there still values that at least a majority of the 27 member states still share? Ones that put Europe in a position to challenge the populists in Washington, the autocrats in the Middle East, in Asia or in Turkey?

In Berlin, it seems that most politicians have given up hope that countries like Hungary and Poland are ready to — or capable of — agreeing on a common refugee policy.  That’s why it is now paramount to build a circle of nations willing to either take in refugees from Greece or Italy  or at least share the cost of the crisis.

What this continent now needs is an uprising of decent, empathetic people — even if that threatens to split society. Otherwise, nothing stands in the way of nationalism and populism.

And those people do exist the decent, compassionate ones. They’re in cities and towns, in churches and clubhouses, in workplaces and in businesses.

The situation on the Greek island of Lesbos is tense, as migrants and refugees remain stranded. Athens is trying to calm the situation, but things have long since gotten out of control.

Greek officials have threatened to make asylum conditional to resettlement in a new tent facility on the island of Lesbos. The German government has signaled its intention to take in more migrants in a "second step."