EU aims to reform asylum policy | Europe| News and current affairs from around the continent | DW | 23.09.2020 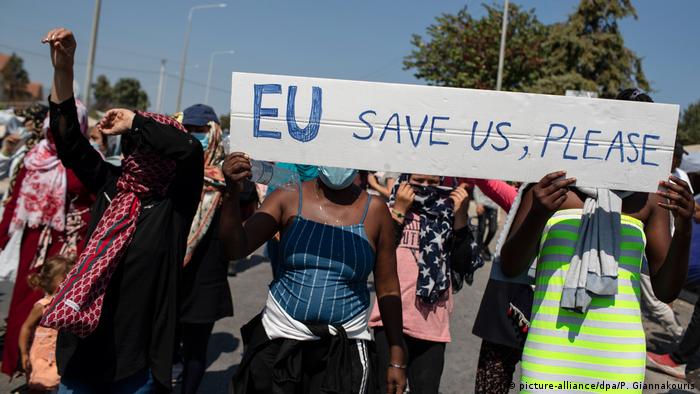 The European Commission will table a plan on Wednesday aiming to reform the bloc's asylum system and organize a fair redistribution of asylum-seekers across the EU. It's the latest in a series of similar, albeit unsuccessful, reform attempts made in 2015 and 2016.

The recent blaze that destroyed the overcrowded Moria refugee camp on the Greek island of Lesbos, EU diplomats have said, has lent the debate new urgency. European Commission President Ursula von der Leyen wants to scrap and replace the existing Dublin Agreement that governs where people can apply for asylum in the EU.

But with unanimous approval necessary for a major shift in asylum policy, it is unlikely the new framework will require countries to take in refugees and asylum-seekers since several EU members have rejected any form of mandatory redistribution.

The wrangling among EU states over who will take in some of the 12,000 homeless asylum-seekers from Lesbos illustrates how politicized the issue has become.

Austrian Interior Minister Karl Nehammer of the Austrian People's Party (ÖVP) said bringing asylum-seekers from the former Lesbos camp to other parts of Europe would "send the wrong signal." He implored his European colleagues "not to give in to violent migrants," by which he presumably was referring to the handful people suspected of setting fire to the Moira camp with the hope of being allowed to travel to mainland Greece.

Rather than accept any asylum-seekers, Austria has sent 55 tons of goods to Greece for the construction of a new migrant camp.

Protests in favor of taking migrants in, such as those held in Germany last weekend, are rare in the EU. Swedish researchers have, in vain, urged their government to take in migrants. Poland, Hungary and the Czech Republic have flat out refused entry to asylum-seekers from Greece and Italy, even though the European Court of Justice this year ruled all three had failed to uphold their refugee quotas.

Anti-migrant sentiments are prevalent throughout much of the bloc, according to a 2020 study by the European Commission's Joint Research Centre. It analyzed regional and European election data as well as other surveys and found parties that explicitly reject migrants took some 60% of the vote in Hungary and Italy. In Portugal and Romania, by contrast, such parties have the least support.  Anti-migrant sentiment in Germany placed in the middle of the European table.

In its annual report, the European Border and Coast Guard Agency (Frontex) states that in 2019, 142,000 individuals entered the EU "irregularly." This refers to individuals who, for example, enter an EU country without a visa or proper documents and then apply for asylum. The number of people entering the bloc in an "irregular" fashion has dropped drastically since 2015.

Last year, most (83,000) "irregular" migrants entered the EU via the Greek islands, followed by Spain (24,000) and Italy (24,000). Frontex has stressed that 720,000 asylum applications were submitted in 2019 — far more than the number of "irregular" entries registered that year. This means a sizable number of migrants entered the EU undetected or applied for asylum in more than one place. A survey among asylum-seekers in Germany last year found that about 40% flew in by plane. Most of them arrived with a tourist visa and applied for asylum once it expired.

The Frontex report also states that an unknown number of migrants has entered the EU without ever registering or applying for asylum. These individuals live largely off the radar. 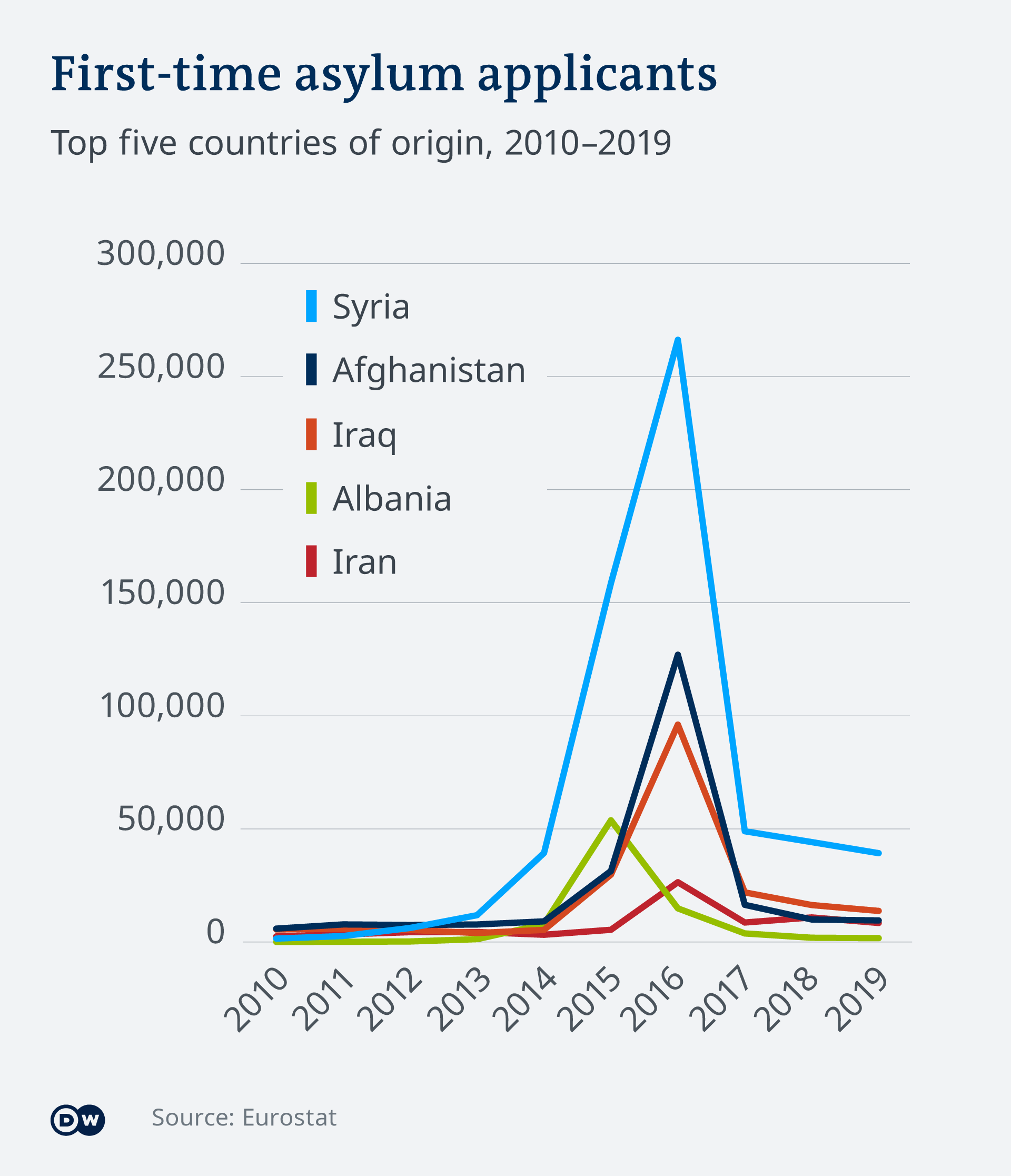 Most applications are made in Germany

Germany received 165,000 asylum applications last year — more than any other EU member state, according to Eurostat. Spain, France and Greece saw the second, third and fourth-most applications, respectively. Two-thirds of all asylum-seekers sought to gain asylum status in one of these four countries. By contrast, 500 applications were filed in Hungary. Small nations like Cyprus and Malta, meanwhile, registered the highest number of asylum applications in relation to their respective population sizes.

Read more: For recognized refugees in Greece, the hardship isn't over

German Interior Minister Horst Seehofer of the Christian Social Union (CSU) said these figures prove the Dublin system — stipulating that the country of first entry is where a person must apply for asylum — does not work. Estimates show that at least 60% of asylum-seekers in Germany who did not enter the country by plane, must have traveled through another safe EU state, where Dublin rules say they should have applied for asylum. These days, months-long trials are held to determine how individuals traveled to Germany to ascertain which EU state is responsible for processing their asylum application. Still, returning someone to such a country often proves extremely complicated.

Margaritis Schinas, the European Union's commissioner in charge of migration, plans to reform this asylum system in three steps. He wishes to see transit countries like Tukey, Libya, Tunisia and Morocco block migrants from traveling onwards to the EU. In addition, he wants to seal the bloc's maritime borders, with asylum applications being processed on the external frontiers. Lastly, the EU hopes to oblige EU states to show solidarity with each other when it comes to migration issues. These are notions that have been suggested in the past but all failed to pass muster for political or logistical reasons.

His plans do not, however, equate to EU-wide quotas. "One lesson we have learned is that some states no longer subscribe to the asylum framework; they do not want to take any refugees in," says Catherine Woollard of the European Council on Refugees and Exiles. "This means an interim redistribution system will only work with countries willing to participate."