A illegal encampment housing some 2,000 asylum-seekers from conflict zones like Somalia and Aghanistan was cleared by police. Migrant advocates worry the camp's inhabitants will end up back on the street. 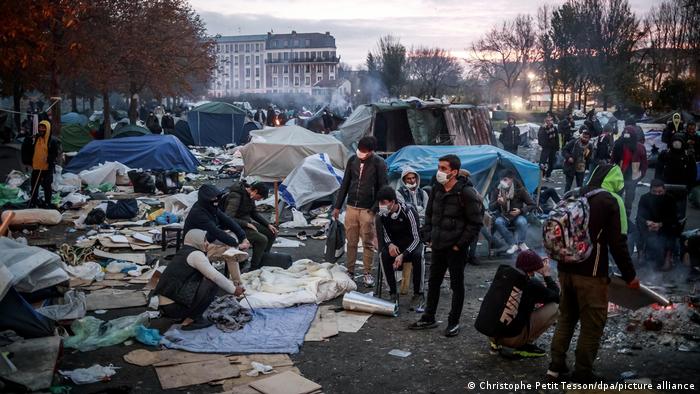 French authorities cleared up a large migrant camp in the north part of Paris on Tuesday. The illegal encampment was next door to the French national sports stadium, the Stade de France, in the suburb of Saint Denis.

Police said they were motivated by safety reasons, in light of the current COVID-19 pandemic. NGOs assisting the migrants at the camp said some 2,000 people were living there, including families with children.

The figure was confirmed by French Interior Minister Gerald Darmanin, who said the inhabitants were living in "miserable conditions."

The evicted migrants were predominantly asylum seekers from conflict zones, including Afghanistan, Somalia, and Sudan.

Police arrived before dawn at the camp, which was composed of a mix of tents and improvised shelters made out of plastic sheeting and cardboard boxes.

Authorities ordered the migrants onto buses, which resulted in a crush as many tried to board at the same time. The Reuters news agency reported that police had deployed tear gas to restore order and disperse crowds. 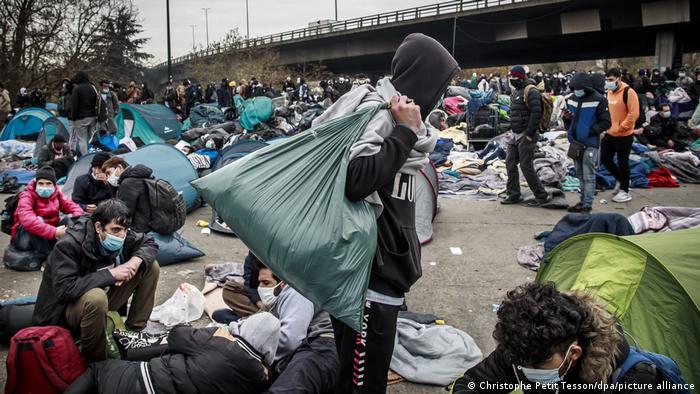 Local authorities pledged that new accommodations would be found for the migrants. Philippe Caro, a volunteer with an association called Solidarite migrants Wilson, which helps people at the camp, said the accommodation being offered was often inadequate.

"In spite of everything, there are going to be people left out on the street," Caro said.

French police have cleared dozens of camps in recent years around Paris. But amid a lack of housing opportunities for asylum-seekers, new makeshift settlements keep reappearing.

Critics of the French migration policy say the evictions are purely symbolic political move, to show that the state cracking down on migrants, but without actually addressing deeper issues.

French rescue boats and a Belgian helicopter were called when a migrant boat was seen in distress off the coastal town of Dunkirk. Two children and two adults have died, officials said.

Police said the boy was bound for the UK when the rubber boat he was sharing with a friend ran into trouble. The French citizenship minister has confirmed the teenager was Sudanese.