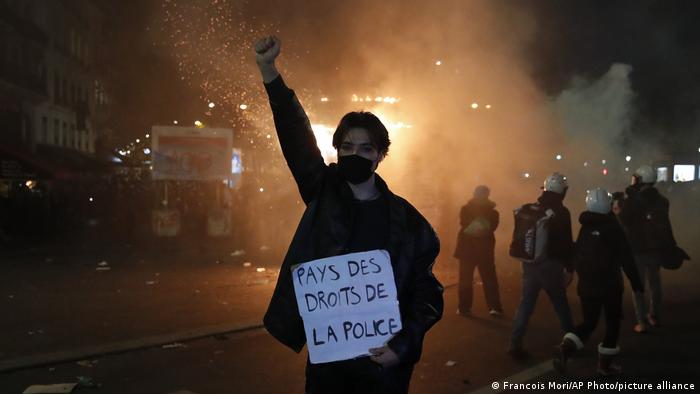 Hundreds of thousands of people have rallied in Paris and many other French cities against a security bill that would — in some cases — criminalize publishing photos of police officers.

Protesters claim the law would be used to shield the police from scrutiny. Just days earlier, a group of policemen was captured on video while brutally beating and abusing Black music producer Michel Zecler in Paris. Critics of the bill claim the proposed legislation could block the publishing of such videos in the future.

Saturday's demonstrators brandished slogans such as "police everywhere, justice nowhere" and "smile while you are beaten." Police fired tear gas at the protesters in Paris, while some of the marchers lit fires on the streets.

"There are clashes going on between what we think are troublemakers dressed in black that seem to be attacking police, but that is just the minority," DW correspondent Lisa Louis said from the scene.

Louis added that people of all backgrounds had joined the protests, including members of the press. The proposed bill would make it a crime to publish photos or videos of on-duty police officers with the intent of harming their "physical or psychological integrity," which critics say would amount to censorship.

Organizers said that as many as 500,000 people across France had taken part in the protests, with up to 200,000 in Paris, reported news agency AFP.

French Interior Minister Gerald Darmanin said a total of 37 officers were injured across the country in the protests, taking to Twitter to condemn what he said was "unacceptable violence against law enforcement."

The draft security law, which has already passed the lower house of the French parliament, aims to protect police officers who are occasionally targeted by terrorists or abused on social media. However, protesters say there are already enough legal protections in place to avert such scenarios. 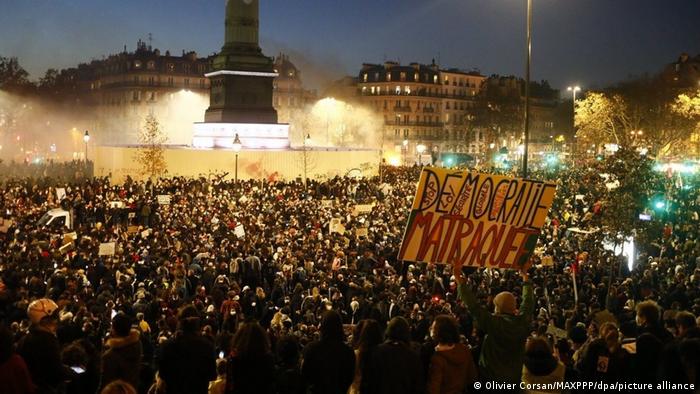 The proposals come as police face accusations of systemic racism beyond the beating of Zecler. Earlier this week, Paris police used what many believed to be excessive force while dismantling a migrant camp in the city, with even the interior minister asking for clarification on the crackdown.

"Many people are outraged about how the police are behaving, and they are saying we need to be allowed to film the police in order to protect ourselves," she added.

The latest protests come months after anti-racism protests in France inspired by the killing of George Floyd in the US.

On Friday, Prime Minister Jean Castex said the government would look into redrafting the disputed Article 24 of the proposed law. However, he was forced to backtrack after Parliament Speaker Richard Ferrand accused him of trying to usurp parliament's role.