Police have fired tear gas at protesters in Paris, with anti-racism rallies held in other French cities. A group of counterprotesters unfurled a banner against "anti-white racism" from a roof of a Paris building. 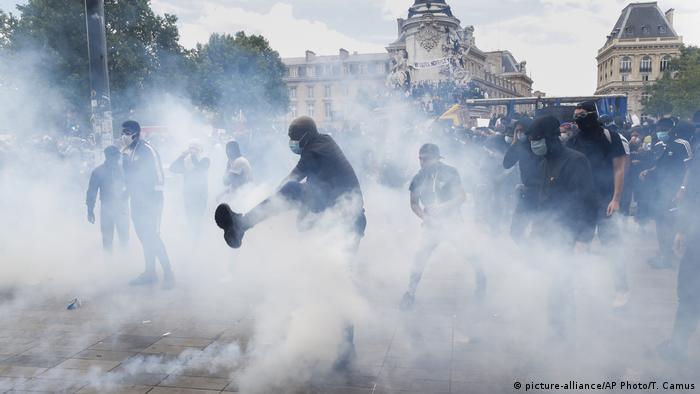 Protesters gathered in Paris, Lyon, Bordeaux and other French cities on Saturday to protest racism and police brutality, continuing the wave of unrest sparked by the killing of African-American George Floyd in the US.

Thousands marched in Paris alone, with the leaders invoking the memory of Adama Traore, a young black man who died after being arrested by French gendarmes in 2016. Protesters unfurled a banner showing a face that was half Floyd, half Traore.

"We are all demanding the same thing — fair justice for everyone," Traore's sister Assa told the protesters. Traore's family claims the 24-year-old was asphyxiated when three officers held him down, while French authorities say the cause of his death is unclear.

"The death of George Floyd... is a direct echo of my brother's death," Assa said. "it's the same thing in France, our brothers are dying."

Banner against 'anti-white racism' cut down

The Paris rally was not authorized by the French officials. The country, which is still reeling from the coronavirus outbreak, maintains a ban on gatherings of more than 10 people. Ahead of the event, police ordered restaurants and shops along the route to close, fearing outbreaks of violence.

While no major incidents were reported in the early stages of the rally, protesters threw firecrackers and police fired tear gas and urged the protesters to disperse on Saturday afternoon.

Parallel to the anti-racism protest, a group far-right counterprotesters unfurled a banner reading "Justice for the victims of anti-white racism" from a rooftop of a building overlooking the anti-racism march. The banner was quickly cut into pieces after the building's residents emerged onto their balconies to remove it.

A police source told Le Parisien daily that 12 people were arrested over the incident, all of the members of the right-wing Identitarian movement.

Police push back against reform

French authorities have already announced a series of measures to limit potential misuse of force by the police, including a partial ban on chokeholds and automatic suspension in case of a "confirmed suspicion" or racist actions or remarks.

The reform was quickly slammed by police representatives, who staged protests of their own. Police union representatives telling Interior Minister Christophe Castaner that without restraint methods they would be left ineffectual. Commenting on the police rallies, Assa Traore said she "wasn't even angry."

"I was ashamed of the French police," she said. In the whole world, the only country where police officers demonstrate to keep their permission to kill is France.''

The day also saw violence in London, where far-right protesters had gathered to confront members of the "Black Lives Matter" movement,

dj/rc (AFP, dpa, AP, Reuters)Every evening, DW sends out a selection of the day's news and features. Sign up here.

Thousands of people joined a banned protest over George Floyd's death in the US, racial injustice and police violence. It began peacefully, but later fires were lit and police reportedly replied with tear gas. (03.06.2020)

A former police officer has pleaded guilty to federal charges in the killing of George Floyd. The incident sparked nationwide protests over police brutality and led to the officer's conviction on state murder charges.