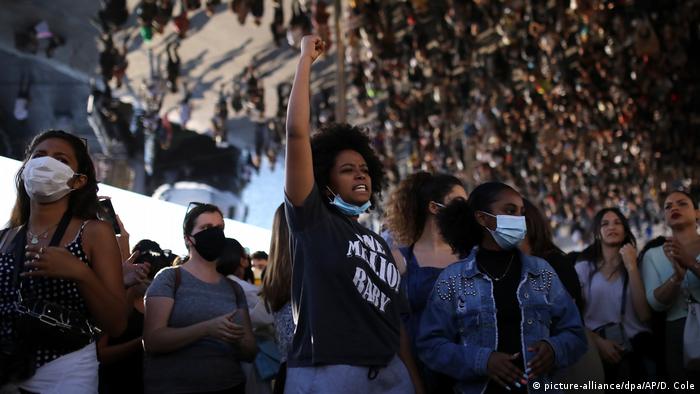 Police in the French capital on Tuesday fired tear gas at protesters who were demonstrating against the deaths of black men in police custody.

Thousands of people gathered at Paris' main courthouse to show solidarity with US protesters denouncing the killing of George Floyd and to condemn the death of a black man — Adama Traore — in French police custody in 2016.

Many of the protesters had taken a knee and raised their fist as police officers and firefighters struggled to disperse crowds and tackle small blazes.

Police said on Twitter that they had intervened because the protests were technically outlawed under coronavirus-related measures. They also argued that the "tone" of the protest call aroused fears of trouble in a sensitive location.
By late evening, authorities said a few groups remained in the area and demanded that all demonstrators go home.

DW's Paris correspondent Lisa Louis said the general feeling in France is that there has not been much change since the death of Traore. In the past few years, a number of demonstrations — in particular the yellow vest protests — have been marred by police violence.

"Parliament is even discussing a new law that would prohibit people from disseminating images of police officers," Louis said. "Many people fear that would remove their protection against police violence."

Traore — a French citizen — died shortly after his arrest in 2016. His family says he died from asphyxiation in the hands of police and, echoing Floyd, that his last words were: "I can't breathe."

Investigations into Traore's death are still ongoing four years after his death due to conflicting medical reports.

The lawyer for two of the three police officers involved claims that Traore didn't die as a result of the conditions of his arrest but due to a pre-existing medical condition.