How many solar panels do we need to save the climate? | Business | Economy and finance news from a German perspective | DW | 06.01.2021

How many solar panels do we need to save the climate?

A zero-carbon-emissions energy system will rely mostly on low-cost solar electricity, experts say. About 100 giant solar panel factories must be built by 2025 for the world to "defossilize" its energy supply by 2035. 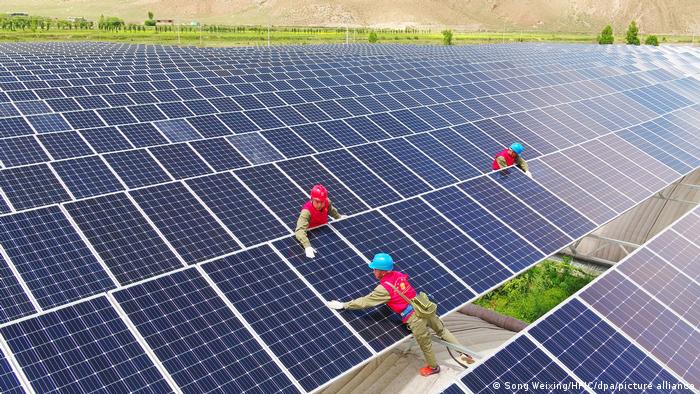 Who will make the solar panels that could save the climate?

"We know the world needs to defossilize its energy systems," says Christian Breyer, professor of solar economics at LUT University in Lappeenranta, Finland, whose research group models transition pathways to future zero-emissions energy systems. "We need to get to net-zero greenhouse gas emissions — as quickly, safely and cost-effectively as possible," he tells DW. "To do that, we need technologically feasible, cost-optimized transition pathways for every region of the world. Our calculations show how we can do that."

LUT's cost-optimized model, published in 2019, shows how a global energy system with net-zero carbon emissions can be achieved. In the model, solar photovoltaics (PV) — solar panels — supply 69% of total global primary energy demand for all purposes, in the year when zero emissions are achieved. The rest comes from wind power, biomass and waste, hydroelectricity and geothermal power.

His zero-emissions scenario doesn't include nuclear power because it's "simply too expensive," Breyer emphasizes. "PV technology is becoming cheaper year by year; the construction costs of nuclear power plants, on the other hand, are rising." Moreover, it's much easier, faster, and less risky to install and operate solar power plants. 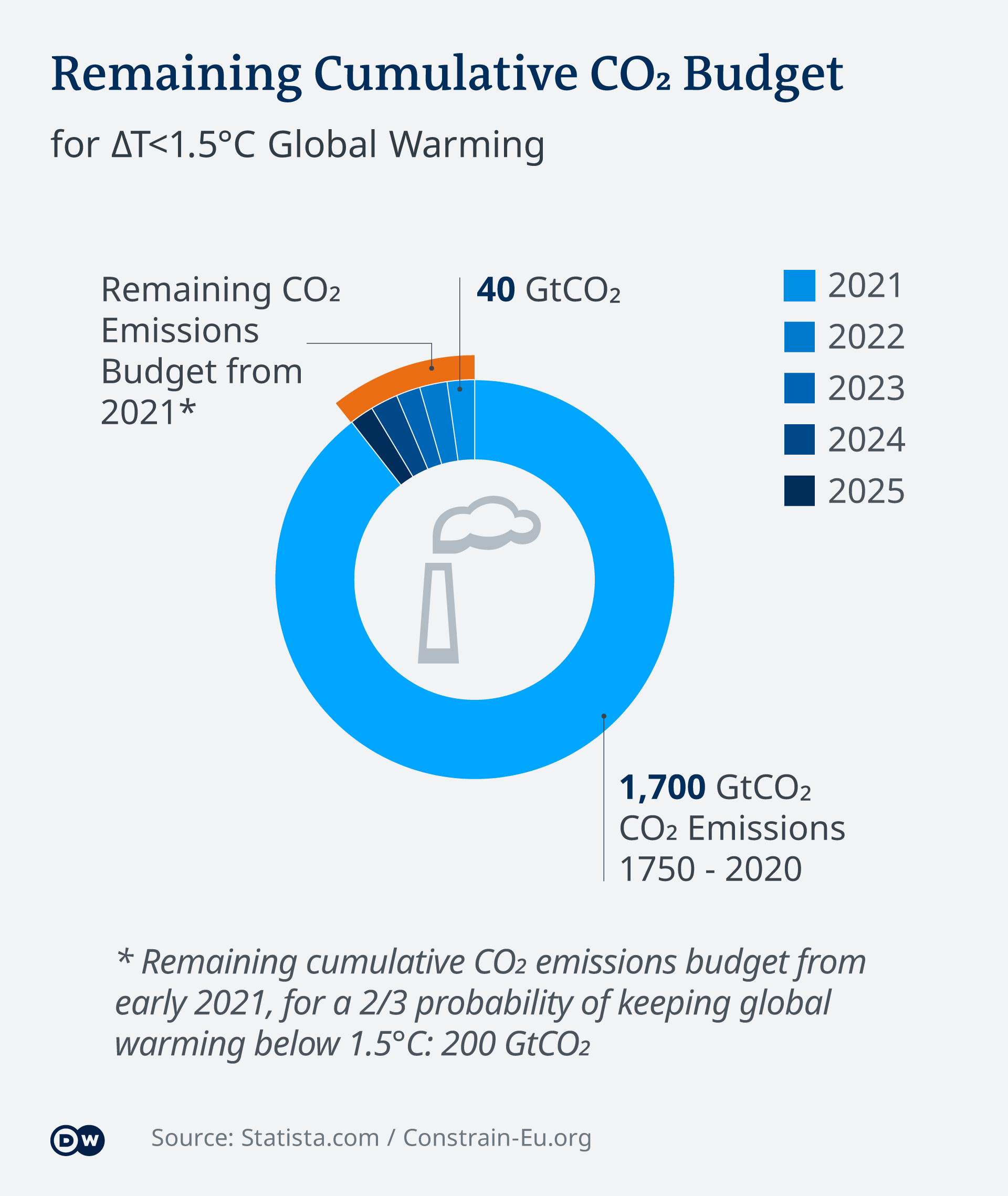 By when must the world stop burning fossil fuels?

First, by when must the globe reach net-zero emissions of greenhouse gases if we're going to meet the internationally agreed goal of keeping global warming below 1.5 degree Celsius (2.7 F)?

Second, how many solar panel manufacturing plants must be built — and by when — to meet solar PV's two-thirds share of all energy produced, if this climate goal is to be met?

DW asked Piers Forster, a climate scientist at the University of Leeds in the UK, how much more CO2 could be cumulatively pumped into the air if the 1.5 C target limit is to be respected — without later having to make massive efforts to remove CO2 out of the air through expensive geoengineering or carbon-drawdown measures.

His sobering answer: As of the beginning of 2021, to have a two-thirds probability of staying below 1.5 C, humanity can release — at most — 195 billion additional tons of CO2 (GtCO2) into the air, beyond the 1,700 GtCO2 already released since the beginning of the industrial revolution (see page 23 of Constrain-EU report).

In 2019 alone, emissions totaled about 40 GtCO2. If emissions stay roughly level for the next few years — which is very likely — the remaining CO2 emissions budget will be used up by the end of 2025. After that, the world will be in carbon overshoot, and on track toward very dangerous climate changes.

The implication? "We must get to zero emissions as soon as possible after 2025," says Breyer. "The current political target year for zero emissions is 2050. That's way too late." 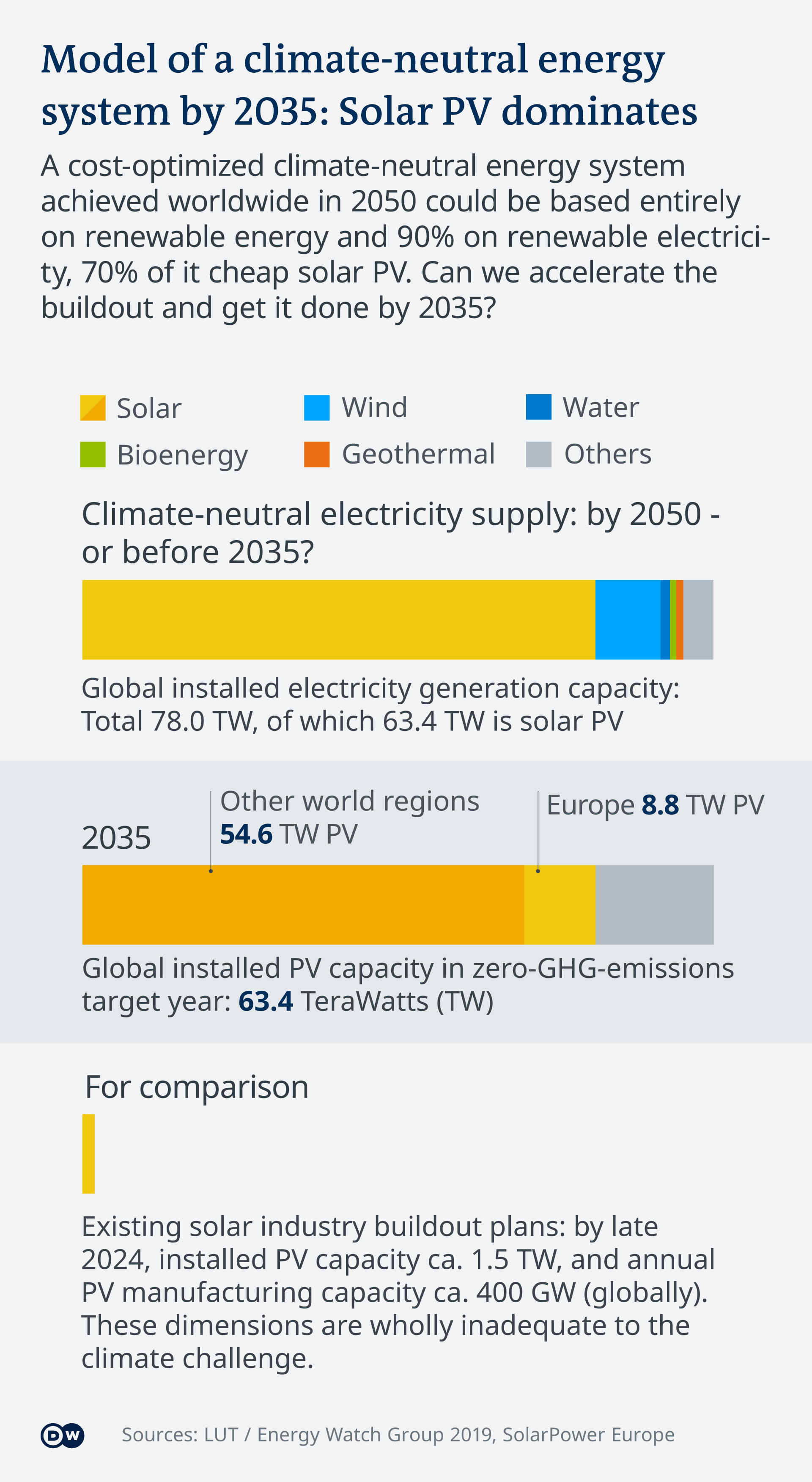 The true cost of coal power

In order to avoid dangerous climate changes and long-term sea level rise, much of the carbon being released into the atmosphere now will have to be taken back out within the next few decades. That's going to be very expensive. It would be much cheaper to expand renewable energy systems more quickly and shut down coal-fired power plants sooner, Breyer says.

Here's why: Producing one MWh of coal-fired electricity causes about 1 metric ton of CO2 emissions. Actively taking CO2 out of the air and permanently storing it may cost about €100 ($122) per ton in the long run. By comparison, one MWh of electricity cost an average of €33 on the electricity exchange in Germany in 2020.

This means that coal-fired power is actually about four times more expensive than electricity from PV or wind power plants — or it would be if the financial costs of actively recapturing and storing each ton of carbon released from fossil fuels burning were included in the price of each MWh of coal-fired power, as economists have long recommended.

"This doesn't even include the health costs of heavy metal emissions from coal-fired power plants. In Germany alone, this pollution causes about 5,000 premature deaths every year, and in Asia, nearly a million," Breyer says in a nod to estimates by public health experts. 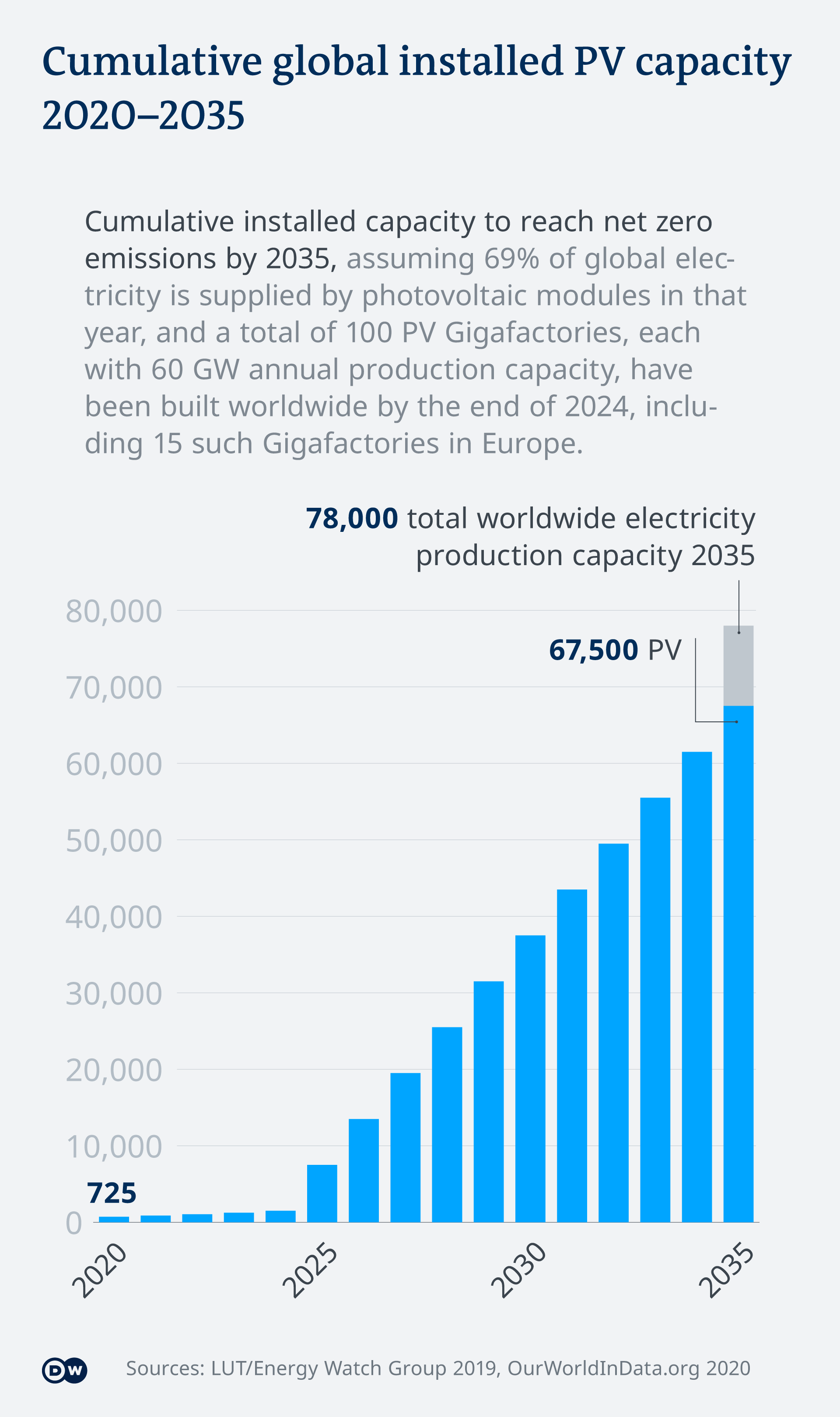 A prosperous carbon-neutral global civilization with net-zero emissions will be 90% powered by electricity, the LUT model estimates — in part directly, in part via synthetic fuels (e-fuels).

And 69% of this electricity will come from solar PV. How many giant PV module factories will be needed to achieve that future — and by when must they be built?

It depends on how badly we're willing to overshoot the world's remaining 200 GtCO2 carbon budget. Let's imagine a transition to an entirely renewable-energy-powered global system by 2035, and let's assume that the new PV module factories will be in place by 2025, so they can get the job done within 10 years.

The world's largest PV module factory by far is currently under construction in China's Anhui province. It will have a production capacity of 60 GW per year, according to its developer, GCL System Integration. For comparison, global PV production capacity in 2020 was about 200 GW, most of it in China.

The LUT model envisions 78,000 GW of installed renewable electricity generating capacity globally when the world reaches net zero carbon emissions. This includes 63,400 GW of solar PV, about 8,800 GW of which will be in Europe. 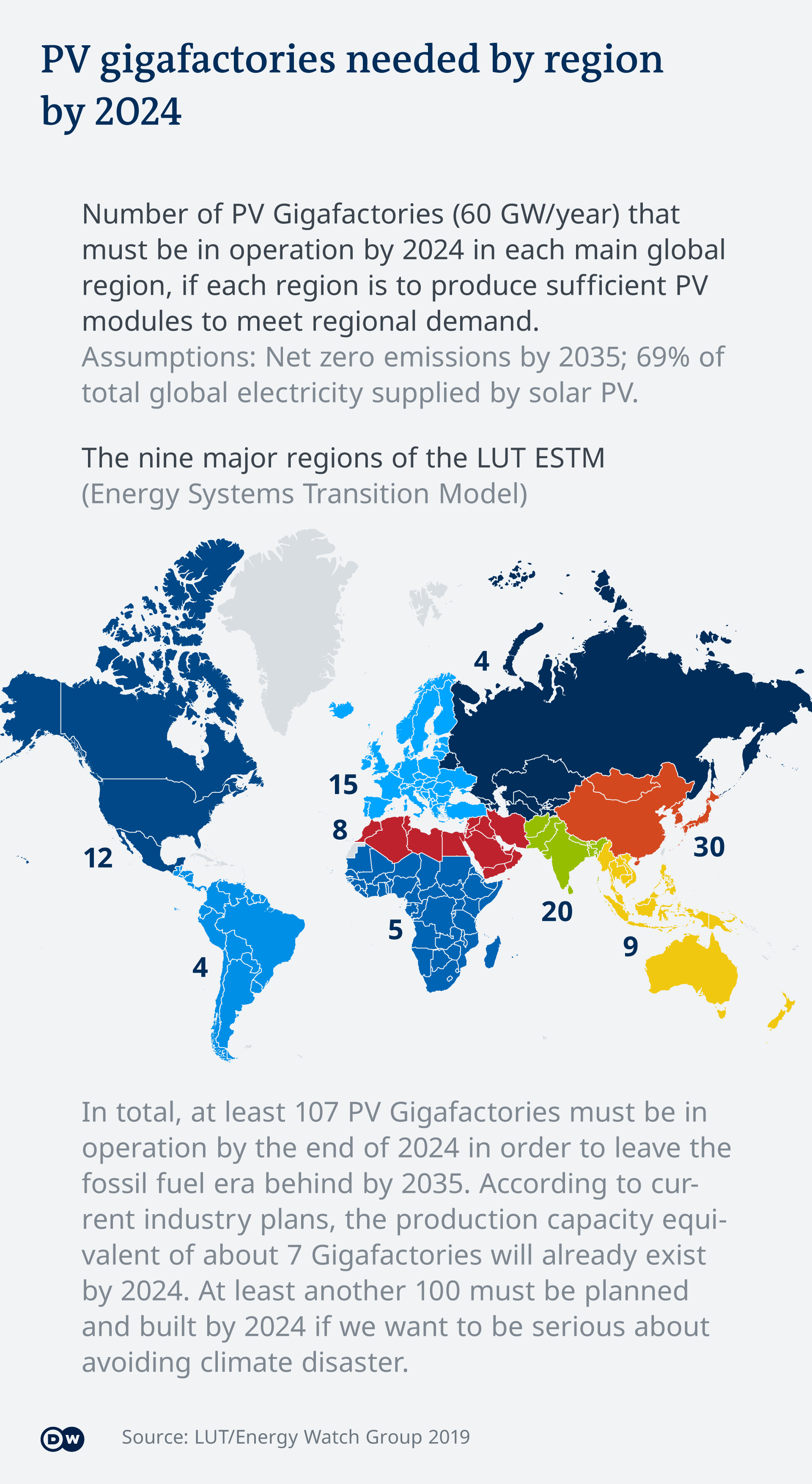 Will we have built enough factories by 2024 to produce the required amount of solar panels by 2035? Not even close. Under current industry plans, by 2024, only 400 GW annual PV production capacity will be in place, and only about 1,500 GW of solar PV modules will already have been produced and installed worldwide. To achieve a zero-emissions scenario by 2035 in which two-thirds of global energy is produced from solar power, another 62,000 GW of PV modules ( 62 terawatts) must be produced and installed between 2025 and 2035. That's 6,200 GW per year, every year from 2025 to 2035.

This means that to do justice to the climate challenge, we'll need 15 times more production capacity built by 2024 than currently planned. In other words, we'll need to build another 100 Gigafactories the same size as the 60 GW Anhui PV module factory by 2024, for a combined 6,000 GW annual production capacity. If Europe is to produce its own PV modules, rather than importing them, 15 of those 100 giant factories must be sited in Europe.

This aligns very well with Elon Musk's claim in 2016 that with about 100 PV Gigafactories, enough solar modules could be produced to power the world for all purposes.

What these numbers tell us is that a rapid expansion of renewable energy as the core element of a global race to net zero emissions is technologically feasible. After all, it's certainly possible for humanity to build and operate 100 giant factories, 15 of them in Europe. The crucial question we face is: Will we finally take the warnings of climate scientists seriously, pick up our tools, and get the job done?