The student environmental activist group has issued a concrete set of demands to German politicians, including a greenhouse gas tax and net-zero emissions by 2035. 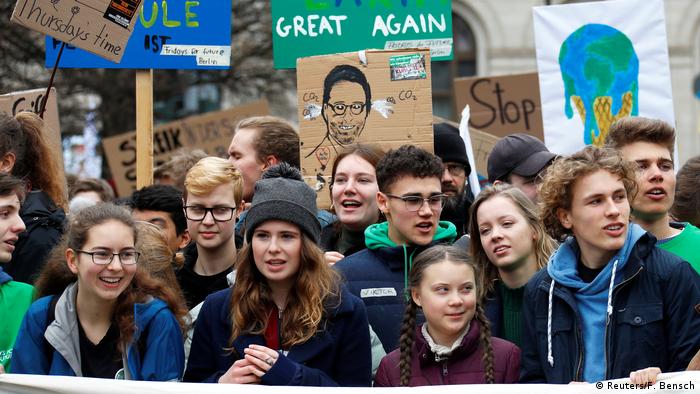 The German branch of environmental activist group Fridays for Future outlined their climate change policy goals at a press conference held on Monday in Berlin.

The paper,  "Our demands for climate protection,"  seeks to put pressure on politicians to take quicker action to prevent continued global warming.

Fridays for Future sprang up after 16-year-old Swedish high school student Greta Thunberg staged sit-ins in August 2018 in front of the Swedish parliament building every school day for three weeks.

Thunberg inspired other young people around the world to organize protests every Friday, demanding their governments take action to limit global warming under the 1.5 degree Celsius limit specified in the UN's Paris climate agreement.

Fridays for Future said that its paper was drawn up with input from groups of students from across Germany in coordination with climate scientists. The activists said that student strikes would continue until their demands were met.

Their efforts and energy were praised by Foreign Minister Heiko Maas on Tuesday:

What are the activists demanding in Germany

Half of the targets set by the group are for the longer term:

Meanwhile, the group has also suggested three immediate changes, to be implemented in 2019:

The activists said that their climate goals for Germany would need to be achieved in a "socially acceptable" manner and "in no way put a one-sided burden on lower-income people."

Activist Linus Steinmetz told reporters on Monday that the movement's goal was to influence the "the highest levels" of politics.

The platform also called for coordinated political action on local and national levels.  Industries including energy production, transport, construction and agriculture would need to make an "enormous effort" to avoid "climate catastrophe."

"We have social and political influence and our movement has reached an unimaginable size," said Steinmetz.

Although the movement welcomes more political recognition, the activists say they do not want to be appropriated for political advantages.

"We have been praised by many politicians," said activist Sebastian Grieme. "However, that hasn't resulted in any concrete action. That is wrong and false."

Living Planet: School's out... for the climate

Thousands of mostly young people took to the streets across the globe calling for action to combat climate change. In Germany, the war in Ukraine and the role of fossil fuels in it added a new dimension to the sense of urgency expressed by protesters.