Munich Security Conference brings trans-Atlantic′s Fantastic Four back together | Germany | News and in-depth reporting from Berlin and beyond | DW | 18.02.2021 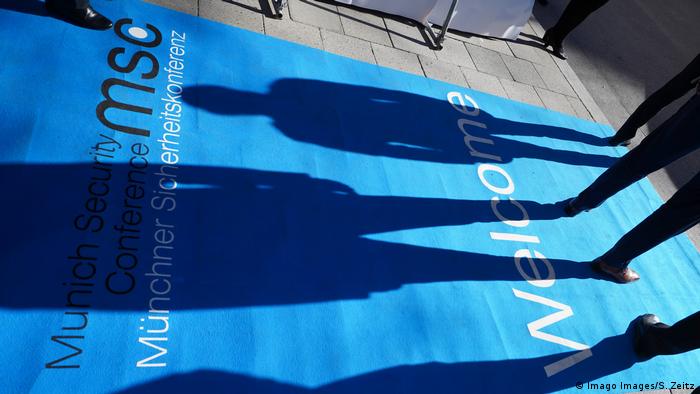 Organizers of the Munich Security Conference are facing the challenge of how to squeeze their annual get-together of top global security officials and policymakers into a special event constrained by the COVID pandemic.

Follow the live updates from the conference as they happen.

The multi-day conference that has taken place in Munich every February since 1963 is for now an online event, scheduled to wrap up after just about three hours on Friday.

"If this were a normal security conference, the president would show up with dozens and dozens of staff members," MSC Chairman Wolfgang Ischinger told DW. "We could engage with these people and share our concerns and interests" in a way not possible virtually.

A full conference would also include a far wider range of global security players. China, Russia, and the Middle East present major contentious issues, but none is represented.

"This is an American-European event," Ischinger said, "to get our act together and engage on global issues like climate, the pandemic and terrorism."

Who's who of foreign affairs

This will be the first time a sitting US president speaks at an MSC event. Biden twice attended the MSC as Barack Obama's vice president, and again in 2019.

The first hour is set aside for top global issues such as the COVID-19 pandemic, with UN Secretary-General Antonio Guterres, Bill Gates and World Health Organization Director-General Tedros Ghebreyesus due to speak.

"Literally no one listened," Ischinger said, referring to Bill Gates' address at the 2017 security conference that highlighted the pandemic danger. "If we had listened, we wouldn't be in this terrible situation today."

The climate crisis will also receive attention, with a statement from Biden's climate envoy, John Kerry.

MSC organizers have had to accommodate an expanding list of high-profile speakers without shortchanging any of them or significantly lengthening the overall time frame.

Initially, Biden and Merkel were the only heads of government involved. Macron was confirmed on Tuesday and Johnson late on Wednesday. NATO and EU leaders will also speak, and organizers say last-minute changes or additions are still possible. Each speaker gets about 15 minutes of virtual stage time.

Leaders will address the event live from afar. At a regular MSC, they would have the opportunity to engage each other directly, either officially or on the sidelines. Instead, Ischinger will hold brief Q&As — with the exception of Biden, whom Ischinger said may not take questions.

If he does have the chance, Germany's former ambassador to the United States said his top question for the president would be about China, which he called one of the biggest challenges to trans-Atlantic cooperation.

"If we fail to see eye-to-eye on China, we're going to have endless problems, endless friction, across the Atlantic," Ischinger said. "Our interests in regards to China are not identical."

The US has security commitments in the Asia-Pacific region that the EU does not, which allows the EU to view its relationship with China as largely commercial. China overtook the US as the EU's top trading partner in 2020, according to EU statistics released on Monday. The EU inked an investment deal with China earlier this year, while US tariffs put in place during the Trump administration remain under Biden.

The European Union does not always have the luxury of being able to speak with one voice like the US can. In their remarks, Merkel and Macron — who lead the EU's largest member states — will have to balance their countries' unique bilateral interests with the US and their roles in promoting a more integrated EU. Both have said they want the bloc of 27 member states to better define itself among global powers, but have not always agreed on what those common policy goals should be or how to get there.

Serious differences remain, both across the Atlantic and within the European community itself. The EU has sided with the US on pressuring Germany to give up its Nord Stream 2 pipeline with Russia, but the US has less successfully convinced allies to take a more circumspect approach with China — both on trade and 5G technology.

Domestic politics also play a role. Biden's Democratic majorities in Congress are safe until November 2022, but several cabinet and other top positions, including key ambassadorships, remain empty. Merkel will step down as chancellor later this year after more than 15 years in power, leaving German politics in a state of introspection as it considers what comes next. Macron faces a tough path to reelection next year. As in 2017, far-right leader Marine Le Pen poses a serious threat.

For Boris Johnson, Friday's MSC will be his first trans-Atlantic appearance since he helped push the United Kingdom out of the EU.

While the US needs to prove to its European allies that it is still a reliable and permanent security partner, the US also wants assurances that Europe is willing and able to take on more responsibility for its own defense and other global issues.

It is a busy week for trans-Atlantic relations. Friday's MSC immediately follows a G7 leaders meeting hosted by Johnson, which Biden, Merkel and Macron will also attend. Again: All discussions are online only. On Wednesday and Thursday, Biden's Secretary of Defense Lloyd Austin made his NATO debut during a closed-door teleconference with fellow defense ministers. Defense budgets as well as the military alliance's future in Afghanistan, and response to Chinese and Russian aggression, have topped their agenda.

The meetings are meant to set the stage for bigger summits over the course of the year. That includes the MSC, which organizers hope can still happen in person — pandemic permitting.

As COVID-19 spread across the European continent and the United States, divergent national responses proved to be yet another reminder of fraying transatlantic ties, says the president of the German Marshall Fund.