Berlin and Paris said they plan to move 400 minors from the Greek migrant camp destroyed in a blaze. Angela Merkel said she hoped other EU nations would assume a "shared responsibility" and accept some of the minors. 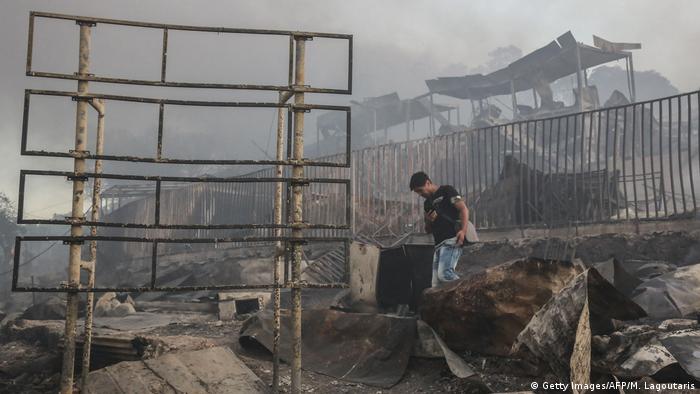 German Chancellor Angela Merkel and French President Emmanuel Macron agreed to a deal that would allow 400 unaccompanied minors from the Greek migrant camp to move to other parts of the European Union, Merkel confirmed on Thursday.

Merkel, whose country currently holds the EU Council presidency, said she agreed to take the unaccompanied minors at the request of the Greek government. She said she hopes other EU countries will agree to take some of kids.

"As a preliminary step we are offering to Greece to accept refugees who are minors — other steps must follow," Merkel said during a panel discussion Thursday in Berlin. The European Union must "finally assume more shared responsibility" for migration policy, the German chancellor added.

"The first step is the offer to Greece for the underage refugees, and more steps must follow," Merkel said. "Germany is committed to this responsibility. But we cannot be satisfied with European migration policy — there isn’t one at the moment."

The Netherlands said Thursday it would take in 100 unaccompanied minors and families with children from the camp. "In this special situation, the government believes that extraordinary steps are necessary," Ankie Broekers-Knol, a Dutch state secretary, said in a letter to parliament.

Some 13,000 people in total had been living in the overcrowded the camp the Moria refugee camp, the largest in Europe. The camp was destroyed in a fire earlier this week that left thousands in need of emergency housing.

At a press conference on the Mediterranean island of Corsica on Wednesday, Macron had said the "terrible images, a terrible reality" meant that "we must show solidarity with Greece and also live up to European values."

But the Franco-German initiative is not without detractors. Beatrix von Storch, deputy leader of the far-right populist Alternative for Germany party, said accepting any people from the camp would be seen as a "reward."

"This would send the very wrong signal," she told DW. "We have to send a very strong signal that the abuse of political asylum is not accepted. If they burn down the refugee camp, they will have to stay."

Instead of allowing the the people who had be stuck living in the camp to travel to other parts of the EU, von Storch said, "We have to very rapidly reconstruct the refugee camp." Otherwise, she added, it would "create an incentive for the next arson."

People living on the side of the road

Thousands of asylum-seekers languished on Greek roadsides on Thursday, homeless and hungry, as government efforts to create new temporary shelters have been delayed.

Many of them were families with young children, who spent a second night out in the open, without tents or even basic bedding. Some of the homeless migrants had to trek to the nearest villages for water and other supplies.

Red Cross: refugees must be evacuated

Francesco Rocca, president of the International Federation of Red Cross and Red Crescent Societies (IFRC) said on Thursday that it was a "humanitarian imperative" for the EU to evacuate the migrants, following the fire.

"There is an urgent need to move migrants from the Greek islands to the mainland," Rocca told a virtual press conference in Geneva.

"Thousands of people are living in unacceptable conditions on the Greek islands," Rocca said.

"This is a European crisis which requires concrete acts of solidarity by EU member states. Simply containing people is not the solution," he added.

The island of Lesbos is the main port of entry for arrivals in EU member state Greece because, due to its close proximity to Turkey. The Moria camp had long been several times over its official capacity.

Greek authorities have said that the fires that destroyed much of the camp were deliberately started, with the first one Tuesday evening set by residents angered by quarantine measures imposed to contain a COVID-19 outbreak after 35 people tested positive.

The situation has angered the locals, who have long expressed frustration with the camp. A local group blocked a secondary road leading to the camp to prevent machinery from reaching the camp to clear up the debris.

Moria community head Yiannis Mastroyannis defended the protesters, saying they were peaceful and residents from the village and outlying areas just wanted a return to normality, without new tents on the fire-ravaged site.

"In the past few days we've been living through unprecedented situations with daily fires," Mastroyannis said.

"We've reached our limits. We're anxious, we feel insecure, we're fed up, we don't know how to act any more,'' he added.

Greece has confirmed the first case of COVID-19 at an overcrowded migrant camp on the island of Lesbos. Officials say the infected man has been isolated and camp authorities are tracing his contacts.