Firefighters have tried to contain new blazes at Moria just a day after thousands of refugees fled fires at the camp. Critics have called on the EU to rethink migration policy, calling the fire a "political disaster." 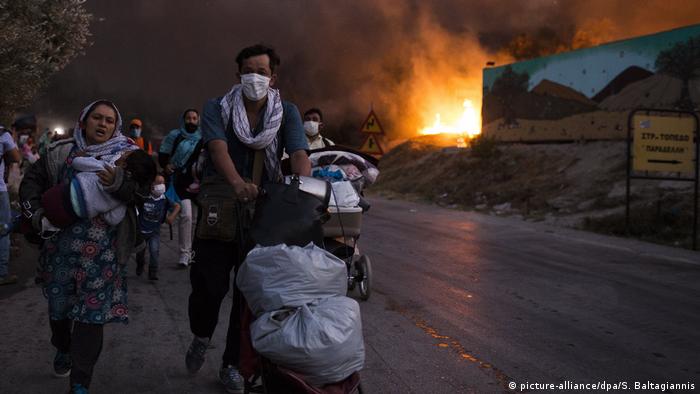 A new fire broke out on Wednesday night at Greece's largest refugee camp just a day after blazes forced thousands of refugees to flee the facility. The fires erupted in parts of the camp that had not caught fire on Tuesday night.

Greek authorities have launched an investigation to determine who started the blazes after local media reports suggested migrants had done so to protest lockdown measures enacted to contain a coronavirus outbreak at the camp.

Greek Migration Minister Notis Mitarachi backed those allegations, saying that although the initial cause of the blazes remain unknown, "what is certain is that the fire was started because of the quarantine by asylum seekers in the facility."

"Instances of unlawful behavior such as the ones we experienced yesterday will not be left unpunished," said Mitarachi. "Such behavior is not acceptable, and also respect for law and order is a necessary precondition for the asylum process." 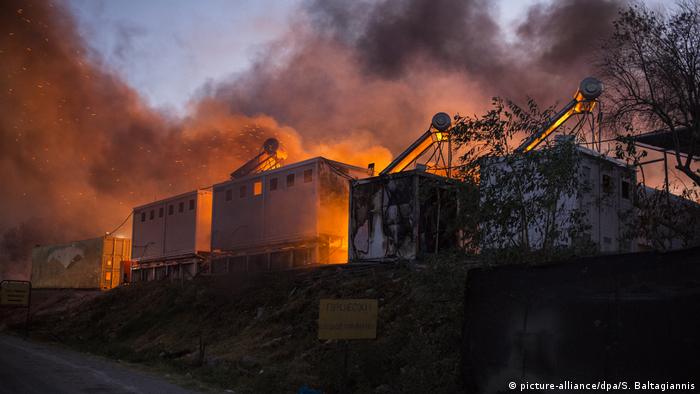 But critics have also taken aim at Greek authorities as well as the EU for failing to find a sustainable solution for dealing with Greece's overcrowded migration facilities.

Prior to the fires, the Moria refugee camp hosted more than 12,000 people, four times more than its maximum intended capacity.

Erik Marquardt, a Member of the European Parliament (MEP) with Germany's Greens, told DW that the fire represented a "political disaster" for Europe for failing to better manage the 2015 migration crisis.

"The situation we have there is a big problem. This kind of catastrophe can happen every time," Marquardt said. "We should feel ashamed for that."

Marquardt called on the German government to address the underlying issues at similar camps, saying it should shoulder the burden of relocating some of those displaced by the fires to Germany.

"How much more suffering is needed to actually make all the national leaders act, to make the European Commission act and to commit to relocating these people away from these camps, away from these horrible situations?" Damian Boeselager, another German MEP, told DW.

However, German Foreign Minister Heiko Maas said the German government had already reached out to Greek authorities and offered support.

"We will not leave Greece alone with this situation — and above all — we will not leave the people in this camp alone," said Maas. "I believe that the European Union as a whole has a responsibility."

Other European figures backed calls for a European approach to irregular migration.

"This was a time bomb," Jan Egeland, who heads the Norwegian Refugee Council told DW. "Now it has gone off and hopefully this is the wakeup call that the leaderships in the European capitals need."