Several fires have mostly destroyed the Moria refugee camp, home to more than 12,000 asylum seekers. There are no known casualties so far. Authorities are now investigating reports of arson. 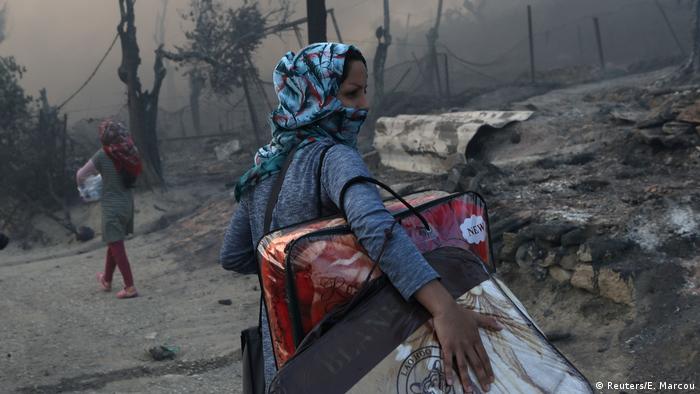 Firefighters on Wednesday fought to contain multiple fires at Greece's largest migrant camp, located on the island of Lesbos.

Thousands of residents fled from the camp, but were stopped by police vehicles. Most were being guarded by police on a nearby highway. There is no suggestion of injuries or casualties.

"The whole camp is on fire. Everything is burning. People are escaping. Their homes in Moria are gone," said local refugee support group Stand By Me Lesvos.

"The fire spread inside and outside the camp and has destroyed it," Stratos Kytelis, mayor of the island town of Mylinene told local radio.

"It is a very difficult situation because some of those who are outside will include people who are positive [for coronavirus]," he added.

A Somali refugee residing in Moria tested positive for the novel coronavirus earlier this week, triggering a host of lockdown measures in a bid to contain the outbreak.

At least 35 people at the camp had tested positive for COVID-19 as of Tuesday.

Some of the firefighters said they "met resistance" from some of the camp's residents as they worked to suppress the blazes.

Greek authorities said the cause of the fires remain unknown. Local media reports suggested the fires may have been started deliberately to protest lockdown measures imposed on the camp earlier this week.

Health authorities said some of the migrants who had been placed in isolation were living in a separate site not affected by the fire.

Government spokesman Simon Petsas said that arson was being considered as a possible cause.

Firefighters were also battling two other forest fires on the west of the island.

Former European Migration Commissioner Dimitris Avramapolous told DW that catastrophes on this scale happened because "this part of Europe is still facing a migrant crisis."

Lesbos, which lies near Turkey and is common entry point for migrants to the European Union, is now facing a huge challenge of rehousing thousands of residents.

"The regional government I spoke to called on Athens to place Lesbos in state of emergency," DW's Anthee Carassava said. "That would allow the military to come in and assist in the situation."

"The logistical challenge now is to find a place big enough to house the people in safety away from the rest of community," she added.

"It is a disaster that has been waiting to happen because successive governments have failed to resolve overcrowding issues."

Eva Cosse, Greece researcher at Human Rights Watch, said the conditions on the islands make it impossible to adhere to the appropriate public health guidelines designed to curb the outbreak.

"Restricting thousands of women, men and children in severely overcrowded camps, where living conditions are unacceptable, makes it impossible to isolate people exposed to COVID-19 or to comply with minimum preventive and protective measures," Cosse said.

German MEP Erik Marquardt, of the Greens, said Europe has failed politically for not better tackling overcrowded camps such as Moria.

"There were always fires, but this is different," he said in a tweet. "Moria is burning."