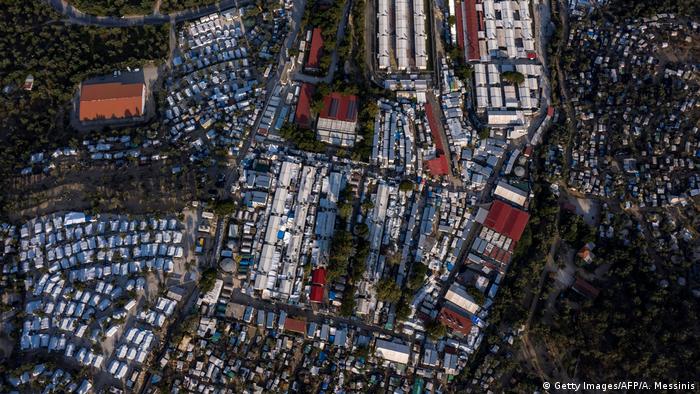 Moria refugee camp on the Greek island of Lesbos is the biggest in Europe. Originally conceived to hold 3,000 people, there are now 13,000 people living in extremely cramped conditions in makeshift tents and containers.

So far, there has not been an outbreak of coronavirus — but NGOs are warning that it's just a matter of time before an outbreak hits the island that is ill-equipped to cope.

Caroline Willemen, a field coordinator with Doctors Without Borders, is concerned about the situation. "I know that this is not a scientific comparison, but in a time when all major events have been canceled because there is too much risk of infection, this place is simply unthinkable," she tells DW. 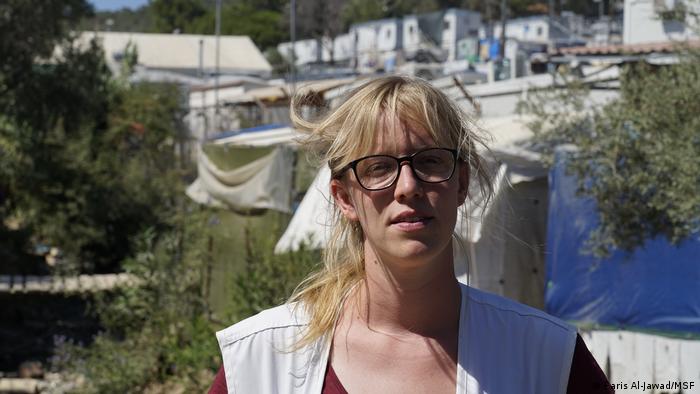 Caroline Willemen, from Belgium, works as a field coordinator for Doctors Without Borders (MSF) on Lesbos

In Mytilene, the capital of Lesbos, just 10 kilometers away, the virus is already spreading.

Generally, Greece has seen an increase in cases over recent days and weeks. Authorities have called on people to wear masks, socially distance, wash their hands, disinfect, and self-isolate if they feel unwell.

"This is totally unrealistic in Moria," says Willemen. "Even if people spend as much time as possible in their tents, they still eat three times a day with thousands of other people. The same goes for the restrooms and showers. It is impossible to avoid the masses."

It is also impossible to wash one's hands regularly at the camp, she says, adding that because there are so many people in such a small space — with sub-standard hygienic standards — the conditions pave way for a rapid spread of the virus. 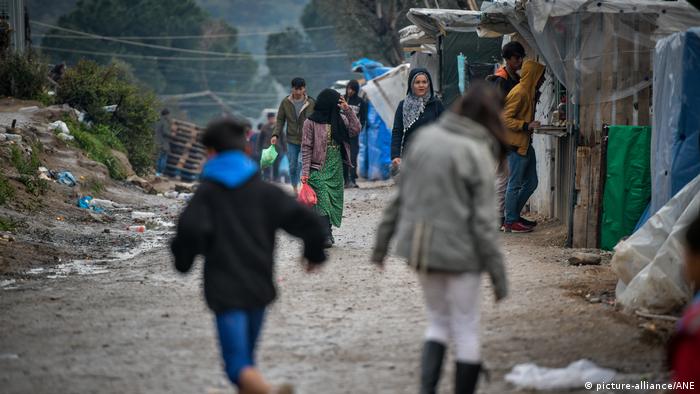 Crowds are impossible to avoid at Moria

So far, the Greek authorities have only implemented symbolic measures. In March, the government called on refugees and asylum seekers in Moria to follow hygiene and safety regulations, in addition to restricting their movement. Since then, only 150 people per hour have been allowed to leave the camp.

The rest of the population on Lesbos was also subject to a strict lockdown in spring but they have been allowed to move freely for almost two months. The people in Moria camp have seen restrictions on their freedom of movement extended seven times.

The number of boats arriving with refugees and asylum seekers from Turkey has increased significantly this summer. On arrival, they are questioned about possible COVID-19 symptoms and their temperatures are taken.

There are also two quarantine stations on the island where new arrivals have to spend a week, but the conditions are rather opaque, according to the freelance journalist Franziska Grillmeier, who has lived on the island for years.

She says the media has not been allowed to access the camps and that there are no medical or legal provisions. "Nobody knows exactly what happens there," she tells DW.

"I understand that some people who are infected, but the problem is that for those who came to Lesbos before these new arrivals, the clock has been put back and they have to start their isolation from scratch if someone tests positive," she adds.

Grillmeier says the government was using the COVID-19 pandemic to push through its own agenda. "To lock people up more. And to widen the divide between the Greek population and the refugees." 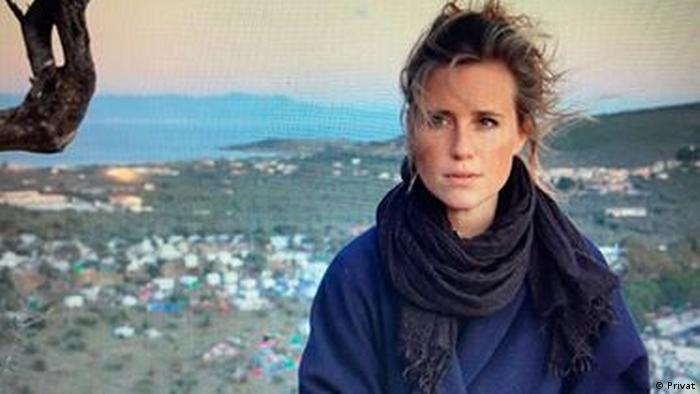 Journalist Franziska Grillmeier has lived on Lesbos for years

The freedom of NGOs is also being restricted, says Grillmeier. "The fewer independent actors there are, the freer the government is."

Willemen, with Doctors without Borders, has also seen a shift. "We had rented a warehouse and set up a COVID-19 clinic for refugees," she explains, adding that the hospital in Mytilene had welcomed the move because there are only six intensive beds for a population of 100,000 on the island.

The plan had been to equip the makeshift clinic as soon as possible. But then the authorities sent a letter, telling the NGO that some of the island residents had complained. Doctors Without Borders was fined €35,000 and threatened with criminal charges related to urban planning regulations.

Willemen says she does not understand what happened, since Doctors Without Borders had informed the local authorities and national authorities of its plans — and had even invited officials to visit the clinic. Nonetheless, the clinic is now closed and the 50 members of staff who had been trained up to work there have lost their jobs.

"The fine is one thing but legal action is a risk that we cannot take," Willemen says.

She adds that it will soon become clear that it was a mistake to forbid the clinic from opening.

"It is sheer luck that there has not been an outbreak yet," she says, especially as there were 300 or 400 people who belonged to the high-risk category in the camp, and at least 48 people have tested positive on the island so far.

"It is possible that there are some positive asymptomatic cases. But we think that it is unlikely that the virus has spread widely because the chances of not seeing any symptomatic cases in a population of 13,000 are very slim."

But, she says, it is only a matter of time until this all changes.

The North Rhine-Westphalia premier — who's seen as a potential successor to Chancellor Angela Merkel — has been visiting refugee camps in Greece. But after visiting Moria camp on Lesbos, Laschet had to make a swift exit.