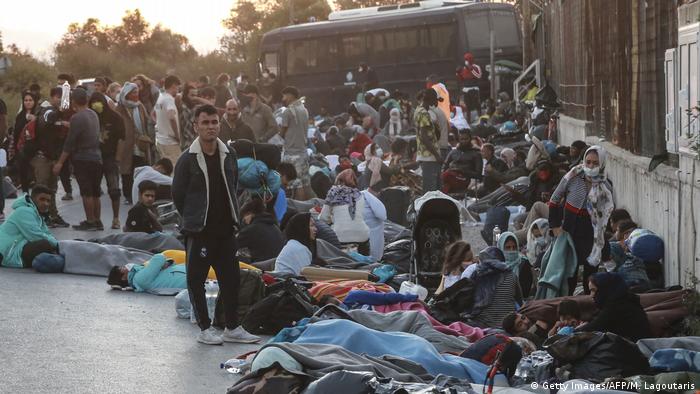 Germany's most-populous state of North Rhine-Westphalia will take in up to 1,000 of the migrants displaced after a fire tore through a refugee camp on the Greek island of Lesbos, State Premier Armin Laschet announced Wednesday.

"The pictures from Moria are disturbing. The people running from the fire have lost everything, even the roof over their heads," Laschet said in a statement.

"What happened in Moria is a humanitarian catastrophe," he wrote on Twitter.

"With the European Commission and EU member states, we need to clarify as quickly as possible how we can support Greece. This also involved other willing countries taking in migrants in the EU."

German Interior Minister Horst Seehofer also formally offered Greece help in dealing with the crisis, but did not specify whether Germany would be willing to take in more refugees. Instead, he offered "tents, medicine and everything that they need urgently now."

Over 12,000 migrants were displaced early in the hours of Wednesday morning when the fire spread through the camp, one of the largest in Greece. The cause of the fire is not yet known.

The former EU Commissioner for Migration and Home Affairs, Dimitris Avramopoulos, told DW the situation in Moria was "dire."

"It is a European issue," he said. "And the European Union has to stand by Greece and these were the assurances given today by the competent European commissioners."

He also admitted that situations in the camp, which has been described as over-crowded, were poor, but pointed the finger at a lack of European involvement in refugee camps.

"It has not been easy to handle this delicate situation," Avramopoulos explained. "The Greek authorities have provided whatever they could for these desperate people. But it is true to say that a number of migrants were stuck and the hotspots were overwhelmed by the big number of new arrivals."

Jan Egeland, secretary-general of the Norwegian Refugee Council and former head of United Nations humanitarian and relief efforts, said he hopes the fire will finally get EU leaders to take action to help the people who lived in the camp.

"This was a time bomb, now it has gone off and hopefully this is the wake-up call that the leaderships in the European capitals need," he told DW. "The people of Moria should have been re-located years ago.

"Remember when the banks were threatened some years back, there were meetings every week to save the banks. Let's have meetings now to save human lives," he added.

European Commission President Ursula von der Leyen wrote on Twitter that she was "deeply sorrowed" by news of the blaze.

EU Home Affairs Commissioner Ylva Johansson confirmed the bloc would finance "the immediate transfer and accommodation on the mainland of the camp's remaining 400 unaccompanied teenagers and children."

The UN estimates that there are around 4,000 children among those displaced by the blaze.

"We have been informed about reports of tensions between people in the neighboring villages and asylum seekers who were trying to reach Mytilene's town," the UN's refugee agency said in a statement.

The migrants were being held on a highway near the camp by Greek security forces.