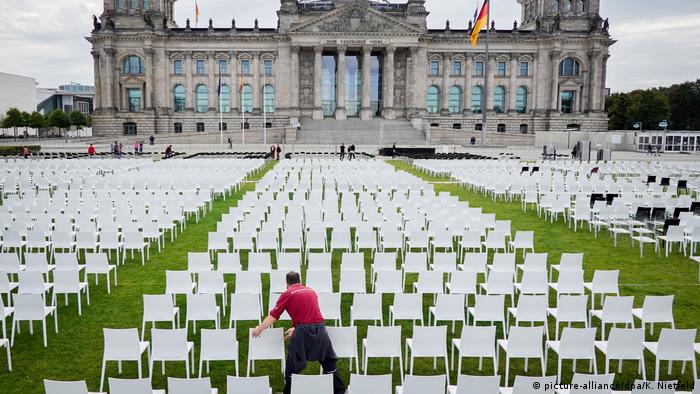 Refugee relief organizations are setting up thousands of chairs outside the German parliament in Berlin on Monday, to call attention to the overcrowding in a migrant camp on the Greek island of Lesbos.

The 13,000 chairs were set up at the "Platz der Republik" in front of the Reichstag building as part of the nationwide anti-racist action days of "We'll come united."

The chairs should symbolize the inhabitants of the Moria camp on Lesbos and Germany's willingness to take refugees in.

They are meant to represent the "people from Moria and all overcrowded camps on the external borders of the European Union," the organizations said in a statement.

The activists are calling on politicians to "finally put an end to the humanitarian catastrophe at the European external borders and evacuate the camps."

Similar actions are also taking place in several other German cities and in Vienna.

In addition to the immediate evacuation of all camps, groups are demanding that individual states "make use of their leeway and decide on state reception programs."

They are also urging the government to develop a sea rescue program. Until then, "civil actors should no longer be criminalized and states must fulfill their duty to rescue at sea," the statement said.

"Human rights violations such as illegal repatriations and mistreatment of protection-seekers by EU states must be stopped. The German government must ensure that this is done within the framework of the German EU Council Presidency," the groups said.

The organizations, including Aktion Seebrücke, Sea Watch, and Campact say that the first confirmed case of coronavirus at Moria adds urgency to the long-standing calls for the camp's evacuation.

Greek authorities last week imposed a 14-day quarantine on Moria after one man who had been living in a tent outside the camp fence tested positive for the virus. Germany has agreed to take in a total of 243 children from camps in Greece who need medical treatment, as well as their closest relatives. However, the advocacy organizations say that is not enough. So far, 99 children have arrived.