Lampedusa officials are struggling to cope as more and more migrants reach the island, pushing its only reception center to its limits. The local mayor slammed the government's "frightening silence" on the issue. 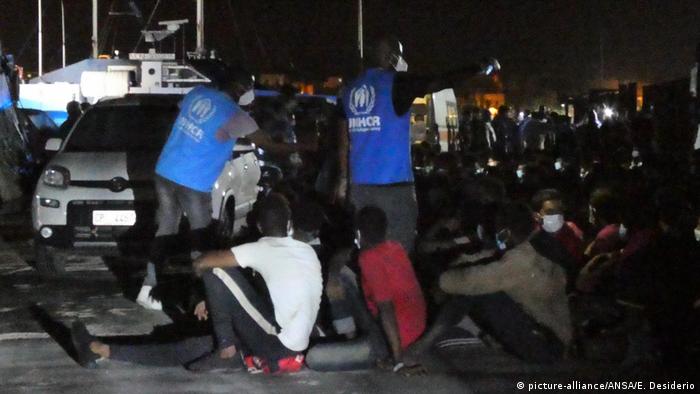 Tensions over an uptick in the arrival of migrants and asylum-seekers in Lampedusa culminated with the mayor of the southern Italian island calling a strike on Sunday.

Weeks of new arrivals have pushed the island's local migrant reception center to its limits. Some local residents staged a demonstration on Sunday after the overnight arrival of a fishing boat that was carrying 450 people on board.

The local emergency center, which is designed to accommodate fewer than 200 people is now housing around 1,200.

The island 'can no longer cope'

Mayor Toto Martello said the general strike will begin on Monday after he meets with representatives of professional organizations and that "shops will close."

"Lampedusa can no longer cope with this situation. Either the government takes immediate decisions or the whole island will go on strike," Mayor Toto Martello told ANSA news agency.

"We can't manage the emergency and the situation is now really unsustainable."

The Sunday protest, organizedby the far-right, anti-immigrant League party, saw some locals laying down on the ground and shouting "Enough" at authorities who arrived to assist the new arrivals.

Mayor Martello expressed surprise that the fishing boat managed to arrive within a few kilometers of the island without being noticed by the Coast Guard or by military vessels taking party in the European Union's Frontex mission.

The mayor also decried the government's "frightening silence" on the situation in Lampedusa.

Nello Musumeci, the right-leaning leader of the island of Sicily, urged for Italian Prime Minister Giuseppe Conte to call for a Cabinet meeting on the "humanitarian and health crisis."

"Lampedusa can't do it anymore," Musumeci stated, adding that his own island of Sicily "cannot continue to pay for the indifference of Brussels and the silence of Rome."

As the European Union continues to debate how to handle the arrival of refugees and asylum-seekers, thousands of people are believed to have died making the perilous trip across the Mediterranean Sea — fleeing conflict, poverty and repressive governments in Africa and the Middle East.