The UN says countries must review their approach to migration across the Mediterranean after 45 people recently died in a ship sinking off Libya. It said it was the largest confirmed shipwreck in the area this year. 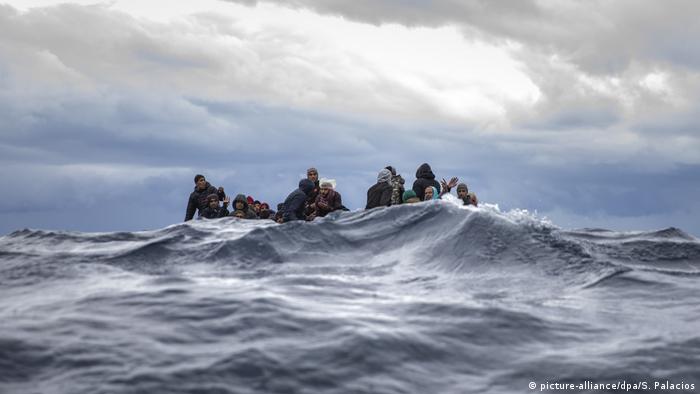 Forty-five people, including five children, died on Monday when their boat sank off the coast of Libya, the UN's refugee agency UNHCR said on Wednesday, calling the disaster "the largest registered shipwreck" in the area this year.

Thirty-seven people who survived the catastrophe, which reportedly occurred after the boat's engine blew up, were rescued by local fishermen and arrested after being returned to Libya, according to the UN's migration agency, the International Organization for Migration (IOM).

The passengers on the boat were mostly from Senegal, Mali, Chad and Ghana.

Both agencies called for a change in countries' approach to the situation in the Mediterranean and Libya, which has become a major country of transit for migrants fleeing poverty and war and wanting to come to Europe.

Deficits in search and rescue

"There is an urgent need to strengthen the current search and rescue capacity to respond to distress calls," they said in a statement, adding that "there remains a continued absence of any dedicated, EU-led search and rescue program."

They also criticized the way countries were hindering the work of NGOs that have been filling the breach left by European states, who have scaled back their efforts to save lives in the Mediterranean.

"UNHCR and IOM are deeply concerned by recent delays in rescue and disembarkation," they said, stressing that "delays recorded in recent months, and failure to assist, are unacceptable and put lives at avoidable risk."

The two agencies also reiterated their view that Libya, which is currently in a state of conflict, was not a safe place for people to be returned to. They said migrants in the country were "at risk of the ongoing conflict, severe human rights violations, and arbitrary detention post-disembarkation."

European states, including Germany, have been giving increasing responsibility to Libyan authorities for saving migrants in distress at sea, and the agencies said this was problematic in view of the human rights situation in the country.

The statement said that more than 7,000 people had been returned to Libya this year alone.

Human rights organizations have reported on widespread mistreatment of would-be migrants in the North African country, which has been enmired in conflict and political turmoil since former dictator Moammar Gadhafi was ousted in a NATO-backed insurgency in 2011.