Migrants in Sicily teach locals how to recycle

One of Sicily's largest cities has been caught between an unexpected migration wave and an increasing trash crisis over the past few years. A local initiative has found a way to tackle both at the same time. 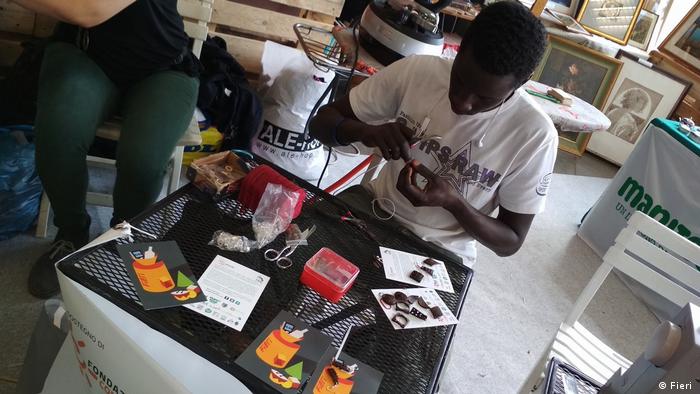 Mariagiovanna Italia busily rearranges trinkets in her stall at a bustling Sicilian market, as some people approach. Spotting a potential sale, she launches into a lively explanation of the products on offer. Migrants made them out of trash, she says.

Italia is project coordinator at Fieri, a social enterprise established in 2015 in Catania. It trains and employs migrants to breathe new life into waste from Sicily's second-largest city.

Purses made of old door handles and African textiles, recycled copper ornaments and discarded furniture turned into wooden souvenirs are just some of the creations to come out of Fieri's trash workshops.

And if there's anywhere that needs to find innovative ways to deal with garbage disposal, it's Catania.

Over the past five years, overflowing dumpsters and waste left to rot on sidewalks under the searing summer sun have been a common sight for the city's residents. Recycle rates are among the worst in the entire country, despite the fact that, in early 2018, Sicily's president Sebastiano Musumeci mandated a recycling goal of 30 percent of waste collected per month across the island.

In October, recycling stood at 5.6 percent, down from 11 percent at the start of 2017, said Viola Sorbello, president of the Catania branch of major Italian environmental NGO Legambiente.

"If we continue this way, the future will not be bright, as waste goes to already saturated landfills at very high economic and environmental costs," said Sorbello. 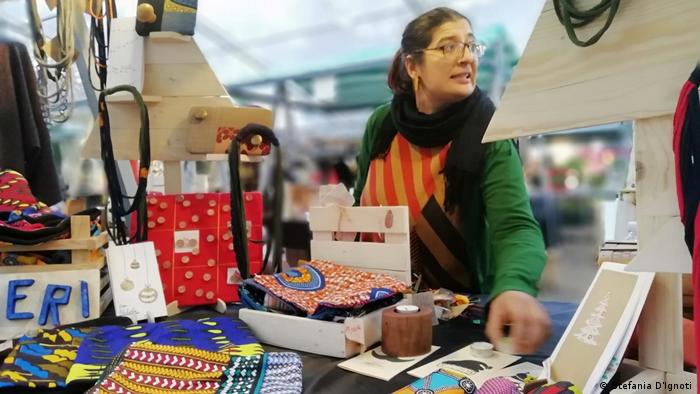 Fieri hopes it can spread environmental awareness in Catania and help to deal with the mounting trash chaos. But it wants to do something more, too.

"We thought of proposing a relief opportunity for the two main crises affecting Sicily: trash and migration," Italia told DW.

For decades, Sicily has become one of the major ports of entry for migrants to Europe, particularly those making the treacherous journey across the Mediterranean Sea from North Africa.

Migrant arrivals to Italy by sea dropped from 170,000 in 2014 to 16,000 in the first half of 2018, according to the International Organization for Migration (IOM).  For the migrants who have been able to stay,  the future is full of uncertainty.

By 2016, just over half of migrants in southern Italy, including Sicily, had secured a job, according to a report by the Italian National Institute of Social Security. Some 38 percent of those jobs were in the agricultural and fisheries sectors, while 30 percent were in domestic roles — sectors in which work is often precarious and underpaid.

The report, which looked at employment among migrants from outside of Europe and from Eastern Europe, concluded the group has also been more severely impacted than Italians by the effects of the economic crisis since 2011.

That's something Fieri has tried to address since its inception. It's trained around 150 migrants, mainly from sub-Saharan Africa, in workshops for soap-making, fashion, jewelry and carpentry. Fieri also has a composter and a garbage collection point, where locals can donate second-hand material and trash to upcycle.

"We didn't want to create just a place that raises awareness about preserving the environment through migrants," said Italia, "but also offer them a solid basis for what comes after the training and social integration process." 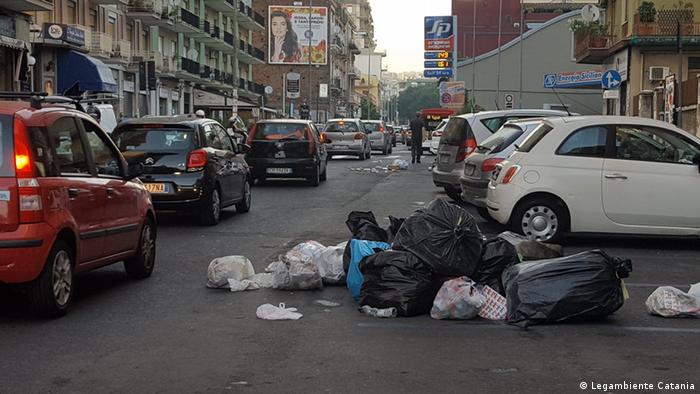 Saikou Ceesay is one of four migrants Fieri employs to teach anyone who walks through its doors how to give refuse a new purpose. The 24-year-old reached Sicily by boat in June 2014 after a six-month journey from his native Gambia, where he had worked as a carpenter, recycling pieces of wood he found in the trash.

He then spent a year in Mineo, Europe's largest migrant reception center, before moving to Austria for a time. Unable to find a job there, he moved back to Sicily, and took up a position with Fieri.

"It's hard to find a job as an African migrant here," Ceesay told DW, adding that Fieri has been a great opportunity for all those involved. "We show Italians that we can actively contribute with the skills we bring and teach sustainable habits many Europeans have forgotten."

The Gambian now wants to open a carpentry shop in Catania that would use only discarded wood. 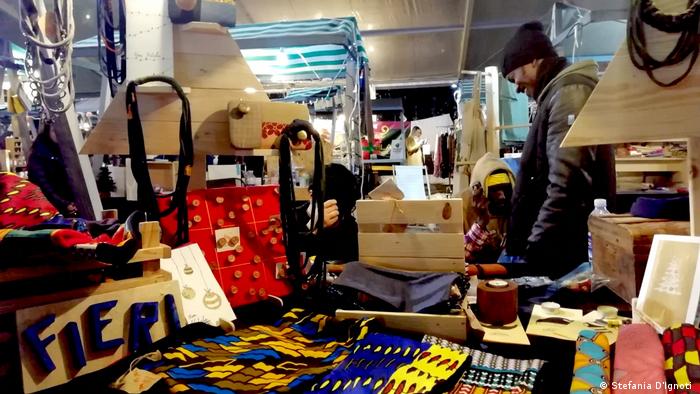 That's an important aspect of the project for the Fieri co-founder — especially given the rise of the right-wing party Lega in Italy. Lega member Matteo Salvini, who's serving as both deputy prime minister and interior minister, campaigned on a hardline immigration message.

"Migrants have so far been a scapegoat in policy-making issues in Italy," said local Alessandra Matarazzo, a volunteer at Fieri. "They've even been pointed out as a cause for increasing pollution and dirt, while they fill roles Italians no longer accept as dignified jobs, such as garbage disposal."

The "intercultural encounters" have also encouraged a number of Italians to help migrants with bureaucratic and translation issues. Anna Piscopo, who lives near the social enterprise, is one of them. She helps those making crafts at Fieri find new markets for their products. These experiences have convinced her that enterprises like this can contribute to social cohesion.

"I think this idea of meeting them in their work space, while they actively do something, will help fight common stereotypes we have in Italy about migrants coming here just to sit and do nothing," said Piscopo. "And that's pretty powerful."

Garbage collection in the Dominican Republic is ineffective and chaotic. But clean streets and a cut in climate-killing emissions could be on the way thanks to new modern facilities and clever management. (09.10.2018)