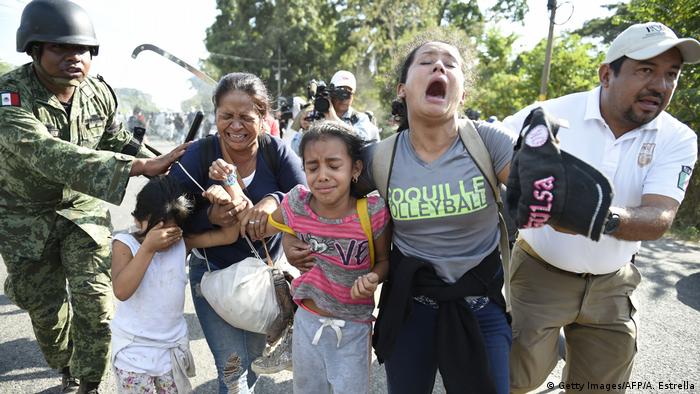 Mexican national guard troops confronted hundreds of Central American migrants on Thursday, at times using force and pepper spray to round up the individuals who had entered the country earlier in the day from Guatemala, with a goal of traveling onward to the United States.

The action is part of a larger crackdown by Mexican authorities that began last year following pressure from Donald Trump's administration to stem the numbers of migrants without papers crossing the US-Mexico border.

Last year, the Trump administration threatened to impose steep tariffs on Mexico if it did not do more to tackle the issue.

The majority of the roughly 800 migrants were Honduran, with others of Salvadorian and Guatemalan nationality. The group had walked for hours along a highway before stopping near Frontera Hidalgo, in Mexico's most southern corner, where they were encircled by hundreds of troops in riot gear that had been waiting in the area.

After a brief attempt at negotiation reportedly failed, some of the migrant individuals allowed themselves to be escorted to the buses that were waiting nearby, while guardsmen used tear gas and pushed and shoved others who resisted. Panic broke out among some women and children. 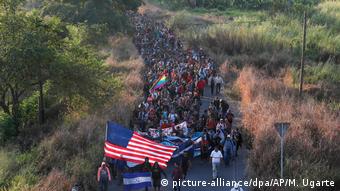 Mexico's Interior Ministry announced Thursday evening that the forces "recused 800 migrant persons of central American origin" who had irregularly entered the border area. It added that a search remained ongoing for another 200 persons who had dispersed nearby.

Jose Luis Morales, the de facto spokesman for the migrant group, told the AP news agency that they wanted to be allowed to negotiate peaceful passage.

"We want to talk with President [Andres Manual] Lopez Obrador directly," read some signs carried by the group, referring to the current Mexican president. Some migrants also said they wanted to request asylum and receive permission to work in Mexico. Many also carried flags of the US and their home nations.

News agencies reported group members expressing fear about returning to their countries and desperation as motivations for their attempt.

Earlier this week, another group attempting to pass through Mexico was halted by national guardsmen. The migrants were bused and flown home later in the week.

Migration authorities in Central American estimated that thousands of migrants attempted to cross the Suchiate River at the Guatemalan-Mexican border on Thursday, taking advantage of a lack of visible authorities. 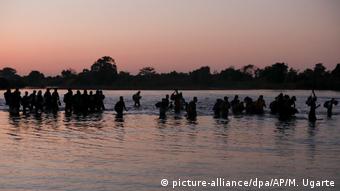 The Suchiate River marks the border of Guatemala and Mexico

So far this year, about 1,800 Honduran migrants have been deported back to Honduras from Mexico, the United States, and Guatemala.

In late 2018 and 2019, large numbers of Central American migrants traveling together in so-called caravans crossed Mexico to the US, many in an attempt to request asylum. US officials intensified the presence of border forces and instituted restrictive and controversial processing orders.

As this year's Summit of the Americas kicked off, a thousands-strong migrant caravan departed Mexico for the US border, with some chanting "Freedom!" and "We want visas!" as they started the 3,000-kilometer journey. DW's Aitor Saez met migrants in Guatemala.

Hundreds of migrants heading to the US stopped in Guatemala 16.01.2022